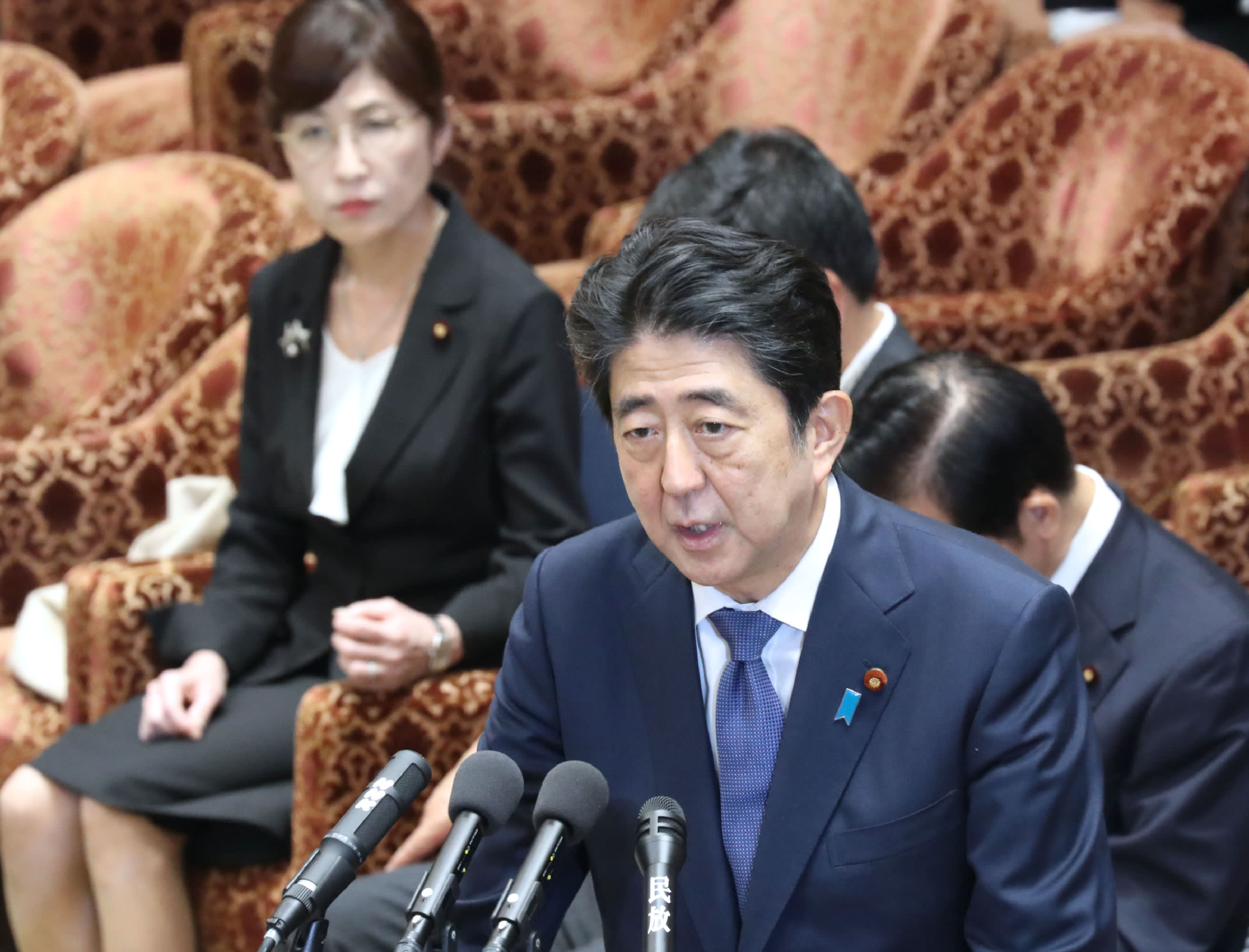 Prime Minister Shinzo Abe responds to questions at a special session of the lower house budget committee on July 24.

TOKYO -- Japanese Prime Minister Shinzo Abe was forced to defend himself at special session of the lower house budget committee on Monday, when he was grilled by opposition lawmakers over the selection process for the establishment of a new veterinary school, won by an institution headed by a close friend.

The interrogation comes after the latest polls show the public feels Abe has failed to explain himself over the issue, pushing his cabinet's approval rating to a historic low. Abe and his opponents remained at loggerheads during the discussion.

The controversy surrounds Kake Gakuen, a private school operator that in January won approval for the establishment of Japan's first veterinary school in 52 years as a part of the government's regulatory reform initiative. Kake Gakuen's chief Kotaro Kake is a longtime friend of Abe's, and a document has emerged implying the prime minister intervened in the selection process. Opposition parties have argued the result was a foregone conclusion.

During the session, Abe was repeatedly questioned by opposition parties over his involvement in the selection process.

In response, Abe said that he had never requested preferential treatment be given to Kake and that the institution had never asked for favors. "There was no request or lobbying [from Kake] regarding the establishment of the new veterinary school," Abe stressed.

Asked if he had intervened in the approval process, Abe said "I have never given instructions regarding specific cases, though I have ordered regulatory reform be advanced swiftly." He said that the first he knew of the plan to establish the school was on January 20, when Kake was selected.

The prime minister did, however, acknowledge that he had not provided sufficient explanation to the public. "It is understandable that doubts have been raised because this issue is related to my friend," he said. "I have to admit the insufficiency [in explaining]."

One of those invited to Monday's committee session was Kihei Maekawa, former chief bureaucrat at the education ministry who has accused Abe's government of distorting the approval process for the veterinary school.

Maekawa claimed he had been spoken to regarding the issue by Abe's special adviser Hiroto Izumi in September "because the prime minister cannot say it himself," and then communicated the message to the relevant department. Maekawa said he was under the impression Izumi was talking about Kake.

Izumi, also invited to the committee, flatly denied the claim: "I didn't say that."

"I said that speed is important [for regulatory reform], but I did not speak about Kake Gakuen at all," he added.

The scandal, together with a number of other issues, has seen Abe cabinet's approval rating fall significantly. 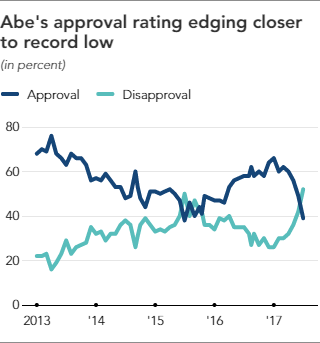 According to a survey taken Friday through Sunday by Nikkei Inc. and TV Tokyo, the approval rating for Abe's cabinet has fallen to 39% -- 10 points down from where it stood in June.

Its disapproval rating, on the other hand, jumped 10 points to 52%, the highest since Abe's second stint as prime minister began in December 2012.

"Cannot trust personality," was the main reason given for disapproval -- provided by 44% of those surveyed.

Regarding the Kake Gakuen issue, 77% of respondents said the government's explanation was "not acceptable."

The growing discontent has been reflected in recent major local elections. The ruling Liberal Democratic Party lost dozens of seats at the Tokyo assembly election on July 2. On Sunday, the candidate backed by the LDP was defeated mayoral elections in Sendai, the biggest city in Northeastern Japan.

What the public makes of Abe's performance on Monday will come out in the next polls. The prime minister could reshuffle his cabinet on August 3, and his nominations will also likely affect his approval rating.