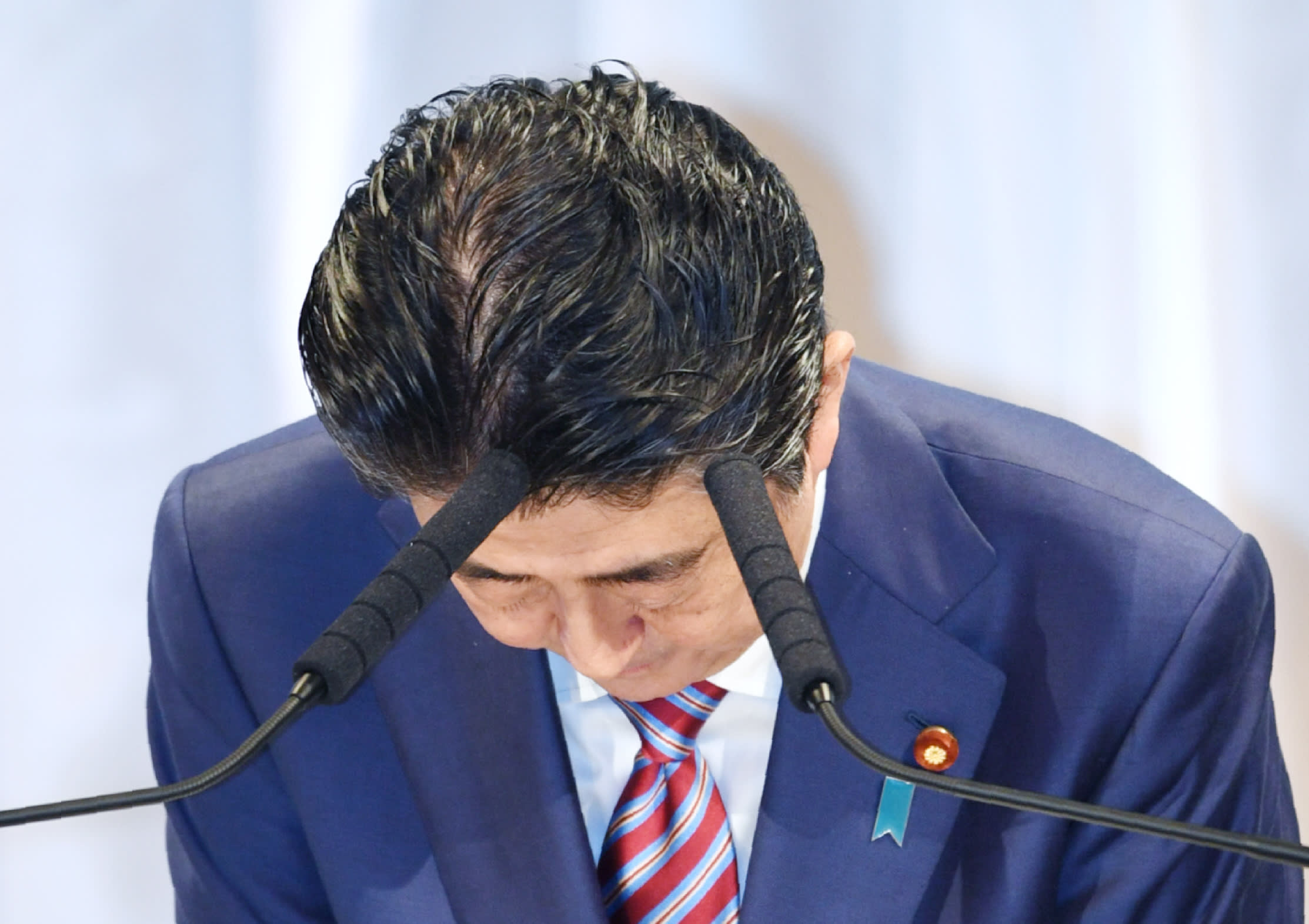 TOKYO -- Support for Japanese Prime Minister Shinzo Abe's cabinet tumbled to 42% in the latest Nikkei/TV Tokyo poll as his government was engulfed by a scandal surrounding the alteration of documents related to a shady land deal.

The survey conducted between Friday and Sunday showed the cabinet's approval rating down 14 percentage points from the previous poll taken in late February -- the sharpest decline of Abe's tenure. The disapproval rating jumped 13 points to 49%.

Support for the cabinet remained solid among LDP supporters at 80% despite a 9-point drop. But its showing among independents was dismal, with approval sinking 14 points to 18%.

The Ministry of Finance's alteration of documents related to the sale of public land to nationalist school operator Moritomo Gakuen has caused an uproar. A full 70% of respondents said Abe bears responsibility for the scandal. A 56% majority said Finance Minister Taro Aso must resign, with just 34% disagreeing. Asked whether Abe's wife, Akie, who also had ties to the school, should testify before parliament, 62% agreed against the 31% considering it unnecessary.

The poll found broad support for a planned meeting between U.S. President Donald Trump and North Korean leader Kim Jong Un, with 74% in favor and only 15% opposed. Asked how the international community should respond to Pyongyang's missile launches and nuclear weapons development, 49% urged tougher economic sanctions. Another 36% said the situation should be resolved through dialogue, up 7 points from a January poll, while 10% said military action should be considered.

The 42% approval rating of Abe's cabinet is not far from the 38% nadir reached in July 2015 amid controversy over national security legislation, or the 39% marked in July 2017 after Abe's ruling Liberal Democratic Party suffered a crushing defeat in the Tokyo Metropolitan Assembly election.

Among those disapproving of the cabinet, 46% said they consider it untrustworthy. Another 36% said they dislike having an LDP-led cabinet, the same percentage citing poor management of the government and the party, while 24% pointed to a lack of clean government. Supporters most frequently cited the cabinet's sense of stability, at 45%. Finance Minister Taro Aso speaks March 22 at a meeting of the upper house's Committee on Financial Affairs. The latest Nikkei/TV Tokyo poll shows 56% of respondents wanting Aso to resign over a school scandal.

LDP support fell slightly to 40% from 42% in the February survey, while support for the opposition Constitutional Democratic Party inched up to 12% from 11%. Unaffiliated voters made up 31% of respondents.

Abe, who previously served as prime minister in 2006 and 2007, is angling for a third consecutive three-year term as president of the LDP. But he appears on shaky footing ahead of the September leadership election, which is shaping up to be a close race.

Just 24% of respondents favored Abe as the LDP's next leader, down from 35% in January. LDP Secretary-General Shigeru Ishiba edged past him, climbing to 25% from 17%. Shinjiro Koizumi, the party's chief deputy secretary-general and son of former Prime Minister Junichiro Koizumi, polled at 22%.

The Nikkei Research survey of individuals aged 18 and older via random-digit dialing received 1,015 responses, for a response rate of 49.6%.