TOKYO -- Plunging public support over unpopular defense-related bills has the ruling Liberal Democratic Party and political pundits scrambling to understand what lies ahead for Prime Minister Shinzo Abe's government. If the past is anything to go by, Japan's leader will have to fight for his survival.

A Nikkei public opinion poll, carried out between July 24 and 26, found that disapproval of the Abe government surged past its approval rating for the first time since his return to power in December 2012. The Abe government was enjoying broad public support for its focus on economic policy. This kept its approval rating above disapproval for two years and seven months, the longest in Japanese modern political history.

However, public favor ended abruptly as the government forced national security-related bills through the lower house despite calls from opposition parties for further debate. The ensuing chaos in the Diet and strong public backlash appears to have driven a significant portion of Abe supporters to switch sides.

Because the bills, planned to pave the way for Japan to exercise collective self-defense, are a signature Abe policy, the fierce public reaction has rattled the ruling coalition.

"All we can do is to continue explaining how we are working to solve big issues in comprehensive ways until we gain the public's understanding," Tomomi Inada, the LDP's policy chief, told a news conference on July 30.

Past examples suggest that when ratings for disapproval overtake approval, it is a fairly accurate indicator of an end to that administration. 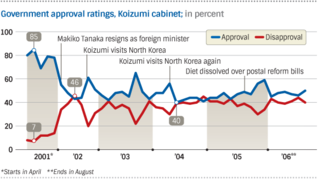 Abe first became prime minister in September 2006. An early opinion poll rated his government at 71% approval. He was riding on strong public expectations as the successor of his highly popular predecessor, Junichiro Koizumi.

But Abe lost his political capital when he welcomed back former LDP members who had left the party over Koizumi's postal reform. Voters saw the move as Abe turning his back against the change spearheaded by his charismatic predecessor.

Abe's disapproval rating exceeded approval for the first time in March 2007. His approval rating took more of a beating when it was revealed some information from public pension accounts had disappeared due to years of sloppy record keeping.

By June, public support for Abe's government had fallen to 36%. It sank further to 27% in July as an upper house election loomed. He was forced to step down as prime minister in September, following the disastrous results of the July election.

One exception was Koizumi. His government's support rating peaked at 85% in June 2001, two months after its formation. The rating declined sharply in 2002 after the highly popular Foreign Minister Makiko Tanaka was forced to step down due to growing antagonism from bureaucrats.

Delays in structural reform, Koizumi's main policy, as well as an unclear economic future, also hit his government. As a result, the government's disapproval rating exceeded the figure for support in June 2002, 14 months after becoming leader.

However, the prime minister managed to turn the situation around. His surprise visit to North Korea in September that year, led to the return of some Japanese nationals who had been kidnapped by the rogue state. This helped the Koizumi government's support rating to surge past 60%.

However, it is important to note that public support for Koizumi and his government never fell below 40%. Generally speaking, an approval rating of below 40% is considered a yellow light for any government, and if it drops below 30%, the signal changes to red. According to this theory, Koizumi had a green light the entire time he was in power.

By contrast, the latest Nikkei poll shows support for the Abe government dropping to the yellow-light zone at 38%. The prime minister and his power brokers must now make difficult decisions: Do they try to regain public support by focusing on economic policies or go for broke and strengthen the "Abe color" in policy management?