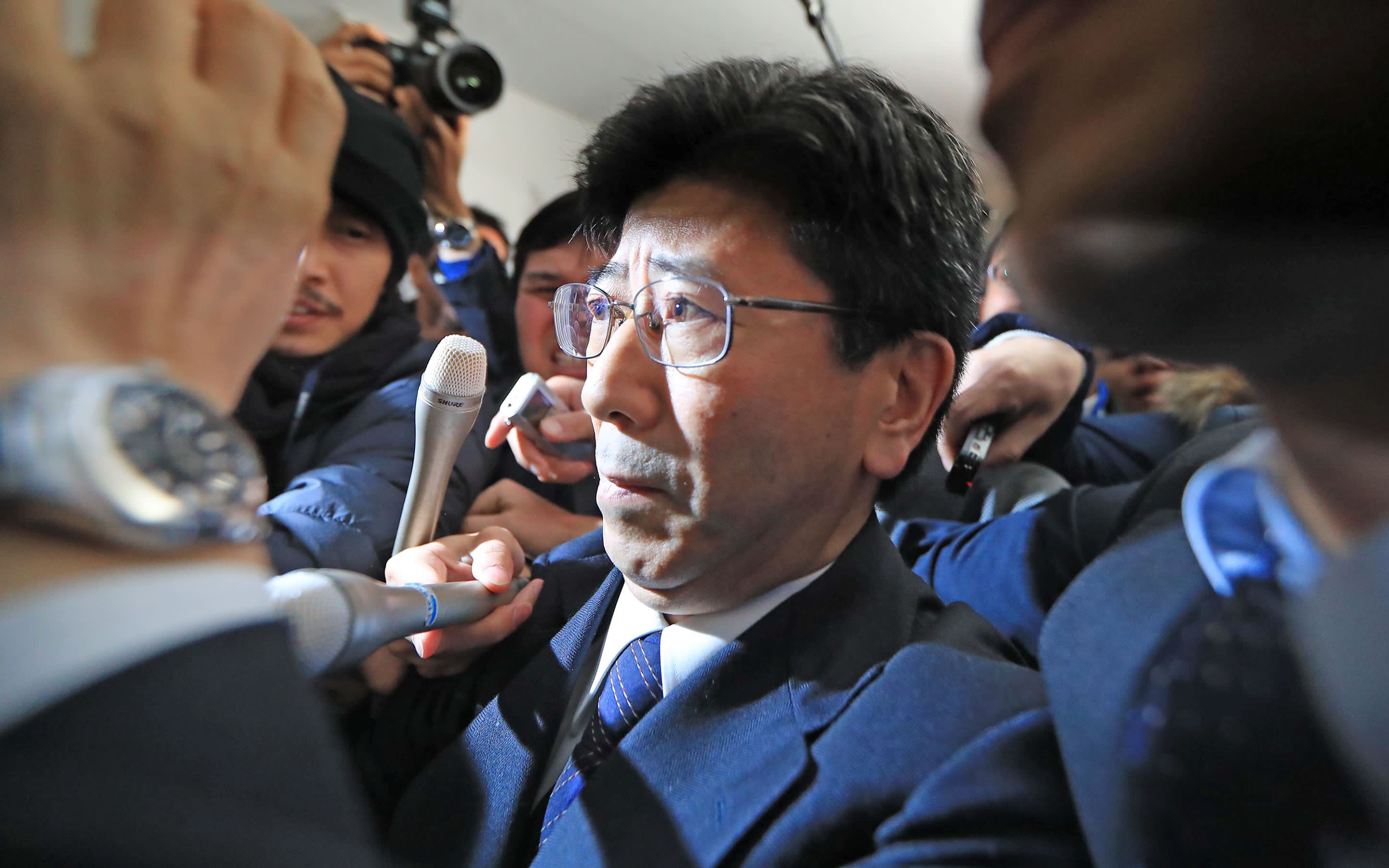 Nobuhisa Sagawa walks to the finance minister's office after announcing his exit as chief of the National Tax Agency on March 9.

As a former director-general of the Ministry of Finance's Financial Bureau, Sagawa had been answering questions from lawmakers about documents detailing the heavily discounted land deal between the government and nationalist-leaning school operator Moritomo Gakuen.

While some in the government said the resignation would bring closure to the long-running scandal, the ensuing saga actually threw unanswered questions into sharp relief.

At issue is the land sale where Moritomo Gakuen, run by Yasunori Kagoike, bought a plot for a new elementary school for more than 800 million yen ($7.48 million) below the appraised value in 2016. Kagoike's personal connections to Abe raised suspicion of favoritism.

The government has consistently denied that Abe played any role in the school operator receiving a steep discount in the deal. The plot sold for a Moritomo Gakuen elementary school in the Osaka city of Toyonaka.   © Kyodo

Sagawa told the Diet in 2017 that documents recording the transaction with Moritomo Gakuen had all been discarded, repeating that there was no procedural issues with the sale.

He took the helm at the National Tax Agency last July, after the Moritomo Gakuen scandal had broken. But internal Finance Ministry documents relating to the land sale have since been discovered.

It was also reported earlier this month that a key document detailing the sales contract might have been rewritten, apparently after the controversy had surfaced in February last year. The discrepancies between the earlier and later versions suggest that the document was altered to erase any evidence that the government negotiated the price with Moritomo Gakuen ahead of contract signing, the report alleged. Sagawa came under fire for his answers to lawmakers regarding the issue.

The apparent suicide of a ministry employee in the section involved in the land sale was also reported Friday. The employee was found dead at his home in Kobe. While no link has been established to the scandal, the news deeply rattled the ministry.

Aso spent more than an hour at a press conference Friday explaining Sagawa's resignation. He cited such reasons as causing confusion in Diet deliberations and criticism of document mismanagement. But Aso failed to touch on the core questions surrounding the land deal that led to the suspicion of document doctoring in the first place. In Aso's telling, that Sagawa was the head of the Financial Bureau that submitted the contract documents to the Diet last year contributed to his exit. Ultimately, the tax chief was held accountable for the allegation that the documents had been altered for Diet submission.

But again, he did not answer whether the documents were actually altered. "We will come out with everything we know at this point," said Aso, promising to continue with the ministry's internal probe.

Sagawa also reiterated his reasons for leaving but did not address those questions. The government may have hoped that his departure would tamp down the latest turmoil. But Sagawa's exit merely left the government scrambling to contain the fallout.

And Aso's vigorous defense of Sagawa could also fuel backlash. The finance minister said he believed Sagawa had been the right choice for the job and had been doing well in his role. If the scandal continues to expand, other top officials, possibly including Aso himself, could be forced to step down, setting off resignation dominoes.

Aso doubles as deputy prime minister and has a particularly close relationship with Abe. While few ruling party members are blaming the finance minister at this point, one lawmaker who has kept his distance from the prime minister warned that the scandal "could end up shaking the Abe government to its core."

The ruling parties expect reports from the Finance Ministry's investigation of the alleged document tampering Monday.

Six opposition parties, including the Constitutional Democratic Party of Japan and the Party of Hope, boycotted Diet deliberations Friday, citing the lack of clarity in the ministry's explanations. Sagawa's resignation is like "a lizard losing its tail" to escape danger, said Kiyomi Tsujimoto, the Diet affairs chief at the Constitutional Democratic Party.

The unity of the ruling Liberal Democratic Party could also suffer, clouding Abe's prospects for re-election as its president this fall.