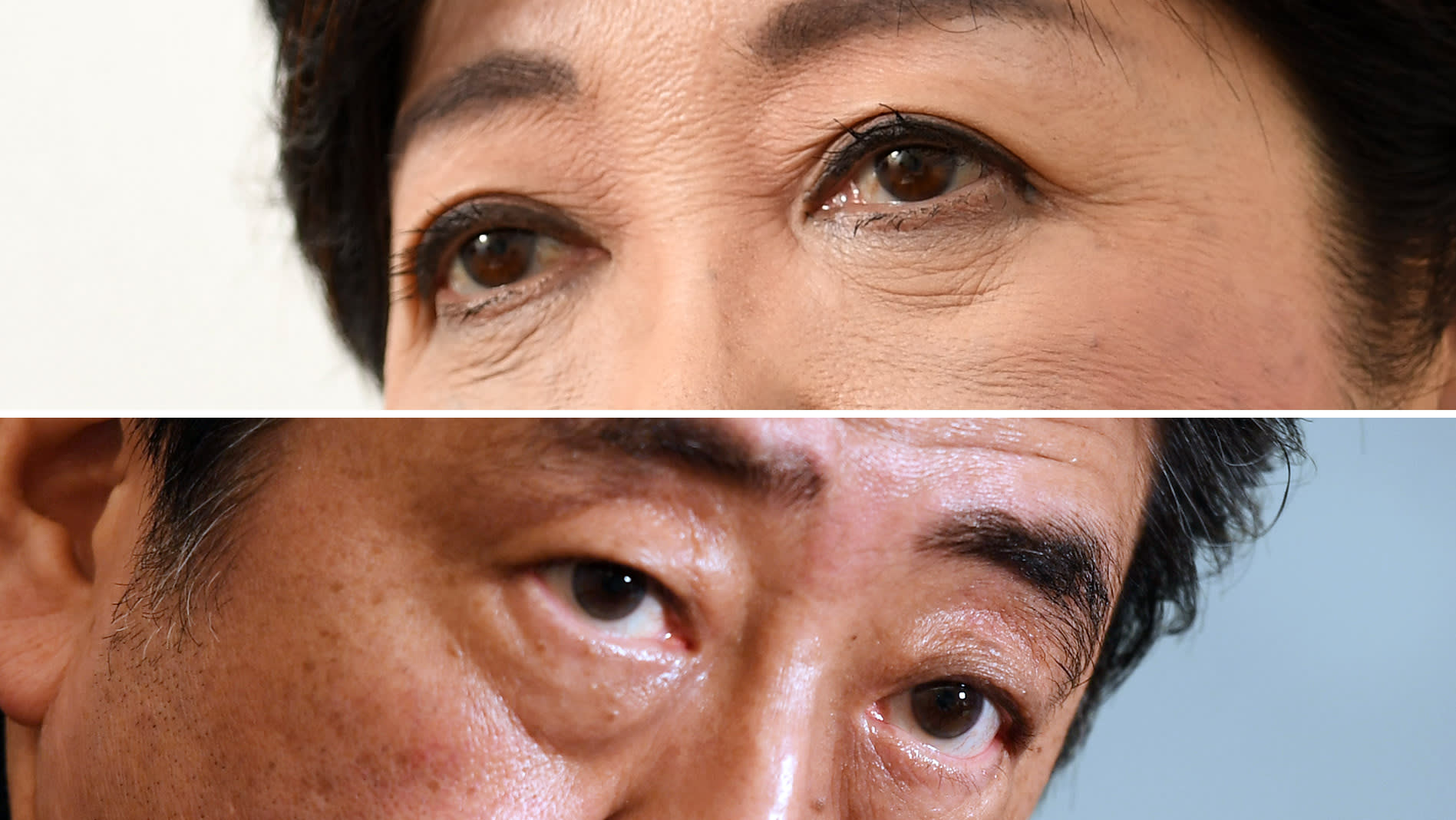 Abe vs Koike: 3 policy differences in clash of conservatives

Japan's election will focus on taxes, nuclear energy and the constitution

TOKYO -- Japan's upcoming lower house election will pit the parties of two staunch conservatives -- Prime Minister Shinzo Abe and Tokyo Gov. Yuriko Koike -- against each other. How will voters choose between them on Oct. 22?

The major differences in their platforms are beginning to crystallize, centering on three key points: taxation, nuclear power and the nation's pacifist constitution. In some respects, voters will be presented with competing visions of big vs. small government.

The campaign manifesto of Abe's Liberal Democratic Party, unveiled on Monday, includes a pledge to raise the consumption tax to 10%, from 8%, in October 2019. The prime minister is determined to follow through on a hike he has twice delayed, but to soften the blow, he is promising to use some of the extra revenue for public benefits. Abe has proposed redirecting around 2 trillion yen ($17.7 billion) of the tax revenue -- money originally earmarked for reducing the deficit -- toward child-rearing assistance and free education. He is selling this plan as an effort to make the social insurance system, which overwhelmingly favors the elderly, work for all generations. This dovetails with his effort to make his pro-business Abenomics policies more inclusive.

Using the revenue this way would effectively scrap a 2012 cross-partisan agreement on tax and social security reform, which set a goal of achieving a fiscal surplus in fiscal 2020.

The LDP insists it has not abandoned its commitment to fiscal rehabilitation, saying it would "firmly maintain the goal of achieving a surplus in the primary balance" of national and local government finances. However, it is no longer committed to a specific time frame.

What about Koike's new Kibo no To, or Party of Hope?

More of a small government advocate, Koike has said she would shelve the tax increase until the economy can handle the impact. She argues the focus should be on eliminating wasteful spending by reviewing the nation's bloated social security programs.

"We will unlock the inherent potential of the private sector, instead of relying on fiscal and monetary stimulus measures," states the Party of Hope's platform, which was shared with The Nikkei. The platform calls this "Koikenomics."

The party says cost-cutting must start with parliament itself, including reductions in the number of lawmakers and their salaries, as well as the abolition of one of the two Diet chambers.

The Party of Hope platform offers no timetable for fiscal rehabilitation but calls for taxing corporate cash reserves, estimated to total 300 trillion yen. The thinking is that this would push businesses to spend more and create jobs.

Abe and Koike are also far apart on nuclear power. The LDP supports keeping nuclear plants running as a "base load" power source, providing stable round-the-clock energy -- contingent upon safety assurances. It wants to restart plants that were shut down after the 2011 Fukushima Daiichi meltdowns, once they meet new safety standards set by the Nuclear Regulation Authority. 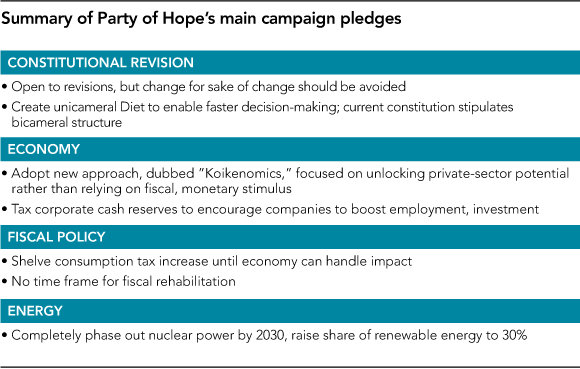 The Party of Hope calls for eliminating nuclear power by 2030, emphasizing a gradual phase-out. "Nuclear power plants that are deemed safe for operation should be used," the party's platform says. It also sets a goal of raising the share of renewable energy in total generation to 30%, without elaborating on how it would deal with possible electricity rate increases triggered by these plans.

Koike appears to be trying to capitalize on the enduring popularity of fellow anti-nuclear advocate and former Prime Minister Junichiro Koizumi, with whom she is close.

Abe's long-cherished goal of amending Japan's constitution could also be a bone of contention. In May, the prime minister raised the idea of updating the charter's war-renouncing Article 9 and adding a clause to recognize the existence of the Self-Defense Forces, while leaving its two existing clauses intact. The ruling party also seeks to amend the nation's basic law to offer free education, better handle emergencies and ensure that all prefectures have at least one representative in the upper house.

Koike questions the wisdom of change for its own sake. It is "difficult to understand why" the government would suddenly add provisions regarding the SDF if it was supposed to have been constitutional all along, she has said. This does not mean the party opposes any constitutional revisions: The platform's call for creating a one-chamber parliament, to enable faster decisions, would require altering the document.

Two-thirds of both Diet houses must approve any constitutional amendment, as must more than 50% of referendum voters.

Aside from the tax, nuclear and constitution questions, escalating tensions with North Korea are sure to make security another focus of the campaign. The details of Koike's position, however, remain unclear.

As a former defense minister under Abe, Koike is thoroughly familiar with the security challenges facing the nation. Some other top Party of Hope figures, such as Goshi Hosono and Akihisa Nagashima, are also considered well-versed on this front.

The LDP, for its part, is touting itself as a party that will "protect this nation." Japan will "lead" the international community's efforts to step up pressure on North Korea to abandon its nuclear and missile programs, the LDP's platform says.