MANILA -- In his final State of the Nation speech as president of the Philippines, Benigno Aquino III declared that his government had curbed corruption, long deemed a barrier to foreign investment, and overseen growth in a country once derided as "the sick man of Asia."

"More than five years have passed since we put a stop to the culture of 'wang-wang,' not only [on] our streets, but in society at large," Aquino said in July 2015. "Wang wang," note James Robinson and Daron Acemoglu, co-authors of "Why Nations Fail," a much-lauded book published in 2012, is a term "derived from the blaring sirens of politicians' and elites' cars urging common people to get out of the way," and is used in the Philippines to refer to corruption.

Aquino's July 2015 speech echoed his first national address as president, five years earlier, in which he asserted: "Do you want the corrupt held accountable? So do I. Do you want to see the end of wang-wang, both on the streets and in the sense of entitlement that has led to the abuse that we have lived with for so long?"

Fighting corruption and building confidence in the country's once-laggard economy have been key themes throughout Aquino's term in office, which is now coming to a close with voters scheduled to elect a successor on May 9.

Certainly, the economy has fared much better under Aquino than it did under his predecessors. Since 2012, two years after Aquino won office in the country's last presidential elections, the Philippine economy has grown at more than 6% a year. Such progress has earned Aquino high praise from the likes of Jose Angel Gurria, secretary general of the Organisation for Economic Co-operation and Development, who called his achievements "impressive" during a visit to the Philippines in late 2015.

New office blocks and shopping malls are sprouting all over Manila and in other big cities, and investment is soaring in sectors such as business process outsourcing, creating hundreds of thousands of jobs for Filipinos.

Clarissa David, a professor at the College of Mass Communication at the University of the Philippines, said that Aquino's presidency resulted in business owners changing their once-negative views of the country.

"His aggressive anti-corruption stance and able handling of the economy brought greater confidence in the quality of governance," David said. "This in turn allowed the private sector, both local and international, to place greater faith in the ability of the country to follow through on policies and reduce leakages in the system."

However, the Aquino government's anti-graft profile has been undermined in recent weeks by a scandal in which the country's casinos were used to try hide $81 million stolen from the Bangladesh central bank by cyber-hackers.

Part of Aquino's perceived success as an anti-corruption reformer is based his own clean image, as opposed to substantive policy changes or an uncompromising clampdown on graft.

"If you look at the positive investor views of the Philippines nowadays, a lot of that is down to the president himself," said Ronald Mendoza, executive director of the Asian Institute of Management Policy Center in Manila.

Aquino peppered his speeches with references to "daang matuwid," a 2010 campaign slogan roughly translating as "clean governance," and with ideas of a "straight path," seeking to place himself as a moral politician, according to Richard Heydarian, political science professor at Manila's De La Salle University.

"He has always been compared with GMA and Erap, and he has consistently contrasted himself with them," Heydarian said, using the popular nicknames for Gloria Macapagal Arroyo and Joseph Estrada, Aquino's predecessors, both of whom were accused of corruption while in office.

But despite the president's clean image and strident tone, Bobby Tuazon, director for Policy Studies at The Centre for People Empowerment in Governance, a local nongovernment organization, believes that Aquino's anti-corruption efforts did not go far enough.

"Only a few key opposition leaders were investigated and detained for corruption but Aquino's allies who were linked to 'pork barrel scams' were spared," Tuazon said, referring to the fact that the Supreme Court was obliged to declare Aquino initiatives such as the Priority Development Assistance Fund and the Development Assistance Program unconstitutional, following allegations that money was stolen from the schemes.

Vice-President Jejomar Binay is running to replace Aquino, but stands accused of corruption during his time as mayor of Makati, the country's main finance hub. Binay and Aquino are not allies, however -- a byproduct of the Philippines' electoral system in which the president and vice-president are elected separately -- which means that enemies and rivals can end up as partners in office. Former interior minister Manual "Mar" Roxas is also hoping to win in the May 9 presidential election -- with Aquino's endorsement -- and pledging to maintain the incumbent's anti-corruption emphasis.

"We have managed the economy well, it has not happened by accident, it is because of daang matuwid," said Roxas, addressing a business forum in Manila on March 17.

"This is to ensure the economy is looked upon very well internationally," added Roxas.

Another candidate, Rodrigo "Rody" Duterte, the mayor of Davao, the main city in the southern Philippines, also wants to maintain the current administration's anticorruption emphasis

However, Duterte's approach is more pugilistic, pledging to assassinate criminals and dump their corpses in Manila Bay, in a continuation of the hard-man tactics he employed during his tenure as Davao mayor.

There, criminals were executed without mercy, earning Duterte the scorn of human rights activists and criticism from Aquino, opprobrium which the Davao mayor had shrugged off.

But asked about Aquino's presidency, Duterte refused to attack the man he wants to succeed, telling the Nikkei Asian Review: "I have yet to review the entire gamut of his governance, and I can only talk about what I think is important and what I will do in office."

Aquino himself sees his governance legacy as positive, citing a six-fold increase in foreign investment coming to the Philippines under his watch. According to him, net foreign direct investment into the Philippines was $1.07 billion in 2010. But the figure reached $6.2 billion in 2014. "This is the highest ever recorded in our entire history," Aquino said in the July address to resounding applause.

But Senator Grace Poe, another presidential aspirant, thinks even those record-breaking numbers can be bumped up. By comparison, FDI into Vietnam, a country with a similar sized population to the Philippines, was nearly $22 billion in 2014. Myanmar, having not long shaken off the shackles of military rule and a much poorer country than the Philippines, attracted $8 billion in foreign investment during the 2013/2014 financial year.

"There are certain things we can improve," Poe told the NAR, saying that not only does Aquino's anti-graft message need to be sustained, but that the country's laws need to be changed to facilitate more foreign investment to create jobs for the millions of Filipinos who still languish in poverty, despite the country's recent growth.

But the penchant among the Philippine elites to endorse each other for high office -- jobs shared between an oligarchy of moneyed celebrity dynasties -- lives on, despite Aquino's high moral tone and the prosecution of his predecessor, Macapagal Arroyo. 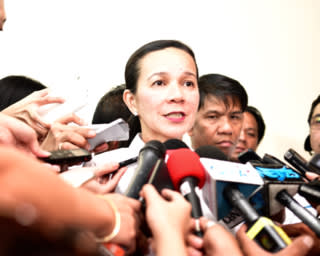 Senator Grace Poe speaking to local press while campaigning for the presidency in Cavite province, south of Manila, on March 17, 2015. (Photo: Simon Roughneen)

Manila mayor Joseph Estrada, who was ousted from the presidency in 2001 by massive street protests against corruption, has endorsed Grace Poe's presidential campaign. But on March 29, he also threw his support behind vice presidential candidate Senator Ferdinand "Bong Bong" Marcos Jr., son of the country's kleptocratic former dictator Ferdinand Marcos, who was driven from office by street demonstrations, like Estrada, in 1986.

For his part, Duterte has promised to pardon the ailing former President Macapagal Arroyo -- a move that might add to the perception of impunity for elites that Aquino had sought to dispel.

"He is the best one to deal with corruption and crime,"said Arnie Barney, a radio deejay, who is campaigning for Duterte. "Filipinos are clamoring for quick solutions [to those issues] and maybe Duterte is the man to do that," Barney said.