All of Thailand readies for late king's funeral in October 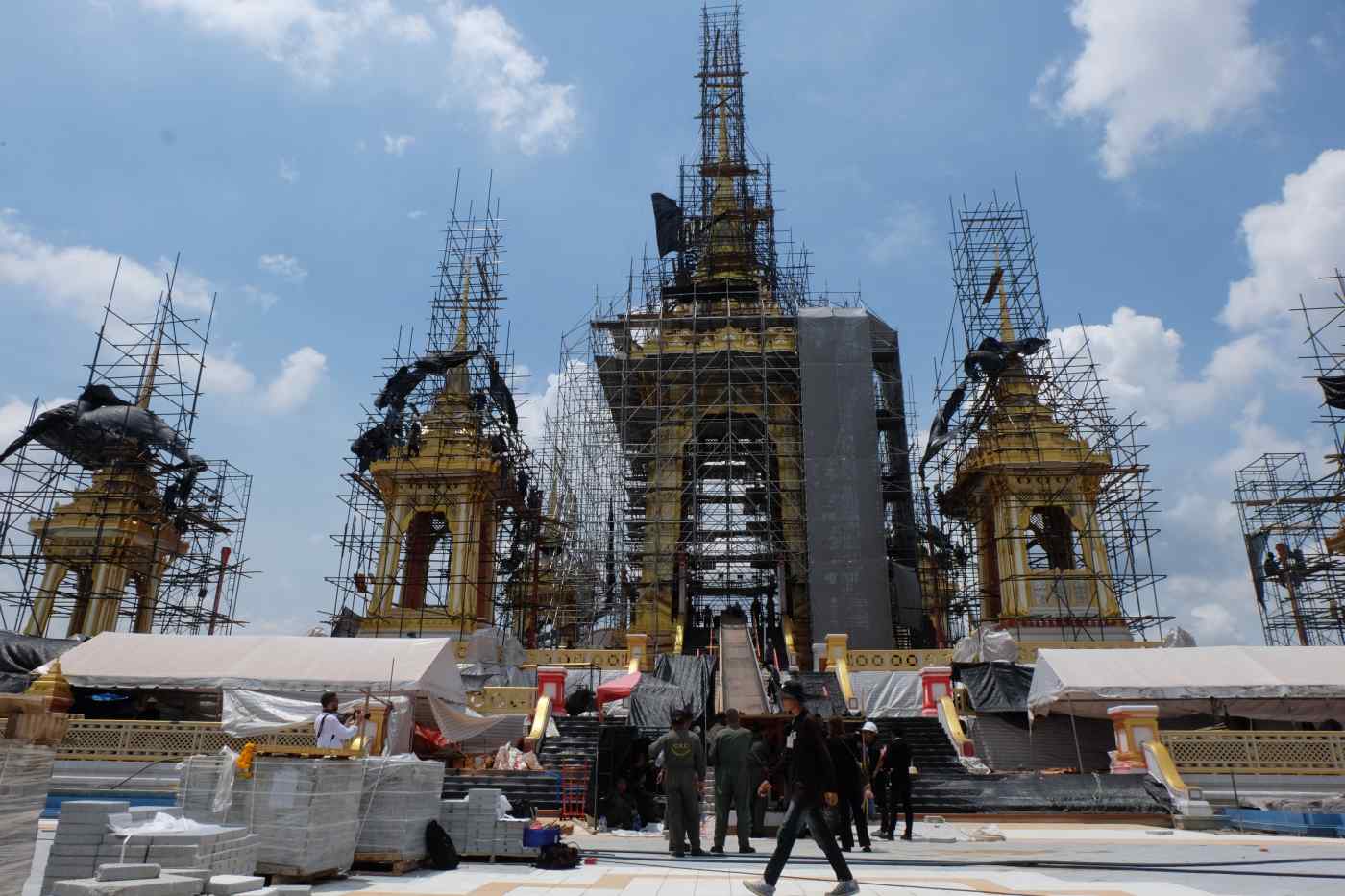 A grand crematorium rises in Bangkok ahead of the funeral of the late king. (Photo by Yukako Ono)
YUKAKO ONO, Nikkei staff writerSeptember 9, 2017 16:36 JST | Thailand
CopyCopied

Although nearly a year has passed since the revered monarch's death, his presence is still strongly felt, and the grand cremation ceremony on Oct. 25-29 will draw thousands of Thais to Bangkok from around the country.

Some analysts are anticipating a period of relative calm in the country's tumultuous political scene as the nation turns its attention to the event.

The ceremony's main stage will be at Sanam Luang, a large park in front of the Royal Palace that is rapidly being turned into a cremation complex. More than 10 buildings -- small and large -- have been built, each for different purposes from Buddhist merit-making rituals to serving food.

Sitting in the center of the complex, which is larger than 30,000 sq. meters, is the golden crematorium. The square structure measures 60 by 60 meters at the base and is 50 meters high, surrounded by water in recognition of the king's contribution on the country's water management system. Artists work on the royal chariot to be used at the cremation ceremony. (Photo by Yukako Ono)

On Oct. 26, a coffin carrying Bhumibol's body, which still lies in the Royal Palace, will be brought here and elevated to the top platform of the crematorium to be incinerated in an electric oven.

The complex can accommodate up to 7,000 people, including members of the royal family, government officials and foreign guests. The general public will not be allowed inside during the funeral but will be able to visit after the rites.

More than 500 million baht ($15 million) has been spent on this complex alone. Construction began in February and is expected to be complete by the end of September.

"It is special for me to be involved in this project because I loved the king," said Pornthum Thumwimol, a landscape architect in the Fine Arts Department. "The king was a living god, and we will now send him back to heaven."

At the Bangkok National Museum, a short walk from Sanam Luang, artists are busy restoring the grand golden chariot and other carriages that will be used in the procession. The grand chariot has been used since the days of Rama I, the first king in the current Chakri dynasty, which was founded in 1782. King Bhumibol was the ninth king of the dynasty. Many mourners still form long queues at the Royal Palace to pay respect to the late king.

Many members of the public also are taking part in the preparations. Volunteers around the country are making artificial flowers out of sandalwood as decorations for the cremation ceremony. Shopping malls, city halls and other public spaces have set up special work spaces for this purpose.

Many Thais are still wearing black as a sign of mourning for Bhumibol, who died last Oct. 13 after a reign of 70 years, one of the longest in recorded history. Long queues form every day in front of the Royal Palace as people from around the kingdom continue to visit to pay their respects, waiting for hours in the heat.

The cremation spells opportunity for some businesses as well. Since thousands of mourners are expected to converge on Bangkok for the cremation, hotels in the area will be full.

The 300 rooms at Royal Rattanakosin Hotel, within a kilometer of the palace, are fully booked for the night of Oct. 25. Rooms sold out soon after the cremation date was announced and Oct. 26 was declared a public holiday.

Thai Airways International is offering special fares for people traveling from domestic cities to Bangkok during Oct. 10-30, starting at 1,390 baht.

Meanwhile, the FamilyMart convenience store chain in Thailand, operated by retail giant Central Group, rolled out a marigold-growing kit in August to grow the yellow flower as a tribute to the late king. Yellow was his symbolic color in accordance with his birthday. The 175 baht kit includes seeds, soil and a pot.

A sense of unity is being created as the whole nation prepares for the big ceremony. This could be a moment of relief for the generals who are running the country, analysts say.

At the end of September, a politically sensitive verdict is to be handed down to former Prime Minister Yingluck Shinawatra for her involvement in a botched rice-pledging scheme. The reading was rescheduled after she failed to appear in court last month.

"Although there may be some political noise in the next month when the verdict is rescheduled, the country will soon enter October, when we have the late king's cremation," an economist who preferred not to be named said. "That will be followed by the coronation of the new king, and there is no room for anyone to cause uncertainty."

Although the date has not yet been announced, the coronation ceremony of King Maha Vajiralongkorn Bodindradebayavarangkun, son of Bhumibol, is to take place after the cremation.