Abe rides high into sixth year with eyes on legacy TOKYO -- Shinzo Abe took to Twitter on Tuesday posting a photo of himself being elected in Parliament as Japan's prime minister for the second time on Dec. 26, 2012, and wrote, "It has been five years. I have a little more gray hair."

While securing unrivaled power through five consecutive national election triumphs, Abe still faces an uphill battle in pulling the economy out of deflation as he enters his sixth year in office.

Including his time in office between 2006 and 2007, Abe is now the third-longest-serving Japanese prime minister in the postwar era after Eisaku Sato and Shigeru Yoshida, who served 2,798 days and 2,616 days, respectively.

If re-elected as president of the ruling Liberal Democratic Party in September 2018, Abe could stay prime minister for a record nine years until September 2021.

Despite the self-deprecating comments on Twitter, Abe was clear about his achievements when asked by reporters on Tuesday morning. "I received strong support from the public in five (national) elections -- three House of Representatives elections and two House of Councillors elections." 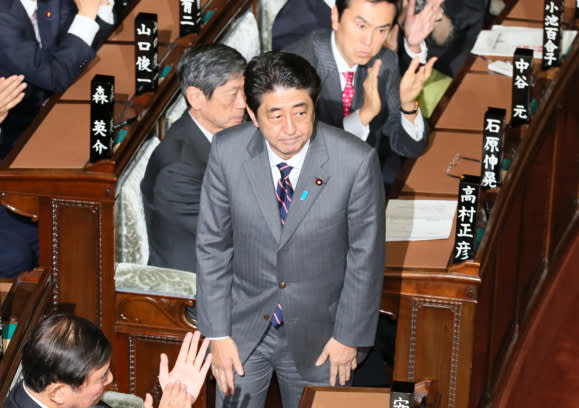 Liberal Democratic Party leader Shinzo Abe is applauded by party members after being elected Japan's Prime Minister by the lower house of parliament in Tokyo on Dec. 26, 2012. (Photo by Ken Kobayashi)

His election gambles have given him the power to make key political decisions quickly.

The economy is now humming along, with the 225-issue Nikkei Stock Average closing at 22,892 on Dec. 26, about 123% higher than when Abe became prime minister five years ago.

Member companies of the Japan Business Federation, the nation's most powerful business lobby, commonly known as Keidanren, agreed to raise wages by more than 2% on average in annual spring wage negotiations for four years in a row.

The ratio of jobs offers to job seekers, a key gauge of the employment situation, has exceeded the levels seen during the so-called bubble economy period of the late 1980s.

The Japanese economy hit a trough in November 2012 -- shortly before Abe's LDP returned to power -- and continued to expand for the 59th successive month in October, marking the second-longest growth streak in the postwar era.

Despite the second-longest economic recovery since the end of World War II, however, inflation remains subdued. The pace of consumer-price rises has yet to reach the target of 2%.

The government claims that the economy is no longer in a deflationary situation, where prices fall continuously, but growth in wages is still sluggish despite a labor shortage that is becoming increasingly serious amid the improving employment situation.

Weak wage growth is a sign that Japanese companies are not confident about the future of the Japanese economy. Japan's potential growth rate, which shows the real power of the economy, remains stuck below 1% despite the effects of Abenomics.

In addition, a major challenge facing the Abe government is to address concerns over whether the nation's creaking fiscal and social security systems can be sustained over the medium and long term.

Japan's fiscal conditions are the worst among developed countries. With baby boomers reaching the age of 75 by 2025, strong upward pressure on social security costs, such as medical care and nursing care, will rise further.

Despite the need to rebuild the nation's coffers to address these concerns, the Abe government has twice delayed a consumption tax hike.

The Abe government has also delayed the target year of fiscal 2020 for achieving a surplus in the so-called primary balance of the national and local governments.

On the diplomatic front, Abe has managed to build a personal relationship with U.S. President Donald Trump. His foreign visits have taken him to approximately 70 destinations. Yet, his diplomacy toward China and South Korea remain sketchy, as can be seen in his inability to set a date for a long overdue trilateral summit.

Abe is hoping for a breakthrough in diplomacy toward Russia in 2018 after the likely re-election of President Vladimir Putin in March.

On the political front, Abe is keen to make a revision to the constitution part of his political legacy. But whether he can drum up broad public support for such a move is an open question.

If Abe wants to realize his long-cherished dream of amending the supreme law, he first needs to maintain public confidence by demonstrating his competence on the economic front. Thus reviving the economy remains his top priority in his sixth year in power.