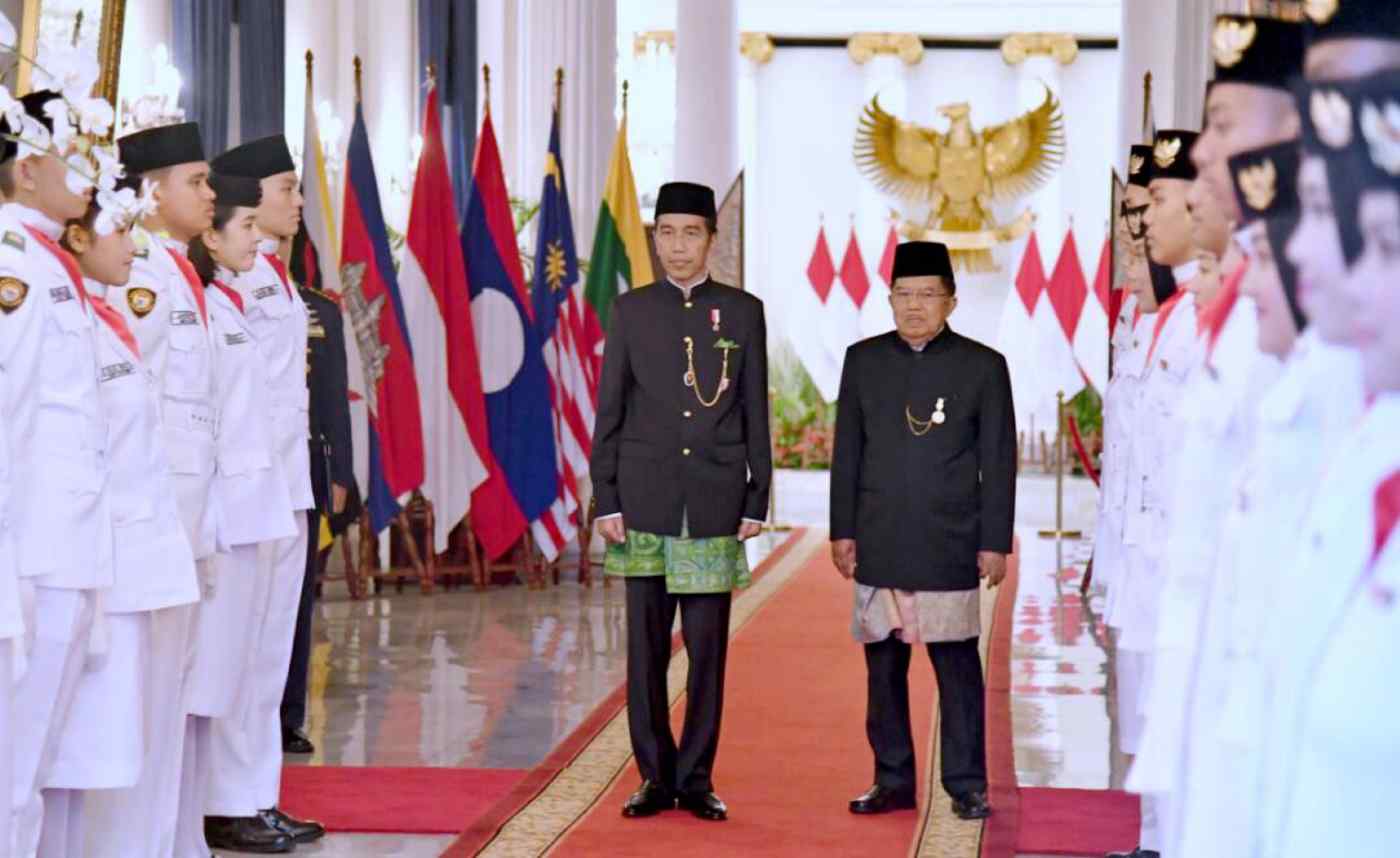 President Joko Widodo has been stressing the importance of Indonesia's five-principle national philosophy, like he did at this Jakarta appearance earlier this month.
JUN SUZUKI, Nikkei staff writerJune 17, 2017 13:04 JST | Indonesia
CopyCopied

JAKARTA -- The growth of foreign direct investment in Indonesia is slowing. The latest data shows that it expanded 0.9% on the year in the January-March quarter. What is weighing down the figure? Religious and ethnic tensions.

Strains emerged during the Jakarta gubernatorial election campaign, which pitted Basuki Tjahaja Purnama -- the incumbent governor, an ethnic Chinese and a member of the Christian minority -- against former education minister Anies Baswedan, who is part of the country's Islamic majority.

Late last year, well before the eventual runoff, Purnama was hauled off to court on blasphemy charges. The one-time favorite for re-election would go on to lose. His offense was quoting a passage of the Koran. This ignited a social media storm that resulted in a two-year prison term.

The government is wary of the rising religious rigidity and the negative effects it could have on economic growth. President Joko Widodo is striving to keep divisiveness at bay.

Recently, the government has been running an advertising campaign that uses the slogan "I am Indonesia, I am Pancasila." This phrase has also found its way into social media.

Indonesia's national philosophy, known as Pancasila, comprises five principles and serves as the basis for acknowledging a diversity of religions, not only Islam, which 80% of the population follows, but also Christianity, Hinduism and other beliefs. It is an ideology created by Sukarno, who was Indonesia's first president, to unify a multireligious, multinational country spread across 17,000-plus islands.

The ideology hit a chord with Indonesians and led to a countrywide open-mindedness. Now, more than seven decades since the country's independence, and as radical Islamic groups gain traction, Indonesia's current government finds itself re-emphasizing Pancasila. In the capital's drawn-out gubernatorial election -- from the end of September to the runoff in April -- fierce anti-Purnama campaigning hit. Although their numbers were small, some Muslims did support Purnama. They paid a price, though, as outright discrimination became a problem. Some mosques even refused to hold funeral services for Muslims who supported Purnama.

In November, a protest against the Jakarta governor turned violent and left casualties. In December, 300,000 Muslims joined prayers in the capital, demonstrating strength through numbers. While the incidents highlighted the power that the country's Islamic groups can wield, in reality not many Indonesians actively support radical Islam.

Yet the growing presence of Islamic groups and the frequency with which large protests have taken place are weighing on the minds of global investors.

Foreign investors seem to remember the May 1998 riots in Jakarta, when mobs assaulted ethnic Chinese minorities, leaving more than 1,000 dead. Looting and arson paralyzed the country's economy. Expatriates had no choice but to flee.

Given that Indonesia is politically and economically more stable now, it is extremely unlikely that the country will fall into a similar tailspin. Still, religious and ethnic conflicts have created a palpable atmosphere.

On June 1, Pancasila Day, Widodo announced he would set up an organization to maintain and spread the principles of the national philosophy. The team is to directly report to the president. Widodo also said the government would step up a crackdown on actions that provoke religious or ethnic conflict.

Now seemingly preoccupied with healing divisions, the central government is being criticized for not tending to the economy.

Widodo took office in October 2014. He began by prioritizing economic policy. One package he introduced includes 14 measures, from improving the investment environment to easing foreign capital restrictions to promoting e-commerce. He also integrated offices in charge of OKing infrastructure and other development projects, enabling basic approvals to be given in as little as three hours.

The reforms excited entrepreneurs. However, the government has not introduced any new economic packages since the end of last year. It even seems to be losing its ability to communicate its economic vision.

Foreign direct investment has been decreasing. In the first quarter of 2016, FDI increased by double digits. Since then, FDI growth has come to a near halt. The slowdown has been particularly notable in recent months. FDI expanded by 2.1% in the October-December quarter of 2016, then by 0.9% in the recent January-March quarter.

The trend has coincided with the growing social divide that manifested itself during the Jakarta gubernatorial election campaign and Purnama's trial.

In mid-May, Widodo attended a summit related to China's Belt and Road Initiative. Discussions with Beijing officials touched on developing a port on Sumatra, the Indonesian archipelago's largest island. Several days before the meeting, Luhut Binsar Pandjaitan, coordinating minister for maritime affairs and a Widodo confidant, felt obliged to say that Chinese investment is not an invasion.

The Widodo government has a plan to build about $460 billion worth of infrastructure. The private sector would cover about 70% of the bill. To accelerate these plans, foreign investment is crucial.

Maintaining social cohesion is important, but so too is keeping global investors interested.