HONG KONG -- Three years after the pro-democracy uprising that gave the Umbrella Movement its name, the draconian government crackdown is raising concerns over a chilling effect as three student leaders serve time and others stand trial. 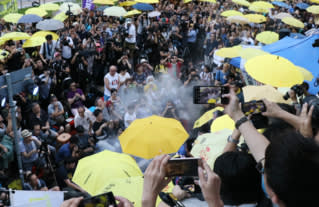 Activists attend a rally to mark the third anniversary of the Occupy Central pro-democracy movement in Hong Kong on Sept. 28. (Photo by Shinya Sawai)

The Chinese government had promised to introduce direct elections for Hong Kong's chief executive, starting in the spring of 2017. But in 2014, it put in place a system allowing only prescreened candidates to run. Students and residents took to the streets to call for true universal suffrage.

At 5:58 p.m. on Sept. 28 that year, Hong Kong police sprayed tear gas at protesters. The crowd opened yellow umbrellas to shield itself.

Participants peaked at more than 100,000. But Chinese President Xi Jinping's government would not budge, and police cracked down. The protests lasted over two months.

Benny Tai, the University of Hong Kong associate professor who had advocated the Occupy Central movement, encouraged people to maintain hope even as the government continued its campaign of intimidation.

The authorities are seeking criminal charges against the protesters. Alex Chow, Joshua Wong and Nathan Law, who led the movement as university students, received prison sentences ranging from six to eight months in mid-August. Initially tried in the summer of 2016, they did not receive prison terms, with the court recognizing the young men's courage in speaking out. But the government appealed, demanding harsher penalties.

Imprisonment disqualifies a person from running in legislative elections for five years. Law, who won a seat last September, was recently removed from it on the grounds that he had taken his oath improperly. He cannot run in a by-election scheduled for early next year.

Wong, who was too young to be a candidate in the last election, cannot run in the next one in 2020. His dream of becoming a politician is further deferred.

The legal process grinds on for others, including Tai, with prison terms likely. The Hong Kong government stresses that it has no political agenda.

But concerns remain that these punishments could discourage people from joining pro-democracy movements.

A European diplomatic source expresses worries over the effect on freedom of expression. Some youths, disappointed in the Chinese Communist Party, have started calling for an independent Hong Kong. The mainland is accordingly increasing the pressure on Hong Kong to crack down harder. As Xi has noted, the central government has no intention of condoning any challenge to its authority.

When universities reopened for a new semester in early September, students at the Chinese University of Hong Kong put up banners calling for Hong Kong independence. But the heads of 10 universities condemned this as an abuse of freedom of expression in a joint statement, and the student council voluntarily took the banners down. Suppression of pro-independence expression is starting to seep even into academia.