China expands Belt and Road to the Arctic

Leading huge ships with a total crew of over 20,000, Zheng's ships visited ports across the Indian Ocean, the Middle East and Africa, "not as conquerors with warships, guns or swords" but as "friendly emissaries" sailing treasure-loaded ships, Chinese President Xi Jinping said in the keynote speech of the Belt and Road Forum for International Cooperation held in Beijing on May 14.

One theory has it that several parts of Zheng's fleet passed through the Arctic Ocean in their wooden vessels and discovered Greenland and Iceland -- see former British submarine commander Gavin Menzies' book, "1421: The Year China Discovered the World."

The authenticity of that theory aside, Xi's Belt and Road voyage seems to be taking a similarly ambitious turn north to those icy waters.

Chinese diplomacy with countries and regions bordering the Arctic has intensified greatly in the past two months. Xi visited Alaska and Finland, while a senior Communist Party delegation was just in Iceland and a Norwegian leader visited Beijing for the first time since relations soured in 2010 over the Nobel Peace Prize awarded to Chinese dissident Liu Xiaobo.

This choice of destinations is no coincidence. "Looking at the visit to Finland, Alaska and Iceland, you can see the connection with the Arctic Council's chairmanship calendar," said Damien Degeorges, a Reykjavik, Iceland-based consultant specializing in Arctic affairs.

The Arctic Council serves as the leading intergovernmental forum among countries in the region: Canada, Denmark, Finland, Iceland, Norway, Russia, Sweden and the U.S. The council determines regulations on sustainable development and environmental protection.

"Earlier this month, Alaska hosted a ministerial meeting ending the U.S. chairmanship," Degeorges said. "Now Finland is holding the current chairmanship, and in two years it will be Iceland."

Xi visited Finland en route to his summit with U.S. President Donald Trump in April. After meeting with Finnish President Sauli Niinisto, Xi said Beijing and Helsinki would "seize the opportunity of Finland's rotating chairmanship of the Arctic Council to enhance cooperation in Arctic affairs."

Degeorges also sees the resumption of diplomacy with Norway in the same context. "It was essential for China to normalize relations with Norway, which is a major actor in the Arctic," he said.

The South China Morning Post reported this month that China likely will incorporate the Arctic Circle into its Belt and Road Initiative. "The full name of the strategy will be 'One Belt, One Road, One Circle,' and the circle refers to the Arctic Circle," the paper quoted Tsinghua University professor Li Xiguang as telling a forum in Hong Kong. 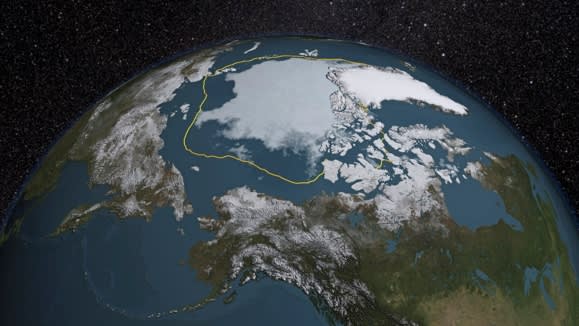 The 2015 Arctic sea ice minimum extent was the fourth lowest on record since observations from space began, according to NASA. (Reuters / NASA)

China's interest in the Arctic is fourfold: as a new trade route, a future source of minerals, an environmental concern and a strategic option. Certain aspects have assumed a new sense of urgency with the faster-than-expected melting of the Arctic ice. Many scientists now think a large part of the Arctic will be ice-free during the summer by 2050.

As a trade route, sailing from Shanghai to the Dutch city of Rotterdam through this northern passage is 6,100 nautical miles shorter than passing through the traditional route using the Strait of Malacca and Suez Canal. If not slowed by icebergs, ship owners potentially can reduce travel by one week, cutting $600,000 per vessel in costs.

But such benefits could be wiped out if Russia commanded high tariffs on icebreakers that lead the ships or for essential support services such as search and rescue. China's lobbying to gain access to the Arctic Council as a permanent observer -- which Beijing secured in 2013 -- was designed to have a seat at the table when such rules were discussed.

Though observer status allows countries to "watch but not speak" at main ministerial meetings, it does let China actively participate in the working groups held more frequently at the council's permanent secretariat in Norway.

Climate change in the Arctic could have dire effects on the weather and food production in China. Rising sea levels may threaten Chinese coastal cities, which are the nation's economic engines.

In terms of natural resources, the region is said to be rich in gold and minerals, as well as holding a significant portion of the world's undiscovered natural gas and oil. Previously locked under thick slabs of ice, these minerals could be up for grabs as ice thins.

The Arctic's strategic importance will increase as the receding ice enables easier submarine access and the possibility for the likes of the U.S. and Russia to deploy missile defense capabilities.

Ming emperor Zhu Di's order to Zheng He's sailors were "to proceed all the way to the end of the earth." While climate change and missile defense were probably not on Zheng's mind, the Belt and Road Initiative's expansion to the north is reminiscent of the Ming Chinese who navigated the globe six centuries ago.