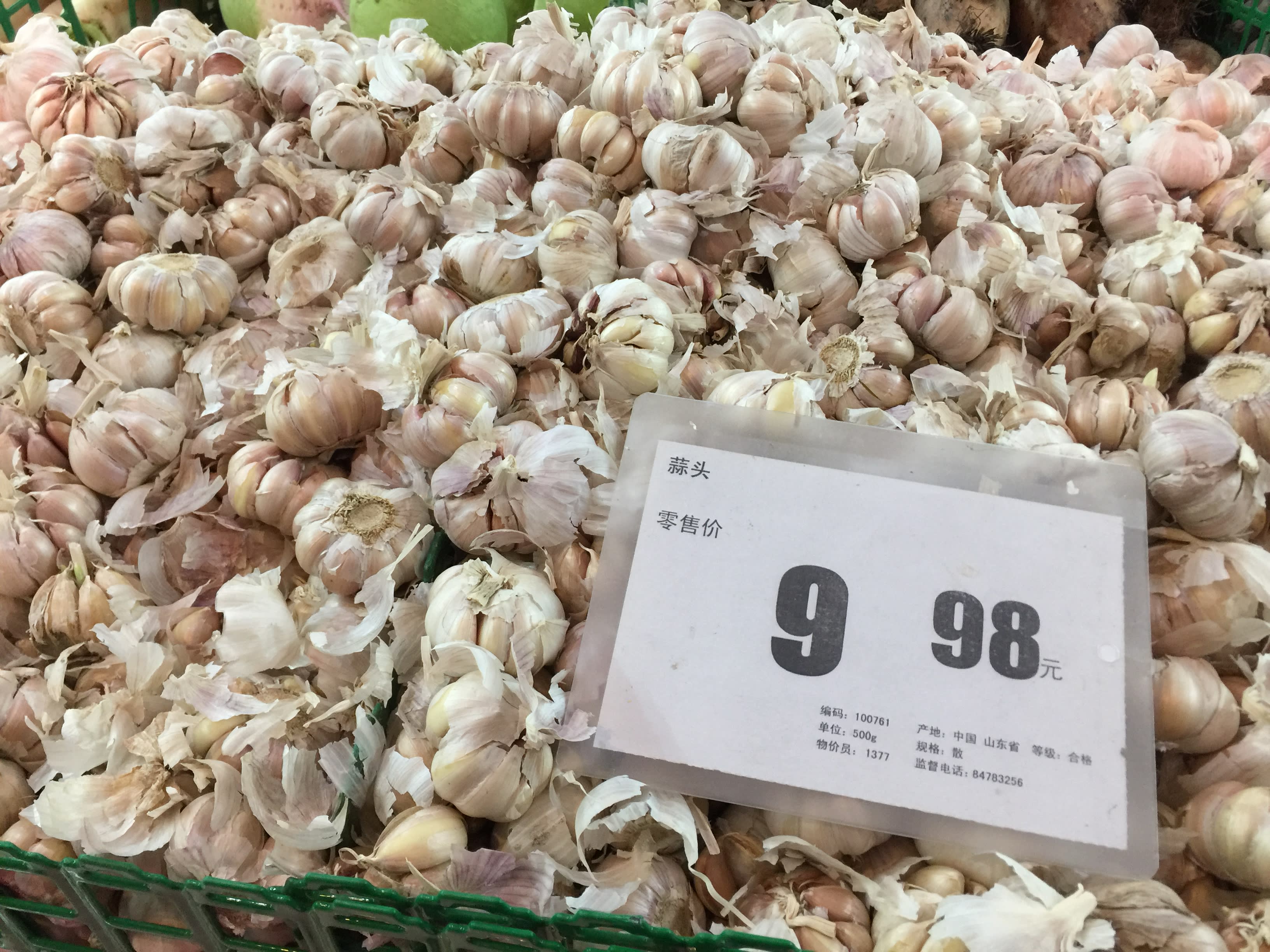 BEIJING -- Chinese local government officials are encouraging farmers to diversify into garlic to correct supply shortages that have nearly doubled prices this year. But fears are growing that the growth policy will lead to a glut, followed by a crash in prices, as the market repeats a pattern seen in pork and other foods.

According to government websites, local authorities in Shandong and Henan, China's major garlic-producing provinces, are offering subsidized insurance programs for garlic growers and loan discounts for traders and processors to encourage farmers into the soaring market, which is boosting local economic activity and raising incomes.

"My observation is that acreage has doubled this season," said Wu Zhiwen, a college student at Henan University who hails from Zhongmou county, a garlic production center in Henan. Wu said his farming family has planted nothing but garlic this fall.

In Shandong, the amount of land devoted to garlic growing has increased by more than 20% during this year's planting season, according to the Shandong Provincial Department of Agriculture. Potential production has also increased in less important garlic centers such as Yunnan, the department's website says.

Subject to China's winter weather higher production should raise supply in early 2017. The most optimistic scenario is that rising output will calm the market. But commodities traders are already warning of the danger of a sharp price correction as too much output floods the market.

Xiejing Wealth, a commodity-trading platform, also warned recently that many garlic traders share refrigeration facilities and tend to sell their stock simultaneously to reduce storage costs, triggering sudden price fluctuations. The combination of higher supply and volatile prices could be disastrous for farmers.

China has experienced garlic booms before. Between 2009 and 2010 a supply squeeze pushed up garlic prices more than 10 times to roughly 12 yuan ($1.74) per kilogram, according to Wind Data, a Chinese market data provider. Prices dropped by 75% in 2011 as the bubble burst.

"The way this tends to work is that news of a tight supply attracts speculators who try to corner the market and drive the price up," said Fred Gale, a senior economist at the U.S. Department of Agriculture Economic Research Service. "It tends to happen when there is a lot of money searching for investments."

In the wake of the global financial crisis in 2008 China implemented an aggressive 4 trillion yuan stimulus program to shore up the economy, with the money supply growing by an annual rate of 28% at the end of 2009, the highest rate in decades.

Besides garlic, hot money also rushed to commodities such as ginger, mung beans, pepper and pork. In 2011, wholesale pork prices jumped from 9.6 yuan per kilogram to 18.5 yuan per kilogram, a 94% surge in six months. The upswing was so significant that it drove up overall inflation. To calm prices, the State Council, China's cabinet, pumped 2.5 billion yuan into subsidized pork production.

The current garlic boom was triggered by a Chinese stock market crash in 2015, combined with increasing liquidity in the money markets, which caused investment cash to flood into the industry as investors sought returns. Wholesale prices reached a historical peak of 14.5 yuan per kilogram at the end of October, more than 90% higher than a year earlier.

The surge has drawn many tongue-in-cheek comments on social media. "I have a bag of garlic in my basement, any girls want to marry me?" wrote one sarcastic user on Weibo, China's equivalent of Twitter. Other Weibo users joked that eating garlic has become a way of flaunting one's wealth.

However, speculative buyers have also pushed up prices in the real estate sector, including an extraordinary surge in the southern city of Shenzhen, where house prices rose at an annual rate of 43% in August. Prices for a variety of commodity futures have also risen sharply, including coke, iron ore and deformed steel bars, which are used for reinforcing concrete in the construction industry.

The government has tried to minimize the bubbles. For example, many municipal governments have introduced measures such as higher down payment requirements and stricter loan standards since September in an attempt to calm house prices.

The National Development and Reform Commission, the agency directing China's economic reform policies, has also issued a number of warnings about commodity price surges since November, and has raised trading costs for certain contracts in an attempt to dampen activity.

The NDRC also announced in November that it will send inspectors across the country to crack down on garlic market manipulation. So far, though, investors remain hopeful that returns will continue at high levels. "We could lose money if prices dive the way they did in 2011," said Wu. "Personally, I hope it remains strong."