MANILA -- Incoming Philippine President Rodrigo Duterte, a former prosecutor, once confessed he was no expert when it comes to economics, prompting him to declare that he would give his economic managers a free hand in running the country. 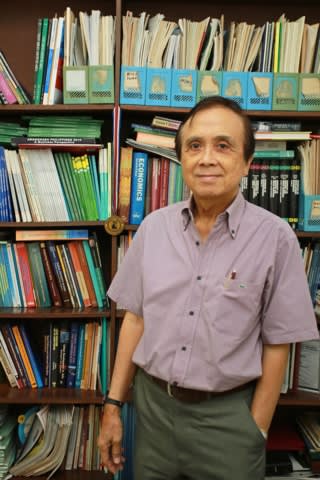 A key figure in his economic team is Ernesto Pernia, the incoming socioeconomic planning secretary and director general of the National Economic and Development Authority.

The University of the Philippines professor and former Asian Development Bank lead economist told the Nikkei Asian Review in an interview Friday that Duterte's administration will rebalance the economy in favor of the poor.

Q: Other economists supported the likes of Sen. Grace Poe and former Secretary Mar Roxas during the campaign. In your case, why Duterte?

A: He is impatient. He acts quickly and gets things done without corruption. Those are the main qualities that I saw attractive in him. He also has good experience in the administration of a government entity like Davao City.

He does not socialize with the oligarchs, with the high society, so that's good because that to me signifies that he is not pro-rich but pro-poor. He is known to be pro-poor, and what we need is a leader who is going to champion the cause of reducing poverty and inequality.

Q: Duterte's victory was partly driven by his promise of inclusive growth. How will his government tackle the problem of inequality?

A: I am interested in dispersing development outside Metro Manila and the Calabarzon region (southern outskirts of Metro Manila) and giving more attention to the regions.

Q: How will the Duterte administration make a difference in terms of poverty reduction?

A: Economic growth under [outgoing President Benigno] Aquino was very little, negligible, and insignificant. In terms of poverty incidence, the proportion of population below the poverty line is almost the same. There was not much improvement in bringing down the percentage of poor in the population.

If economic growth is driven mainly by consumption, it is not going to benefit the poor very much. It doesn't create as many jobs as needed in order to address the poverty problem.

Q: What specific policies are you going to implement to boost these sectors?

A: If we invest infrastructure in agriculture, farm incomes are going to increase [and] agricultural productivity in general will rise.

In terms of manufacturing, the kind of exports that are beneficial are the manufacturing exports as shown very clearly by the experience of Association of Southeast Asian Nations and East Asian neighbors. They were able to bring down their poverty significantly due to investments and exports on the demand side and agriculture manufacturing also.

Q: Domestic consumption has been a reliable growth driver for the Philippines amid weak external demand. Can you give us more details on the scenario that we may see under a rebalanced economy? A: Rebalancing means changing the shares and not absolute value. When you try to increase the share of investment and exports, then maybe consumption will go down from 65% to 55% of the share. You are enlarging the pie of GDP, so relative shares will change without shrinking the GDP.

Q: China's economic slowdown has dragged exports in emerging markets. How can we be successful given this situation?

A: The Chinese economy is rebalancing from exports to consumption. It is going to be a consumption-led economy. There will be a lot of room for exports from us because they will be importing the kind of products that Chinese need, like food and other products that are getting more expensive to be produced in China.

It is good timing because Chinese consumption is going to be ramped up.

A: Yes. But they are all concentrated in Metro Manila and Calabarzon. That is why Metro Manila, Calabarzon and Central Luzon account for two-thirds of GDP in terms of regional distribution. Fourteen regions account for one-third, so you can just imagine the inequality. The three regions' share of population is only 37%, and other regions are not participating much in economic activities.

The inclusivity will really capture the poor, which is really the essence of inclusive growth in the first place.

Q: There have been many programs and pitches in the past with regard to developing the agriculture sector, but they seemingly did little to improve the industry. How will the Duterte administration do it?

A: Those are all lip service. We are going to improve irrigation, improve farm to market roads, improve post-harvest facilities, make high-yielding seeds and tools available to farmers.

There is nothing new. The Department of Agriculture is dysfunctional and corrupt. And the National Food Authority is very corrupt, too, and it is bleeding in terms of deficit. It has the biggest subsidy, and it has the biggest debt burden. That has to be abolished, or they should not be allowed to continue monopolizing the importation of rice.

Q: Are you going to recommend the abolition of NFA?

A: Yes -- and at the minimum disallow NFA's monopoly in importation of rice. We will allow the private sector to have competition. NFA is unnecessary.

Q: You've been quoted as saying that the Public-Private Partnership program will be overhauled by doing away with the standard competitive bidding to get the most suitable contract evaluated by a team of experts similar to a "Swiss challenge." Will that be the policy?

Q: What is wrong with the current PPP program?

A: It is taking so long. It is taking so [much] bidding and rebidding. I don't know exactly how it is going to be done. It will be implemented by a different group. But the main thing is we will speed it up, and we get the best bidder.

The government is also mixing PPP with raising revenue: The bigger the upfront payments, the better. It is confusing. There are too many signatures needed. Cutting down red tape is one of the main objectives or reforms of the next administration. From 70-100 signatures, we may have five or 10 maybe at the most.

Why do we need Tom, Dick and Harry to sign something and get something in return?

Q: Some investors are wary that the shift to federalism will lead to uncertainties and could affect investments?

A: If the road to federalism is made clear, understandable; clarified to investors, to the public, why should there be uncertainties?

Q: Duterte said he wants a three-child policy. How serious is the government in managing the population?

A: That is not an imposition. He is saying that because poor families cannot afford beyond three children. And they want to have fewer children but they don't have access to contraceptives. So it is really just a matter of implementing the Reproductive Health Law.

The law provides for informed choice on the part of the couple regarding the limitation and spacing of children. But that is still their decision. If they can afford 10 children, fine.

The poorest are the fastest growing in terms of population. So if we are really serious about reducing poverty, we have to address the population issue. We have too many people.

We have been saying that [our] economic growth has been the highest in Asia, higher than China in the first quarter, but the backlog in terms of economic growth in the past is so huge, that's why we are left behind. We are just catching up.

So if we grow even 8%, it's no big deal because we are years behind our neighbors in terms of GDP per capita. We need to grow 10% in the next six years, and we would barely catch up with our neighbors.

Q: What is the target growth of the Duterte administration?

Q: Duterte said he will overspend in education. You said we will step up investments in agriculture and infrastructure. Will there be underspending in other areas?

A: It is just a matter of shuffling the budget according to the priorities, or what is going to give us the biggest bang per buck.

Our spending in education is 2-3% of GDP. Our ASEAN neighbors, they spend 5-6% of GDP. I think we should also add promoting science and technology for innovation. Our neighbors spend 1% of GDP for research and development. We spend only 0.15 of GDP.

It's going to be a knowledge-based global economy, and to be a participant of that global economy we need to ramp up investments in R&D.

Q: These would require a lot of funds. How will the government boost revenue collection?

A: If you reduce tax evasion, which is quite substantial -- smuggling, kidnapping, corruption -- that is going to bring in a lot of revenue.