TOKYO -- Rumors are circulating in Japan's political circles that Prime Minister Shinzo Abe might dissolve the lower house and call a general election as early as this year.

These rumors may sound strange, given the current state of political stability. The key to them is taking into account the precarious position of the largest opposition, the Democratic Party of Japan.

Many DPJ lawmakers fear that the party could suffer another crushing defeat if the next general election is held before it is absolutely necessary. Opinion polls have the DPJ's support rate stuck at low levels.

The DPJ has also failed to forge a united front among minority opposition parties in the face of the ruling coalition led by Abe's powerful Liberal Democratic Party. 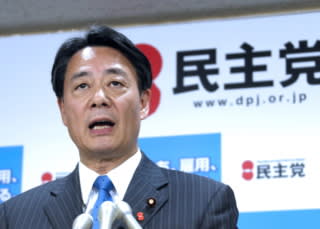 Speculation of an early general election comes despite the widely held view that the next lower house election will be held at the same time as that for the upper house, in 2016.

Members of the lower house  -- the more powerful chamber of the Diet -- are elected to four-year terms. Upper house seats have three-year terms. In the current cycle, both must have elections by 2016.

There have been some new moves within the DPJ amid growing fears of an early general election.

Goshi Hosono, a former DPJ secretary general, attended a party in Tokyo on Sunday aimed at wooing younger voters, where he delivered an impassioned speech. Hosono resigned as DPJ secretary general to take responsibility for the party's defeat in the last upper house election in July 2013.

A group of DPJ lawmakers headed by Hosono, called the "Jiseikai," registered itself as a political body at the beginning of this year. Jiseikai held a fund-raising party in April and a workshop on May 6. Jiseikai is now steadily solidifying its position as an intraparty faction led by Hosono.

Ahead of the fund-raising event in April, Hosono visited many young corporate executives. He told these business people that the DPJ has three strengths: state subsidies to the DPJ that remain unused, which are said to be worth as much as 15 billion yen ($145 million); a nationwide network of regional chapters -- although it may not be what it once was; and the Japanese Trade Union Confederation, a main support group better known as Rengo.

There is no point in defecting from the party, he told these executives, adding that his clique will, in essence, take over the party.

These maneuverings by Hosono are being interpreted as start of his push to be the next head of the DPJ.

The DPJ's incumbent president, Banri Kaieda, has stayed in his post despite the party's humiliating defeat in the last upper house election. He said immediately after that election that, "If I fail to achieve tangible results within one year, I will never stoop to asking to be allowed to stay on as party leader."

Kaieda's term as party leader is to expire in September 2015. He has failed to score any political points in the current ordinary Diet session. Also, his party lost a lower house by-election in Kagoshima Prefecture in April to the LDP.

Under such circumstances, there are growing concerns among DPJ lawmakers about Kaieda's shortcomings, especially if there is to be an early lower house election.

"We are now completely defenseless," one mid-level DPJ lawmaker said. "Prime Minister Abe will certainly dissolve the lower house and call a general election while Kaieda is still in office (as DPJ head). The next general election will come by the summer of 2015."

Some DPJ lawmakers are calling for the party to bring forward the leadership election to this autumn, ahead of planned unified local elections in the spring of 2015.

Moves to oust Kaieda as DPJ president could emerge toward the closure of the current ordinary Diet session in June.

As such, many people around Abe think that he should allow simultaneous elections for both chambers to happen in 2016. 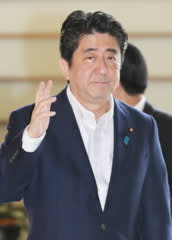 The issue of timing is also linked to the consumption tax, which was raised from 5% to 8% on April 1, and is planned to be further raised to 10% in October 2015.

Abe appears likely to make a final decision in later this year on whether to go forward with the additional tax increase as planned, after carefully assessing the state of the Japanese economy.

One of the special cabinet advisers has said that Abe should delay the next tax hike to ensure that the Japanese economy overcomes deflation. "As simultaneous elections for both Diet chambers are likely to be held in the summer of 2016, the timing of the next tax hike should be April 2017," the official said.

"This means that (Abe) should make a final decision on the next tax hike in October 2016, after the anticipated double elections," the official added.

But if the next tax hike is delayed, the government will not be able to achieve its target of halving the ratio of the primary balance deficit to the country's gross domestic product by fiscal 2015, compared with the fiscal 2010 level. If that target is not met, the markets could interpret it as a failure of Abe's economic policies.

"The prime minister could dissolve the lower house as early as this year in the name of a fresh vote on the need for the additional tax hike, while forestalling the realignment of opposition parties," a two-time DPJ lower house member said.

One former top bureaucrat at an economic ministry echoed this sentiment, saying, "There is no guarantee that the yen's weakness, high stock prices and an economic recovery will continue until 2016."

"The prime minister could even call an election by the end of this year before making a final decision on the next tax hike," the former official added.

Former Prime Minister Junichiro Koizumi once described the right to dissolve the lower house for a general election as "a prime minister's greatest power." Political attention will now be focused on how Abe might exercise that power.