SINGAPORE -- It was no more than a glance, but Aye Aye Win's respectful mid-sentence nod toward her 83-year-old father said as much as anything else about why she wants to remain in Singapore after three decades in the city-state, away from her family in Myanmar.

The old man, Maung Htay, had been in Singapore "for a few weeks" to get medical treatment that Aye Aye Win said was out of his reach at home -- a legacy of decades of meager health spending by Myanmar's long-ruling military junta. 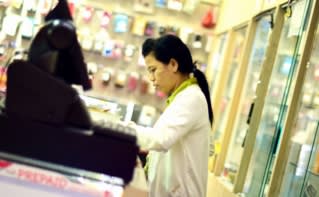 She runs a small shop in Peninsula Plaza, a vibrant commercial complex that is the center of Myanmar life in Singapore. Women, their cheeks painted with cream-colored thanaka -- a Myanmar cosmetic made from tree bark -- perch on high stools behind shop counters selling cellphones. Other shops selling longyi -- a Myanmar version of the sarong -- sit alongside restaurants dishing up Myanmar staples such as tea-leaf salad and mohinga, a popular curried fish and noodle soup.

"I plan to stay here, though I know a lot of people who are going back," said Aye Aye Win, discussing the reasons why some of her compatriots in Singapore have returned since Myanmar's military-backed regime launched sweeping political and economic reforms five years ago.

With jobs scarce during the latter decades of military rule, hard pressed citizens emigrated in droves, mostly to Thailand, where an estimated 3 million Burmese migrant workers live, but also to Malaysia, home to several hundred thousand Myanmar workers, as well as Australia, Japan, the U.S., and countries in Europe and the Gulf. Singapore skyline near Marina Bay. The city-state's wealth and abundant job opportunities have been a powerful lure for many migrants. (Photo by Simon Roughneen)

Aye Aye Win was one of an estimated 50,000 Burmese who moved to Singapore, a popular destination for migrants from around the region because of its openness to foreign workers, relatively high salaries and developed economy. According to World Bank figures, gross domestic product per head in 2014 was just $1,203 in Myanmar, compared with $56,284 in Singapore.

Since 2010, however, Myanmar's economy has grown by about 8% a year and foreign investment has rocketed from $329 million in 2009-10 to $8 billion in 2014-15. Many Western and Japanese companies have returned to the country after shutting up shop because of international sanctions and the difficulties of operating in an economy notorious for opacity and corruption.

Despairing of finding work at home, 30-year-old information technology consultant Lin Htet Aung moved to Singapore after graduating eight years ago, but has been thinking about going home since Myanmar's reforms began taking effect. "I saw a lot of people from other countries doing business in Myanmar, so I said, 'why not me?'" he said.

After a half-decade of reforms, and with the opposition National League for Democracy set to take power in March after a crushing electoral victory in November, many other Myanmar migrants in Singapore are considering a return home.

"It seems that for overseas Burmese who have some amount of savings, the thought of returning home is always in their minds, even if they have stable jobs in Singapore," said Shaun Cheng, a Singaporean who set up LearnBurmese.com.sg, a Myanmar language school, in 2014.

Speaking on Jan. 14, Lin Htet Aung said he planned to move back to Yangon, Myanmar's biggest city, "in around a month," saying that despite Singapore's wealth, Myanmar offered better long-term prospects. "There will be new opportunity [sic], new market, you cannot do it here, the market is full here," he said.

Lin Htet Aung's sanguine outlook stems from a belief that Myanmar will change when the military old guard that dominated and oppressed the country for five decades makes way in March for Aung San Suu Kyi, the NLD leader. Suu Kyi, who says she will run the next Myanmar government "from above," languished under house arrest for nearly 15 years until late 2010. However, not all Myanmar people in Singapore are as buoyant as Lin Htet Aung. "We argue about this all the time," said Noel Myint, 37, another IT consultant and close friend of Lin Htet Aung. "As a Burmese, for me, the changes are just cosmetic, a different wrapping, but inside is the same thing as before," Myint said.

Not even the NLD's overdue ascent to office will make a difference, at least for a few years, he said. "They will need at least five to 10 years to effectively change something," Myint said. "I do not see myself going back for another five or 10 years."

While Myanmar's economy has grown quickly over the past half decade, the growth has mostly benefitted big cities such as Yangon and Mandalay, where there have been recent signs of a falloff. Some construction projects in Yangon have stalled, while some investors have stood back, awaiting a new investment law and the scheduled takeover of government by the NLD. More than half the population lacks electricity, and vast swathes of rural Myanmar are mired in poverty.

There has been "some change, but in the countryside, it is very poor," said Swe Min Oo, 24, who followed his IT consultant wife to Singapore, where he works as a travel agent. "I want to learn this business and then work in tourism in Myanmar," he said, describing living in Singapore as "an investment," albeit one tinged with sadness; he and his wife left a three-year-old son in Yangon with his grandparents.

"We both have jobs, [but] we cannot pay for childcare here," Swe Min Oo lamented. "In another three or four years we hope to move back to Rangoon," he added, using a former name for Yangon. 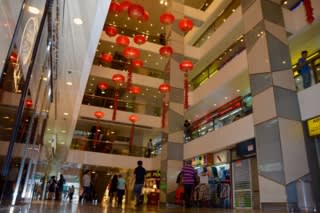 On the ground floor of the Peninsula Plaza mall in Singapore, a popular meeting point for the city-state's Myanmar community (Photo by Simon Roughneen)

A few doors away inside Peninsula Plaza, displays showing new apartment blocks being built in Yangon stand in office windows, accompanied by appeals to passers-by to enquire about prices and availability.

Despite his skepticism about Myanmar's reforms, Myint acknowledged that the prospect of work in Yangon's construction sector had induced "many" of his friends in Singapore to return to Myanmar. "Some of them are architects and are doing quite well," he said.

A few steps away from the apartment block models, Aye Aye Win's shop sells more down-to-earth reminders of the old country -- goods that cannot be found elsewhere in Singapore. "Myanmar newspaper, Myanmar music, Myanmar food, Myanmar traditional cosmetics, we have all these," she said.

Peninsula Plaza is a home from home -- one in which Aye Aye Win seems settled -- but Maung Htay hopes his daughter will return to Myanmar eventually. "Before I die I am hoping one day my daughter will move back," he said, his fluent English tinged with the refined intonation for which Suu Kyi is known -- an accent Maung Htay said he picked up working "for a British mining company" six decades ago.

Before Aye Aye Win could reply to her father's plea to join him back in Yangon, a rush of customers demanded her attention. Maung Htay, wrapped in a jacket and woolly hat, sighed as he sat inside the air-conditioned mall. "I am from the dry zone, central Myanmar [where temperatures can exceed 40C]. I find this so cold," he said.