For fish to recover, countries must cooperate: Japan official Catches of the Pacific saury, called sanma in Japanese, have declined drastically of late.   © Kyodo

TOKYO -- Cooperation with neighboring countries will be crucial to restoring stocks of Pacific saury and other fish facing marked declines in catches, says the chief of the Japan Fisheries Agency.

In an interview with The Nikkei, Director-General Shigeto Hase also called for fishers to strictly manage their catches of the badly overfished Pacific bluefin tuna. Edited excerpts follow.

Q: Catches of Pacific saury in 2017 were the poorest in 48 years. Hauls of other staple species like the Japanese flying squid and salmon have also declined.

A: Changes in water temperatures and other aspects of ocean environments have affected the growth of young fish, as well as the distribution and migration of fish in general. In the case of saury, we cannot ignore the effects of other countries' fishing operations in international waters. 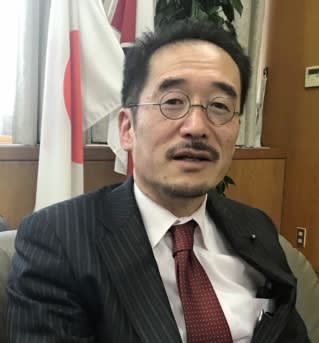 Q: With hauls of marine products growing the world over, regulating Japan alone would have a limited effect.

A: International cooperation is critical. At international meetings [of the North Pacific Fisheries Commission] last summer, talks fell short of capping saury catches by region or country. Hopefully at talks set for this summer, we can forge a path toward managing catch volumes. We need to likewise cooperate with other countries [to manage] mackerel and Japanese flying squid.

We must also crack down harder on illegal fishing by international ships to protect resources in the Sea of Japan region. We will soon establish a head office for fishing oversight, as well as build new fishery patrol vessels.

Q: There are concerns that with Pacific bluefin tuna stocks falling due to overfishing, smaller tuna will mistakenly get caught in stationary nets and catches will exceed volume restrictions.

A: Catches are presently on pace to grow 20% from last year. No matter what, we aim to adhere to international pacts on fishing quotas. As of January 2018, we have also fully implemented Total Allowable Catch restrictions on the Pacific bluefin tuna and tightened oversight.

For fishers who have taken further steps on managing tuna resources than before -- such as suspending fishing -- we will be generous in helping compensate for corresponding losses. We aim to balance meeting international commitments with supporting livelihoods in the fishing industry.

Q: How is the capacity for growth in Japan's fishing industry?

A: Japan has some of the world's foremost fishing grounds, and the potential for growth is high. We aim to continue supporting the development of products for export, as well as helping pair businesses with manufacturers.