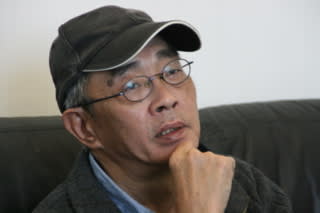 "Hong Kong's protection for the fourth estate is just incomparable with [that of] Taiwan," Lam told the Nikkei Asian Review in a recent interview, referring to the regard for the press in the two outposts of greater China.

Scheduled to open in the second half of the year, the new store has been funded by a group of pro-democracy activists from Hong Kong, who wish to remain anonymous for fear of repercussions.

"It's 90% for sure now. The only thing is to find the right people and place," said Lam, who has served as an adviser about the new venture but will not be involved in day-to-day operation of the bookstore. "It will be more like a symbol -- a symbol of resistance -- just like Causeway Bay Books has done before."

Arriving at the Nikkei office in Hong Kong, the thin, bespectacled Lam slowly removed his cap and face mask, a precautionary measure he has insisted on adopting over the past year to shield his identity from stalkers or harassers.

The 62-year-old retiree is the former manager of Causeway Bay Books, where he and four other booksellers sold books critical of Chinese leaders. He vanished mysteriously in late 2015, only to resurface on the mainland months later.

Some of the more gossipy titles they carried, especially those about the colorful private lives and power struggles of top Chinese politicians, sold briskly among mainland tourists visiting Hong Kong, the former British colony that was returned to China in 1997. The Hong Kong-based bookstore also mailed books directly to clients on the mainland.

Lam was the first of the booksellers to speak out about his unexplained disappearance. In a press conference upon his release in June 2016, he revealed how he been handcuffed and blindfolded after crossing the border to the southern Chinese city of Shenzhen to meet his girlfriend, and was later forced into detention in a small room and faced repeated interrogations by mainland security agents.

"I dared not contact my colleagues until now. This will only put them in greater danger," said Lam, referring to the other booksellers who disappeared for a period. Chinese-born British national Lee Bo was allegedly abducted by mainland agents from Hong Kong but, like his colleagues Lui Bo and Cheung Chi-ping, came under pressure to remain silent over what happened due to their family ties on the mainland.

Swedish national Gui Minhai, a major shareholder of Mighty Current, the owner of Causeway Bay Books, is the only bookseller remaining in custody. He is awaiting sentencing for drunk-driving, a crime he might not have actually committed.

The case of the missing booksellers rekindled long-standing anxiety that Hong Kong's "one country, two systems" governing principle, engineered by the late Chinese leader Deng Xiaoping before the city was handed back to Beijing, is in peril. The Basic Law, Hong Kong's constitution, guarantees freedom of speech, publication and movement in the territory, until 2047. Recently, international rights watchdog Reporters Without Borders has chosen Taiwan over Hong Kong to open its first Asia bureau, citing concerns over China's interference in the latter. According to the Paris-based organization, Hong Kong's latest ranking in terms of press freedom slid to 73th, down 55 places in 15 years, while Taiwan is ranked the freest in Asia at 45th place.

"The erosion of Hong Kong's media independence vis-a-vis Beijing is now underway," the Reporters Without Borders website says of the city, adding that the need for the media to fight against Beijing's influence is "increasingly noticeable."

The alleged abduction in late January of Chinese billionaire Xiao Jianhua and a crackdown on leaders of the 2014 "Umbrella Movement" protests, just a day after Beijing-backed bureaucrat Carrie Lam Cheng Yuet-ngor was elected as Hong Kong's leader, has only added to fears about political intervention from the mainland.

"Things will only get worse rather than better... I can see that Hong Kong is now in big trouble," Lam said. "Our only hope will lie in non-violent resistance."

Despite the setbacks, Lam predicted if no genuine attempts were made to address Hong Kong's deepening political and economic woes, the territory could be brewing a protest far bigger in scale and impact than the Umbrella Movement. "The question is just when," he added.

Born and raised in Hong Kong, Lam has been in the publication industry for two decades. For most of that time, he was involved in the once-lucrative trade in banned books that boomed after China relaxed travel restrictions to Hong Kong in 2003. Some would even smuggle books into China, but Chinese President Xi Jinping's rise to power and his bid to tighten the country's grip on free speech stifled their sales.

Tucked away in a dilapidated building behind the Sogo Japanese department store in a prime shopping hub in Hong Kong, Causeway Bay Books was one of the few remaining independent bookstores, along with a handful of others concentrated in Mongkok across the harbor. Major bookstore chains have mostly distanced themselves from the banned book trade.

Facing a dwindling market and falling sales, Lam blamed the deteriorating quality of banned titles. While earlier titles were mostly memoirs of important politicians or based on serious investigations, "a scandalous book could now be churned out three days after the 18th Party Congress[in 2012]," he said, referring to the meeting of the Chinese communist party that takes place every five years. "This is way too fast and too much."

Looking ahead, the industry would need an overhaul and a greater emphasis on quality over quantity, he said. "They can't go on selling junk."

In February, Lam was invited to attend an event in Taiwan. He was met with a heavy police guard, following pro-Beijing attacks on Hong Kong pro-democracy activists at Taipei airport earlier.

What impressed him during his visit was not just Taiwan's respect for publishers, but also the sprawling community of independent bookstores across the island. He hoped this could be an inspiration for Hong Kong.

"They can help sow the seeds of new ideas in Hong Kong, whether it can be a new philosophy of governance or independence -- what I mean is not just greater political independence but also mental independence," he said.

The bookstores scattered around local neighborhoods in Taiwan have become focal points for nurturing and spreading new ideas through cultural seminars, book clubs and screenings. Lam visited a small village where many local bookstores display banners in support of the anti-nuclear movement that is gathering steam in Taiwan.

But Taiwan is not somewhere he could call home, despite his affection for the island and frequent visits there. Last year, soon after he revealed details of his abduction, Lam was told that he could be granted political asylum in Taiwan or in the U.S., but he decided to stay in Hong Kong.

"You might choose to escape abroad, but then you are only enjoying the fruits of others," he said. "As a native Hong Konger, I would stay here to fight for democratic changes."