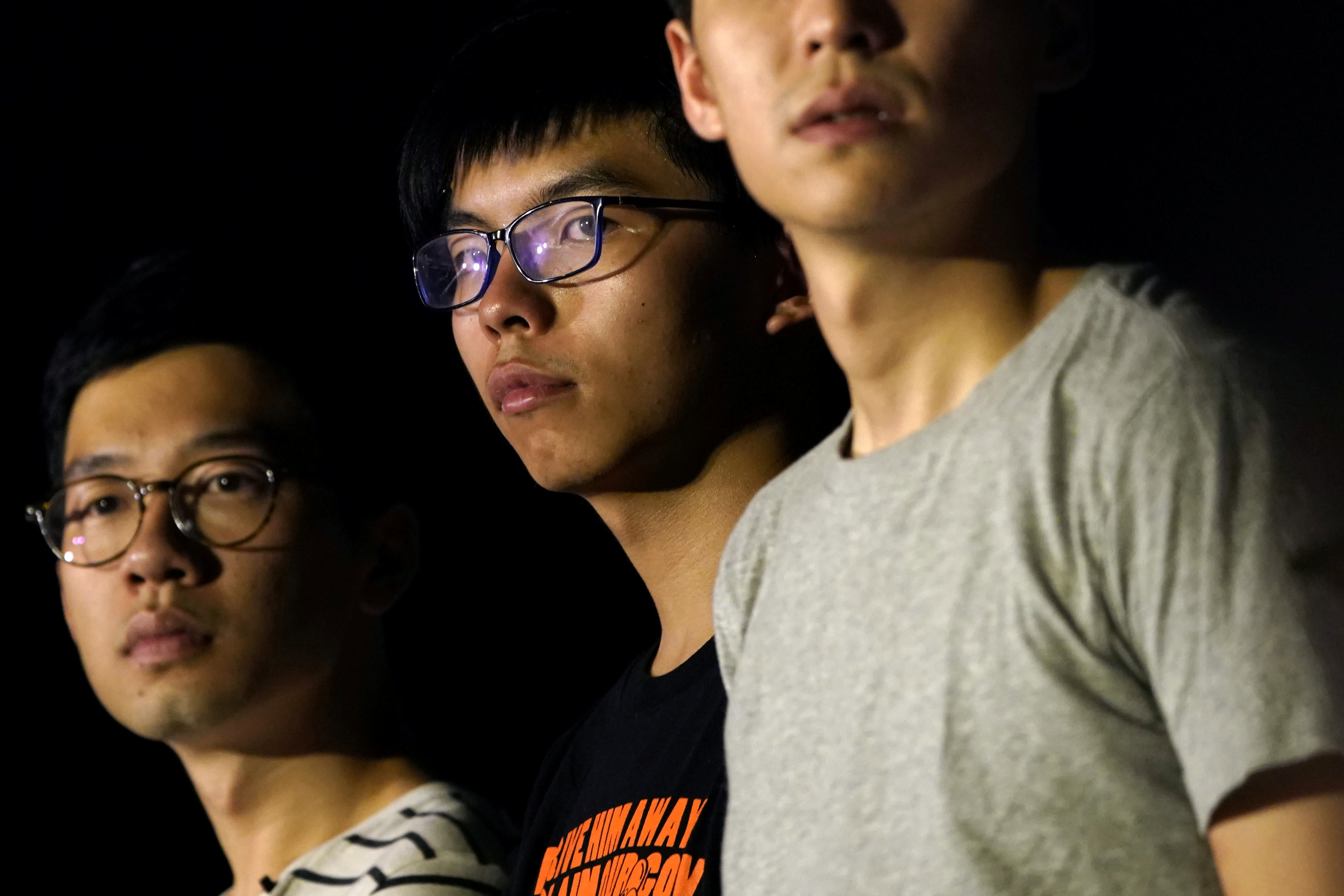 HONG KONG -- Three leaders of Hong Kong's democracy movement have been sentenced to prison in connection with massive street protests in 2014, a ruling that human rights groups call a politically motivated bid to deter further activism.

Hong Kong's Court of Appeal on Thursday rejected as too lenient the sentences issued last August related to the activists' role in the "Umbrella Movement" that paralyzed the island's central business district for months starting in September 2014. Joshua Wong, the movement's leader, and former student leaders Nathan Law and Alex Chow were taken immediately to begin serving six to eight months of jail time for crimes including unlawful assembly. These sentences disqualify them from seeking political office for five years.

A lower court had sentenced Wong and Law to 80 and 120 hours of community service, respectively, while Chow had received a three-week jail term with a one-year suspension. The trio plan to challenge the new, tougher sentences in Hong Kong's Court of Final Appeal.

Following the 2014 protests, Wong and Law formed the democracy party Demosisto, which calls for a referendum in which Hong Kongers decide what form the region's government would take after 2047. The "one country, two systems" arrangement, under which China claims ownership of Hong Kong but grants the region a high degree of autonomy, expires in that year.

Law was elected to Hong Kong's legislature last fall on the Demosisto ticket, only to be stripped of his seat for taking the oath of office in a manner inconsistent with the law. The latest ruling will keep him from running to reclaim that seat in a pending by-election, and could have a chilling effect on the democracy movement as a whole.

Human rights watchdogs are alarmed by the heavy sentences meted out to the three men.

"These proceedings had nothing to do with the rule of law," she said, "and so not only is it a sad day for these three peaceful pro-democracy activists, it's a travesty for Hong Kong and the ways in which it has long distinguished itself from the mainland."

Mabel Au, director of Amnesty International's Hong Kong operations, said in a statement that "the relentless and vindictive pursuit of student leaders using vague charges smacks of political payback by the authorities."

"The real danger to the rights of freedom of expression and peaceful assembly in Hong Kong is the authorities' continued persecution of prominent democracy activists," she added. "Prosecutions aimed at deterring participation in peaceful protests must be dropped."

In some sense, Richardson said, "these three young men's commitment, even in the face of persecution, to carry on their pro-democracy work and studies" is cause for hope and inspiration. "But the developments are no less ominous."

"Certain people in the community allege that the prosecution in this case was politically motivated, or that this case is a case of political persecution," the department noted, shrugging off such allegations as "utterly groundless and [choosing] to ignore the existence of objective evidence."

The statement cited a line from the decision that the reason for the jail sentence "is because they [the three defendants] have crossed over the boundary of the law."