In China, a Xi-Wang regime may be on the way Politburo Standing Committee member Wang Qishan, right, calls out to President Xi Jinping from behind as they leave the rostrum of the Great Hall of the People in Beijing in March 2016. (Photo by Akira Kodaka)
KATSUJI NAKAZAWA, Nikkei senior staff writerNovember 11, 2016 18:51 JST | China
CopyCopied

TOKYO -- After scoring a significant political coup two weeks ago, Chinese President Xi Jinping finds himself in better position to maintain his grip on power beyond 2017. He has figured out a way to get his right-hand man past an age-based retirement tradition.

The sixth plenary session of the 18th Central Committee of the Chinese Communist Party was held in late October. Besides being president, Xi also helms the ruling party as general secretary.

The four-day party meeting, which began on Oct. 24, made a big splash at home and abroad. It was during the meeting that it was decided Xi would be identified as the "core" of the party. That term further differentiates Xi from other leaders and raises his pedestal that much higher.

But meeting attendees also took another -- and possibly more crucial -- step. They adopted new party rules, including a provision that paves the way for a key retirement age system to be overturned at the party's next national congress, about a year from now.

Full details of the new party rules emerged this month.

The Politburo Standing Committee, the Communist Party's top decision-making body, is led by Xi. The retirement age for committee members was set at 68 at the party's 2002 national congress. But the rule is rather a long-standing custom; there is no provision regarding it.

Under the unofficial rule, all but Xi and Premier Li Keqiang of the current seven Politburo Standing Committee members are supposed to retire at the party's next national congress because they will have hit the quasi retirement age. This includes Wang Qishan, Xi's right-hand man.

"But Xi Jinping can now keep open the option of retaining Wang, his most trusted ally and China's anti-corruption czar," said a Beijing-based observer who closely follows Chinese politics.

Xi became general secretary at the Communist Party's last national congress, about four years ago. He ascended to the presidency in the spring of 2013.

The current Chinese regime is widely seen as the Xi-Wang regime, rather than the Xi-Li regime.

The bond between Xi and Wang is extremely strong. Although Li is the second-ranked member of the Politburo Standing Committee, many people see sixth-ranked Wang as China's de facto No. 2 man.

Wang was born in 1948. He will be 69 when the Communist Party's next national congress is held. If he were forced to follow the unofficial age-based retirement system, Xi's firm grip on power would suffer a serious blow.

Since coming to power, Xi has been using a sweeping anti-corruption campaign to wage a power struggle against his political foes and tighten his grip on the country.

Wang has spearheaded the anti-corruption drive as the head of the Central Commission for Discipline Inspection, the party's top anti-graft body.

"I wonder if there is anybody else who can manage the Central Commission for Discipline Inspection, a job that will earn him or her many enemies?" said one Communist Party member who has kept an eye on what goes on in Beijing's Zhongnanhai area for many years.

Expect that nerve center to age a bit. During their meeting, central committee members eased the retirement system by calling for the "resolute correction" of "biased methods" of promoting party cadres based simply on any one of four criteria -- votes won, performance, growth rate or age.

Even many Chinese have trouble understanding what this wording actually means. It is intended to make a sham of the Politburo Standing Committee's age-based retirement system.

Essentially, party cadres will no longer be promoted based simply on any one of the four criteria: the number of votes won in intra-party elections, job performance as stated in personnel records, economic growth rates in regions they are in charge of and age.

The easing of that last criteria is particularly important. Now, not even members of the powerful Politburo Standing Committee need to worry about being too old.

Wang is younger than the four other Politburo Standing Committee members who are supposed to step down at next fall's national congress under the unofficial age-based retirement system. This will make it easier for Xi to explain away why only Wang might be retained.

At Xi's behest, many party members might call for Wang to be allowed to stay on as a Politburo Standing Committee member as an exception to the unofficial retirement age system.

Their rationale would be that Wang plays an essential role in the fierce anti-corruption campaign and would be only a year older than the unofficial retirement age when the committee is reshuffled next fall.

The old rule concerning the promotion of senior party officials, which has been branded as "biased" by the newly adopted provision, was established when Hu Jintao, Xi's immediate predecessor, was in power.

The old rule can be called "the Li Yuanchao rule" as Li Yuanchao played a central role invoking it as the head of the Communist Party's Organization Department.

Li Yuanchao currently serves as China's vice president. But he is not as powerful as his title suggests. Vice president is a government post. In China, the government plays second fiddle to the Communist Party.

Li Yuanchao is still just a member of the Politburo. He missed a chance to be promoted to the Politburo Standing Committee at the party's last national congress.

The Communist Youth League is the power base of Vice President Li as well as former President Hu and Premier Li.

The Li Yuanchao rule was supposed to "visualize" and "regularize" the criteria for promoting party officials. In reality, it favored the Communist Youth League.

The Communist Youth League is luring many particularly high-performing high school and university students. Young people between the ages of 14 and 28 are eligible to join.

Backed by its organizational power, the league's members perform well in intra-party elections. In addition, the league has a huge pool of young talent and can recommend the best and brightest as candidates for party posts left vacant by retiring officials.

Meanwhile, the continued existence of the Li Yuanchao rule was highly inconvenient for Xi, who does not have any such massive organization at his back. 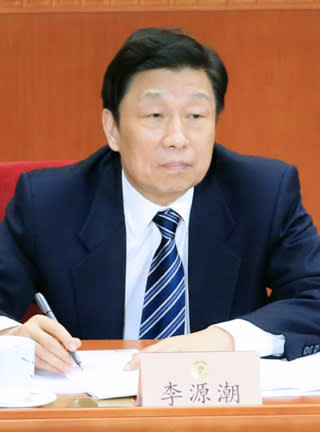 Chinese Vice President Li Yuanchao is seen at the Great Hall of the People in Beijing in March 2016. (Photo by Akira Kodaka)

The Li Yuanchao rule had posed a major career obstacle to close aides and other members of Xi's Zhejiang faction who do not necessarily have a good track record.

The faction comprises Xi's former subordinates in Zhejiang Province. Xi became a top Chinese provincial official for the first time in Zhejiang. He regards the province as his second "hometown."

Xi belongs to the so-called second red generation, a group of children of revolutionary-era party leaders. The continued existence of the Li Yuanchao rule would also have made it difficult for Xi to promote fellow members of the second red generation to key party posts.

Xi is 63. Members of the second red generation around Xi are mostly 60 or older, including Wang, whose wife is the daughter of Yao Yilin, a former member of the Politburo Standing Committee and former vice premier.

Despite being granted his wish regarding the age-based retirement rule, Xi still faces a bumpy road to retaining Wang as a Politburo Standing Committee member beyond 2017.

The biggest question is how to contain an anticipated backlash from former President Jiang's faction and the Communist Youth League faction.

Xi and Wang have been friends for decades. During the 1966-1976 Cultural Revolution, "intellectual youths" in urban areas were sent to live and work in rural areas under the "Up to the Mountains and Down to the Countryside Movement." When Xi was 15, he was sent from Beijing to live a "sent down" life in a remote farming village near Yan'an, a city in Shaanxi Province. Wang's sent-down years were spent nearby. The two met during those days, and decades later Xi continues to adore Wang.

In a scene illustrating their unusually close relationship, Wang called out to Xi from behind and patted the president's back as the two left the opening ceremony for the Chinese People's Political Consultative Conference's annual meeting this past March.

It is still uncertain, however, whether Wang will easily agree to stay on as a Politburo Standing Committee member, even if Xi strongly requests that he do so.

As China's anti-corruption czar, Wang has acted cruelly, alienating many within the Communist Party.

Were he to indeed become the first to break through the Politburo Standing Committee's unofficial retirement age barrier, in later years he would always have to look over his shoulder. An assassination attempt would not be out of the realm of possible risks.

If Wang does retain his Politburo Standing Committee membership, there would inevitably be a chorus of objections from within the Communist Party, especially from Jiang's faction. The faction has many senior members that it would likely want to keep on the job in a bid to maintain its political influence.

Some party members, however, are reading the tea leaves differently. They suggest Xi is bending the retirement rule -- and keeping the option of retaining Wang beyond next year -- simply in an attempt to avoid becoming a lame duck.

What Xi is actually up to is a guessing game -- one that will only intensify leading up to next year's national congress.