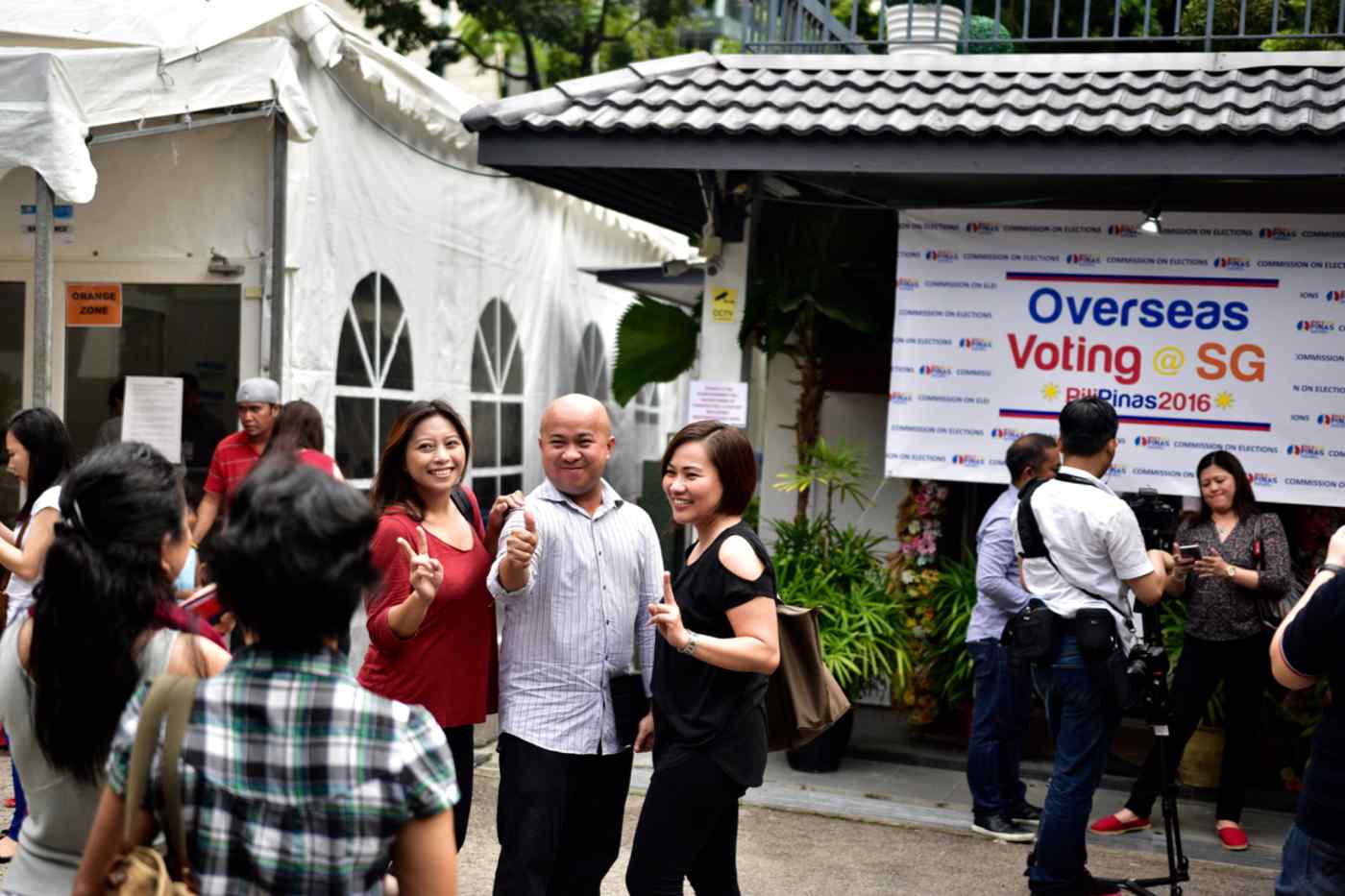 SINGAPORE -- Perched at the cashier's desk in MJ's Pinoy Shop in Singapore's Lucky Plaza, Janice Estrera's mind drifts back to her three children at home on Cebu island in the central Philippines, where they live with their grandparents.

"I would really like to go back, it is suffering to be outside [the country]," the 34-year-old business graduate lamented. 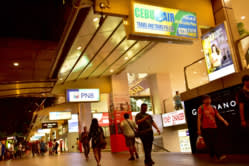 Lucky Plaza mall in Singapore, site of dozens of Filipinos shops and business and a hub for Filipino expatriate life in the city state. (Photo: Simon Roughneen)

Estrera is part of the estimated 180,000-strong Filipino community in Singapore, just one of the many sizeable overseas communities of expatriates who left the Philippines to work and send remittances to family members at home.

In Singapore, 83,276 Filipinos are registered to vote in the May 9 national elections, in which up to 55 million voters will elect a president, vice-president and local and national lawmakers.

"We have set up air-conditioned tentages to accommodate our voters. We also provided a postal ballot system to encourage voters who are not able to go out to mail in their ballots," said Victorio Mario M. Dimagiba Jr., minister and consul general at the Philippine embassy in Singapore.

Of the estimated 10 million Filipinos living overseas, 1.3 million are registered to vote at selected embassies or by post.

Absentee voting began on April 9, and for Estrera, the choice is clear. "My president is Duterte," she said, referring to Rodrigo Duterte, the 70-year-old mayor of Davao on the southern island of Mindanao and frontrunner in the campaign.

Despite Duterte's often crude language and penchant for controversy -- including a recent speech in which he joked about the rape and murder of an Australian woman missionary in Davao nearly 30 years ago -- Estrera and many other Filipinos voting abroad see him as just the kind of uncompromising maverick needed to curb corruption and crime.

"It needs to change, the same as Davao, crime free, no corruption," said Norelyn Lopez, a domestic helper in Singapore who has lived for four years in the city-state.

"There is a big difference between Davao and Manila these days," she said, explaining that under Duterte's hardline stance against criminals, Davao has become a much cleaner, safer city than the greater Manila region. These changes matter much more to voters than Duterte's often obscene outbursts, she added.

Speaking at the Philippine embassy in Singapore where he had just voted, Denver Jay Mauricio, a 32-year-old IT professional who moved with his wife to Singapore from Davao five years ago, said he had voted for Duterte. "It is because of his charisma and because of how he leads people," said Mauricio, who sends 70% of his salary home each month to support his parents and help with education fees for his siblings. "I had a similar job in the Philippines, but here the salary is around five times more," he added. 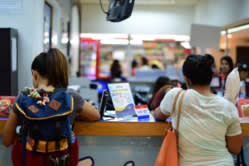 Women sending remittances back to the Philippines from a remittance counter inside Lucky Plaza. (Photo: Simon Roughneen)

The remittances, amounting to billions of dollars sent by millions of Filipinos working overseas, help support an economy that was once frequently described as "the sick man of Asia."

But the Philippines has shed that image in recent years, with the economy growing more than 6% a year on average since 2012. The remittances have helped fuel spending on consumer goods at home, "a central driver of the economy," according to the Asian Development Bank. Remittances have amounted to around $20-$25 billion a year since President Benigno Aquino III was elected in 2010, according to central bank statistics.

But economic growth under Aquino does not look like it will help his preferred successor, Manuel Roxas, win the presidency on May 9. Many Filipinos complain that they have not benefitted from the economic growth. "For [Aquino's] six years, we cannot see changes," said Estera.

"The economy is OK, but maybe only for those in Manila," said Maria Teresa, manager of The Filipino Shop in Bangkok. "But in the provinces we cannot feel it," she added, referring to home province of Batangas, south of Manila. At work inside the New Mabuhay Restaurant, a meeting point for Filipinos in Bangkok. (Photo: Simon Roughneen)

Medy David, 43, who has lived in Malaysia for nearly 20 years, also supports Duterte. Married to a Malaysian and with a 12-year-old daughter, David said that she would not consider moving back to the Philippines unless the country's road and power infrastructure is upgraded to match that of Malaysia.

Referring to a recent power outage that saw Manila's main international airport closed for several hours, David said "the airport is the worst in the region. We need someone strong to make the right changes."

Pedro Jose F. Bernardo, a Yangon-based attorney, praised the work that Aquino has done in turning around the Philippines' laggard economy, but he acknowledged that the economic benefits have not been felt by poorer Filipinos.

"It will take really some time before it trickles down," Bernardo said. He added that even if the Philippines continues to grow strongly, it is unlikely to reverse the country's brain drain soon.

"We will have a diaspora people for the next generation," said Bernardo, one of 11 Filipino lawyers who works for Kelvin Chia, a Singapore law firm in Yangon, and among the 416 Filipinos registered to vote in Myanmar.

Regardless of who wins the election and how well the country's economy continues to fare, Juan Villena, 29, an accountant who moved to Kuala Lumpur six months ago, thinks it is unlikely he would move home in the next five years. His higher salary in Malaysia means he can send more money back to his family after he was head-hunted to come to Kuala Lumpur.

Vincent Vergara, an engineer working in Singapore, said that higher growth in the Philippines left him hopeful that he would later return home. "We don't want to lose hope, we definitely want to go back. There is a lot of upside in the Philippines now, we want that fulfilled," he said.