Rakhine Buddhists, displaced from Maungdaw and sheltering in a monastery in Sittwe, the capital of Rakhine State, Myanmar, are registered to be moved to a provisional shelter in the outskirts of the town, Oct. 18. (Photo by Carlos Sardina Galache)
CARLOS SARDINA GALACHE, Contributing writerNovember 23, 2016 20:48 JST | ASEAN
CopyCopied

SITTWE, Myanmar -- In mid-October, Maung Hla Tun, a 45-year-old Buddhist, fled his village in the remote district of Maungdaw, in Myanmar's western Rakhine State, after it became a virtual war zone. Six days earlier, more than 250 people armed with knives, spikes and old guns had launched coordinated attacks against the Border Police Guard in the area, and a joint force of soldiers and police responded by launching a sweeping search for armed militants. 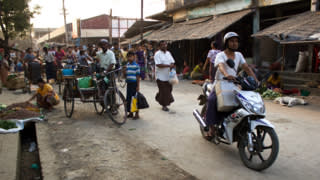 In all likelihood, the attacks were carried out by militants from Rakhine State's mostly stateless Muslim minority, known as the Rohingya. In the aftermath, three districts in the north of the state were declared a "military operations area," and the security forces launched the still ongoing "Operation Backdoor" to hunt down suspected attackers. According to the army, 102 Rohingya militants and 32 members of the security forces have since been killed, and tens of thousands of people have fled their homes. Human rights groups say the death toll is much higher.