India charts its own path to economic prosperity

Companies aim to fuse IT with manufacturing to become world-beaters MUMBAI/NEW DELHI -- A smartphone shop in Mumbai, India's commercial center, displays an array of phones made by Indian manufacturers, as well as locally made products with Chinese brands. A sales clerk proudly called them domestic rather than Chinese.

Sales of smartphones in India exceeded 100 million units in 2016 for the second year in a row, according to data released by U.S. research specialist IDC in mid-February.

While the market used to consist mainly of finished smartphones imported from abroad, over the past year or two, the share of handsets assembled in India has grown to more than 60%, helped by high tariffs imposed by the government of Prime Minister Narendra Modi. The policy has encouraged foreign smartphone makers, such as Hon Hai Precision Industry of Taiwan, to set up manufacturing operations in India.

Plans in the making

Smartphones are just the beginning. India will push ahead with economic reforms and promote investment to lift growth, Finance Minister Arun Jaitley said in February as he announced the national budget for the fiscal year through March 2018. The government, which has eased restrictions on foreign investment in the defense and insurance industries, looks likely to liberalize further, following a big win by Modi's Bharatiya Janata Party in local election results tallied Saturday. 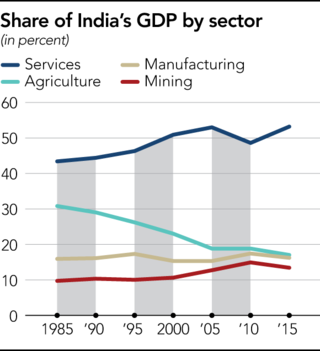 Foreign direct investment in India rose 23% in fiscal 2015 from the previous year to an all-time high of $55.4 billion, and is expected to set a new high in fiscal 2016.

Last year, the Ministry of Commerce and Industry said India would reach Modi's target of putting the country in the top 50 of the World Bank's ease of doing business ranking within three years. The target is aimed at accelerating the liberalization of the Indian economy, helping it catch up with China and Southeast Asia.

That will be a tall order. India currently ranks 130th out of 190 economies in the survey, prompting Commerce and Industry Minister Nirmala Sitharaman to play down the target and scrap the three-year time limit.

China and Southeast Asia have achieved high growth by inviting in multinational companies to jump-start export industries. In contrast, the Indian economy grew nearly 10% in the second half of the 2000s, led by higher domestic demand and the development of globally competitive domestic industries in information technology, pharmaceuticals and other fields.

But India, which touts itself as the largest democracy in the world, has a highly decentralized government. Potential foreign investors must deal with regulatory inconsistencies, difficulties acquiring land and a complicated tax system.

Raghuram Rajan, a well-known Indian economist and former head of the central bank has said the world cannot "accommodate another export-led China." Rajan rejects the growth model followed by China and other countries, stressing that India needs to develop its own approach.

Recently, India's gross domestic product growth has held steady at around 7% a year. Meanwhile, the overseas operations of Indian companies, including those of its biggest conglomerate, Tata Group, have stalled.

Domestic demand and IT hold the key to India's next phase of growth. Attention is increasingly centered on the internet of things -- a network of web-enabled devices -- as a way to use the country's IT skills to strengthen manufacturing. The country's growing population represents vast real and potential demand.

A farmer in the western state of Maharashtra was surprised to learn about the cutting-edge features of his new tractor. Designed for rice farmers with seven to eight workers, the tractor has a sensor that automatically diagnoses mechanical problems and sends the data to the manufacturer so that it can be promptly repaired. The tractor has helped the farmer boost his yield, he said.

Japanese farm equipment makers such as Kubota have long had such advanced technology. But the Maharashtra farmer's machine was manufactured by a big Indian conglomerate, Mahindra Group.

Anand Mahindra, chairman of the group, whose businesses include IT as well as farm machinery, sees both as key to the future. The internet of things allows Indian companies to take advantage of their strengths, he said.