Fredy Wowor, an academic and Minahasa community leader, left, performs at a parade at the fifth congress of the Indigenous Peoples’ Alliance of the Archipelago. (Photo by Peter Guest)
PETER GUEST, Contributing writerMarch 20, 2017 16:10 JST | Indonesia
CopyCopied

TANGUNG GUSTA, Indonesia -- The image of Indonesian President Joko Widodo still gazes out from billboards along the dirt road that leads from the North Sumatran capital of Medan to Tanjung Gusta. On a recent weekend the town -- a scrappy suburb to the west of the city -- took on the air of an unusual rock festival, with thudding music, craft stalls and food carts, as thousands of representatives gathered for the quinquennial congress of the Indigenous People's Alliance of the Archipelago, which is known by its Bahasa Indonesian acronym, Aman.

The president was supposed to be the guest of honor at the gathering, but he cancelled at the last minute, choosing instead to travel to West Kalimantan to open a new border post. He sent his environment minister and chief of staff but his absence was taken as a snub by many delegates, who were mulling over whether to endorse "Jokowi," as he is known, for a second presidential term.

"If I was a president who had promised so much, and delivered so little, I wouldn't come," said Abdon Nababan, who just retired as Aman's secretary general after leading the organization for 18 years.

Many indigenous activists campaigned for Widodo in the last election, hoping he would, as he promised, pass a law recognizing their customary land rights. After coming to power in 2014, his government committed to transfer nearly 13 million hectares of state-owned land to indigenous communities. Two years on, only a fraction of that has been handed over.

Indigenous groups, who have often come into conflict with the agribusiness and mining industries in Indonesia, see the recognition of customary land rights as the first and most important step in overcoming their economic, social and political marginalization for more than 70 years since Indonesian independence.

"It was the first time [the return of customary land rights] became a national political issue," Nabadan said. "And we were positive about [Widodo's] profile."

As a relative outsider, with few links to big business, the election of Widodo was seen by many as an opportunity to curb Indonesia's entrenched corruption and rent-seeking, which has fueled land grabbing and rights abuses. The promises made on the campaign trail were "revolutionary," Nabadan said. But as president, Widodo has been a disappointment to many indigenous voters.

"He made small, small changes here and there, but that progress is too small, compared to his commitment," Nabadan said. "But the problems of indigenous peoples are not small problems. They are the accumulated problems of more than 70 years." Gunarti, an activist and indigenous community leader from Central Java, has fought for more than a decade to preserve her hereditary lands from the construction of a cement plant and quarry. (Photo by Peter Guest)

Those problems are shared by indigenous communities across the archipelago. While Gunarti, a leader from the Sedulur Sikes community in central Java, was attending the congress in Tanjung Gusta, her colleagues were protesting in Jakarta with their feet fixed in boxes of cement to campaign against the construction of a cement plant and mine on their land. It is the latest skirmish in a decade-long battle against a development that threatens their home near Mount Kandung.

Gunarti believes that quarrying on the mountain would compromise hundreds of streams that feed the farms below. "Without the mountain, there is no source of livelihood," she said.

They have resisted the development through a combination of non-violent protests, education and legal challenges. To counter claims by the company that the factory would provide jobs and social infrastructure, Gunarti and her colleagues went to another town, Tuban, to make a documentary film that showed the reality of living next to a cement factory. When the company's environmental impact study showed only six active water springs on Kandung, the community conducted its own research and found 49.

In land rights cases, maps and environmental studies are heavily politicized and indigenous groups have had to learn to gather evidence to challenge the legality of concessions and dispute the results of contentious surveys. Many indigenous activists now employ camera drones and compile satellite imagery. They are assisted by international foundations and non-governmental organizations, which see their cause as not only upholding human rights, but as an effective bulwark against deforestation that contributes to global warming.

A November 2016 analysis by research groups the World Resources Institute, the Woods Hole Research Center and the Rights and Resources Initiative estimated that more than a quarter of all carbon sequestered in tropical forests is on indigenous and community forestlands.

The fight for land rights is not just about culture and heritage. Customary land use, such as hunting and forest agriculture, provide livelihoods that are difficult to replace with employment on plantations or mines. "We are laborers on the land we used to own" is a common refrain among indigenous activists.

Gunarti said the mountain is her "heritage" and explained how the community's religion, Samin, dictates that they must make a living from the land. But she also offered a practical argument: "They talk about providing employment. We do two seasons of planting per year. One hectare of rice field can employ 240 people per season," she said. "They're going to take away 2,000 hectares. If it's lost, how many people will lose their jobs?"

Such conflicts raise important questions about how compatible Indonesia's development model is with conservation and the rights of indigenous communities; and how to balance the demands of an economy driven by the commodity and agribusiness sectors with the needs of a significant part of the country's population who view the world very differently.

"The impact of modernity is to alienate us from the land," said Fredy Wowor, a Minahasa leader from North Sulawesi, who divides his time between his community and his job as a lecturer in non-Asian literature at Sam Ratulangi University in the regional capital, Manado. He said that the government and society at large should see indigenous communities as exemplars of sustainable livelihoods, and integrate their cultures and respect for the land into the national education system.

Widodo's stand-ins at the Aman conference -- his chief of staff, Teten Masduki, and Nurbaya Bakar, the minister of environment and forestry -- received a cool reception from the delegates. Bakar's promise that "you can trust us to fight your struggle" was met with only a smattering of half-hearted applause. 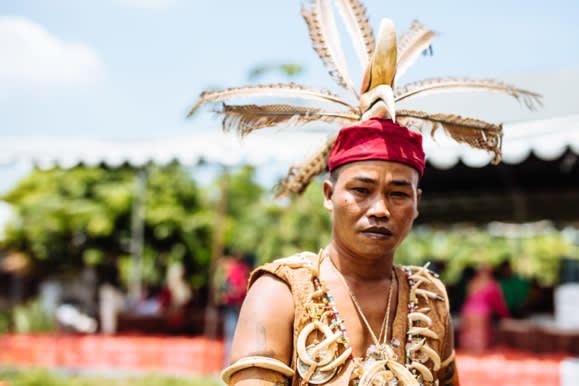 Kinarang Boy, from the Dayak Balanagan Halong community, South Kalimantan, says that his community expects support from the Widodo government, but their trust is not absolute. (Photo by Peter Guest)

Among conference participants was Kinarang Boy, from the Dayak Balangan Halong community in South Kalimantan, whose full ceremonial outfit meant he was in constant demand for selfies from other delegates. He told the Nikkei Asian Review that neighboring communities have been squeezed by palm oil plantations, and people had been "criminalized" for trying to make use of their hereditary land. "We don't trust the government 100%, but we expect they'll listen to us," he said.

Hat Dea Heline, from the Dayak Wehea ti Futuai Timur community in East Kalimantan, said the government needed to move faster to prevent plantations further encroaching on his community. Lauronsius Madus from Mopi Tana on Flores Island expressed doubt that the national government's promises would make any difference to the way that local governments operate. "In the local level, the political willingness of the government and parliament is very weak. They don't take our side," he said.

The delegations from West Papua were the most critical. The region, which has long campaigned for independence, is culturally distinct from the rest of the archipelago. Papua is increasingly under pressure from domestic and international companies that are able to grab land with relative impunity because of weak government oversight.

Daniel Toto, who represents nine indigenous communities from the Jayapura district of Papua, said that many of the government's efforts were token gestures. On March 9, officials from West Papua handed back more than 3,500 hectares of rainforest reserve in the Knasaimos indigenous territory, the first time that the regional government has given legal title to the local communities.

That move, noted Toto, demonstrated the government was only willing to give up land that is already protected by conservation laws, while keeping control of land that had economic value. He repeated a motto that Yosafat Merabano, a veteran community leader from the same region, wants Aman to adopt as its slogan: "If the state will not recognize indigenous people, we will not recognize the state."

Speaking at an impromptu press conference under a tree in Tanjung Gusta, presidential chief of staff Masduki said that the schedule for handing over large areas of land and creating legislation recognizing indigenous rights had been "too ambitious," since it was proving challenging to work with local governments and within the constraints of the national parliament. Daniel Toto, a representative of nine indigenous communities from Papua, believes that the Indonesian government’s concessions to indigenous rights have been token gestures. (Photo by Peter Guest)

But the indigenous groups are running out of patience. They are now faced with a difficult choice -- either to support a government that has failed to deliver on its promises or to withdraw their support and risk a worse one coming to power.

Aleta Baun, a leading indigenous rights activist who successfully defended her traditional lands in Timor from mining operations, warned that the progress the movement has made is still very fragile. "We hope Jokowi will win," she said, "or else we will go back to the old times."

Widodo may need their support and could come to regret his decision to avoid the congress. Indonesia's politics is becoming increasingly nationalist in tone -- as exemplified by the current election for mayor of Jakarta, which has descended into ethnic and religious factionalism.

Aman has an enviable grassroots network across Indonesia and its constituent indigenous associations represent 20 million people. Unlike the state, it is visible in the villages. "We are well organized, we have resources, we could do advocacy. We could be [Widodo's] friend," Nabadan said. "We know the whole structure of the government is the old one. We know that government has been corrupted for more than 50 years. But we wanted to hear it directly from the president."