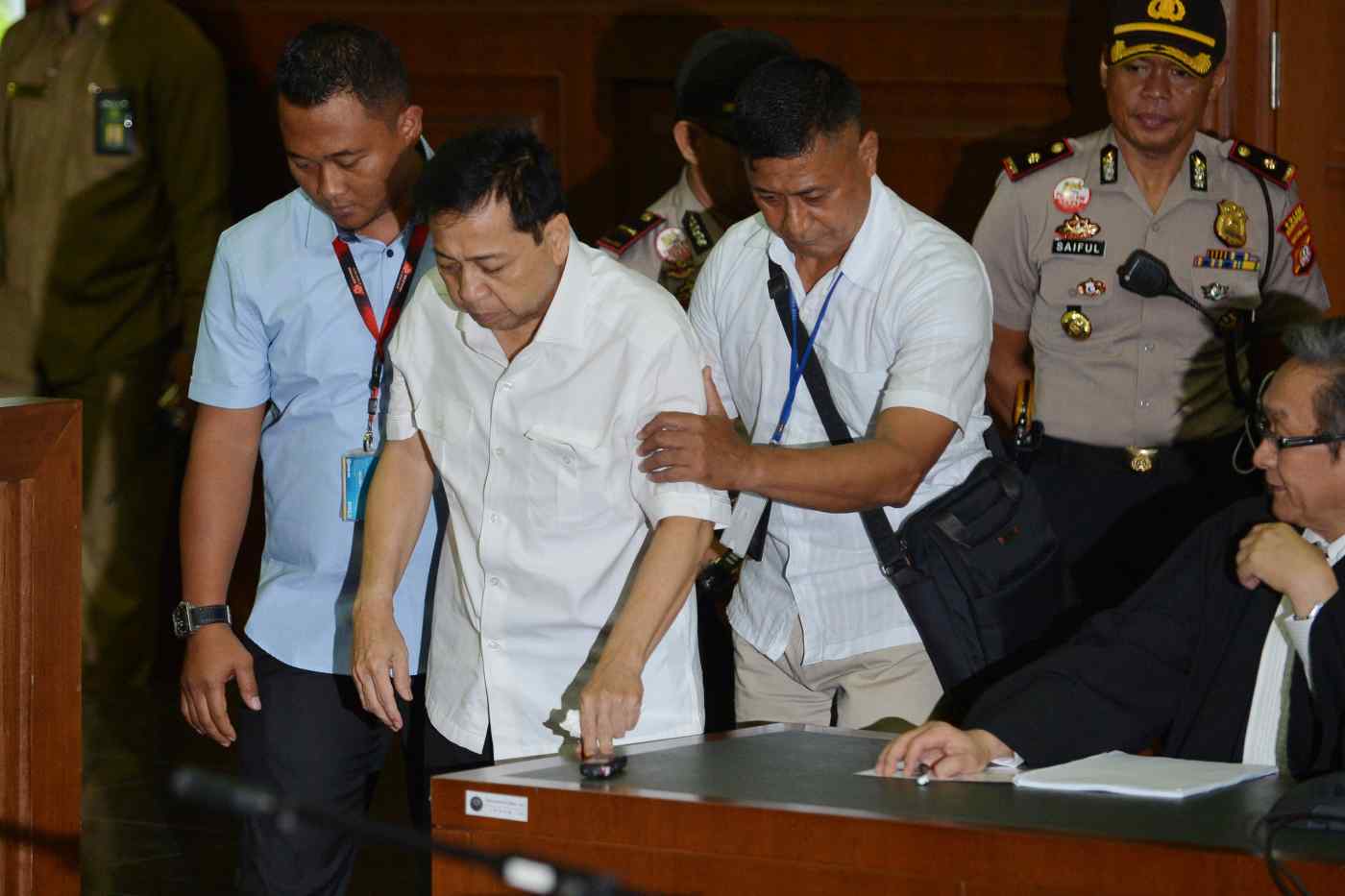 JAKARTA -- Indonesia's second largest political party has replaced its chairman, former Speaker of the House Setya Novanto, after prosecutors on Wednesday indicted him for corruption, and named Airlangga Hartarto his successor.

A Golkar Party meeting in Jakarta agreed around midnight on Wednesday that Hartarto, a senior Golkar politican who is the industry minister in President Joko Widodo's cabinet, will take over chairmanship of the party. He will be inaugurated as the new party chairman next week. Golkar had stood firm behind Novanto since Indonesia's corruption agency first named him as a suspect in July in a massive graft case over the 5.84 trillion rupiah (or $430 million at current exchange rate) procurement of electronic identity cards -- or e-KTP -- in 2011-12. As many as 2.3 trillion rupiah of that amount is believed to have been embezzled and distributed among some 100 people, half of whom were members of parliament and many still serving.

Golkar had remained loyal to Novanto even though observers were worried that support for the party would be eroded ahead of next year's local elections and the 2019 legislative vote. Novanto evaded arrest by being hospitalized twice, and filing two pretrial motions to challenge the agency's charges -- one of which he won and resulted in the annulment of his status as a suspect before the agency again reinstated it last month.

Golkar's stance finally changed on Wednesday, as prosecutors managed to bring Novanto in front of the judges at the Jakarta Anti-Corruption Court, where he stood trial for the first time. Novanto was indicted for allegedly receiving $7.3 million in kickbacks from the e-KTP procurement while serving as the head of the Golkar Party caucus in the House of Representatives.

Novanto did not disappoint in creating another drama during Wednesday's hearing, which started at 10 a.m. but only finished late in the evening. He refused to respond to judges' queries, remaining silent the whole time -- claiming illness from diarrhea. This caused the hearing to be adjourned twice before three doctors were summoned to examine him. They declared him healthy and fit for the hearing; only after that did it resume with prosecutors reading out their indictment.

KPK Deputy Chief Saut Situmorang said because Novanto refused to cooperate with the investigation and during the trial, he may face a more serious sentence. "The threat is life sentence, or ... 20 years in prison," Situmorang said, according to Indonesian daily Tempo.

Under Indonesian law, the indictment automatically annulled the second pretrial motion that Novanto had filed to another court and the verdict was read out on Thursday.

Following his detention since last month, Novanto finally resigned from his position as the Speaker of the House earlier this week. He was elected to the position in October 2014, when Golkar was still a leading member of the opposition bloc, which then controlled parliament. Only after he won the Golkar leadership in May 2016 that Golkar switched sides to join the ruling coalition which subsequently became the majority in parliament. He also said then that he would support President Joko Widodo's bid for re-election in 2019.

The charges against Novanto had earlier raised concerns over Golkar's support for Widodo. But Hartarto's close relationship with the president on account of his position in the cabinet may mean support for Widodo remains solid. By Widodo's informal rules, though, a member of the cabinet must normally quit their position to serve as party chairman.