"My colleague suddenly passed away three months ago with colorectal cancer," she said. "I felt so sorry for him and his mother, whom he had been taking care of. But fortunately the life insurance scheme that he was enrolled in left 100 million dong ($4,390) for her -- enough for her to start her own small business to make ends meet."

Trinh is now preparing the documents to buy both health and life insurance for herself. "If something happens to me, I can leave money behind for my elderly parents. If nothing happens," she said with a smile, "then it's the same as saving up for the future."

Cases such as Trinh's are no longer a rarity in Asia, where the insurance industry has grown rapidly in the past few years. In Indonesia, Thailand, the Philippines, Vietnam and Malaysia, the market as measured by gross written premiums grew a combined 41.9% between 2010 and 2015 to $59.5 billion, according to reinsurance company Swiss Re.

The trend is expected to continue. Boston Consulting Group estimates the compound annual growth rate of the life insurance market in emerging Southeast Asian countries to be around 8% to 13% through 2020. It projects a 7% to 11% growth rate for the nonlife segment.

The industry's rise has implications far beyond helping individuals. Even the United Nations considers insurance a key ingredient for a country's economic growth. As far back as 1964, a U.N. Conference on Trade and Development report stated that "a sound national insurance and reinsurance market is an essential characteristic of economic growth." Streets in Phnom Penh, as in many other Asian cities, are congested with motorbikes, tuk-tuk and cars. (Photo by Ken Kobayashi)

CASH STASH In a region as diverse as Asia, each country has distinctive features driving the growth of the insurance sector, but there are a few common themes.

The number of people who sign up to insurance programs tends to rise in tandem with a nation's economic growth. Rising household incomes allow people to put aside money for the future, some of which goes into insurance. Households also become more likely to buy expensive items, such as cars, on which they take out nonlife policies.

Social changes linked to economic growth affect the life insurance sector, too. A report by PwC, the accounting firm, points out that urbanization is "likely to increase purchases of life, annuities and pensions products as people migrating into cities have to make individual provision for the future rather than relying on extended family support." Moreover, in a region where the 1997 financial crisis has left a legacy of distrust toward banks, insurance is seen as an investment vehicle rather than just protection for a rainy day. Products combining insurance with investment are gaining popularity in Southeast Asian countries such as Indonesia, for example, even though some offer lower returns than bank deposits. They offer wary savers an alternative place to stow away their cash.

PRICED OUT The industry argues that it can help address the region's chronic social and economic problems. "In many of our countries, public systems of social protection are underdeveloped," said Michael F. Rellosa, chairman of the ASEAN Insurance Council, at an industry gathering in Indonesia last November. "Insurance can complement basic safety nets in health care, post-retirement income or even disaster recovery planning."

In Cambodia, state social security programs often fail those in need. Public hospitals, in principle, provide low-income patients with free medical treatment. However, food, certain specialist medicines and travel -- the better public hospitals are in the capital, Phnom Penh -- are not covered. "We had to move to the public hospital because the private one was just too expensive," said Sarath, whose familiy makes a living delivering vegetables to restaurants in the capital. Sarath, who gave only her first name, explained that her son-in-law had been seriously injured when his motorbike crashed with a tuk-tuk taxi. The private hospital to which he was initially admitted cost $120 a night, including ambulance fees. Cambodia's nominal monthly wage was 642,000 riel ($160) in 2014.

Since the family is not defined as "poor," the public hospital is charging $10 a night. Expenses have piled up to $2,000 in the three weeks since the accident. "We've used up all the money we had been saving for emergencies," said Sarath, 52, with no idea how much longer the treatment could take. "[Insurance] might have helped."

On a macroeconomic level, insurance companies have the potential to help tackle one of Asia's most pressing problems: a lack of infrastructure.

The Asian Development Bank estimates that, to maintain economic growth levels, the region needs investment of $26 trillion in big projects by 2030. With its long-term financing power, the sector could act as an important source of funding -- especially where, as Bambang Brodjonegoro, Indonesia's national development planning minister, said at last year's ASEAN insurance conference, "fiscal constraint leaves the government with little room for public investment." But, with troubled and delayed projects scattered across the region, the industry is wary. 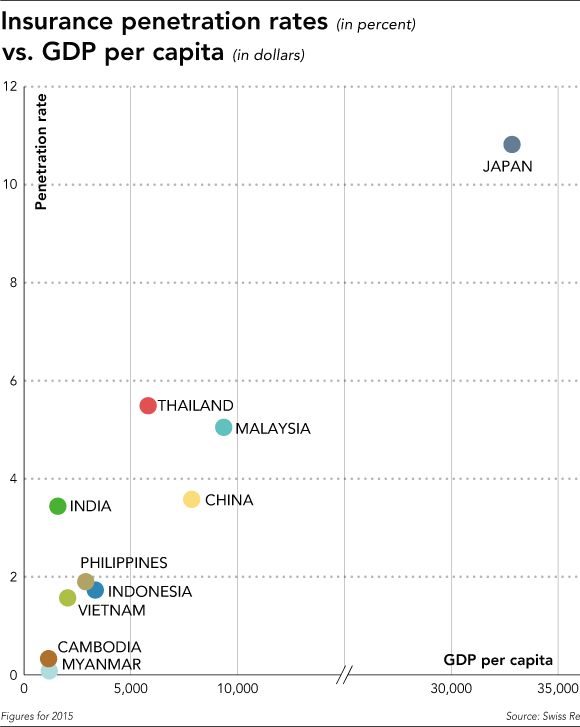 PROBLEMS SURFACE In China, the region's fastest-growing market, problems caused by the rapid expansion of the market are starting to surface. Following a relaxation of rules about the guaranteed rates they can offer on life insurance policies, insurers -- especially newer ones -- have tried to lure customers with the promise of generous returns through investment-linked policies. The easing of investment rules has also encouraged ambitious companies to pursue riskier assets.

With the premiums collected on high-yield policies sold by its affiliate, Foresea Life Insurance, private conglomerate Baoneng Group staged a hostile takeover bid for China Vanke, the country's leading property company, by snapping up shares worth billions of dollars. Yao Zhenhua, China's fourth-richest man and the chairman of Baoneng Group -- labeled a "barbarian" by Vanke's chairman -- was in February banned for 10 years from the insurance sector.

Anbang Insurance Group, too, has used sales of investment-style policies to fund outbound investments. The premiums collected by the Beijing-based business have doubled to 114.19 billion yuan in the past two years. Among the many trophy assets the group has bought is New York's Waldorf Astoria hotel. It was rumored to be negotiating a purchase of a $400 million stake in a Fifth Avenue skyscraper with a company owned by the family of U.S. President Donald Trump's son-in-law, Jared Kushner, though Anbang has denied this.

Analysts say that a mismatch between short-dated maturities on their policies and a range of long-term, illiquid investments could pose a threat to the stability of insurers. The China Insurance Regulatory Commission stepped in last year, proposing to tighten regulation of new entrants and product offerings. 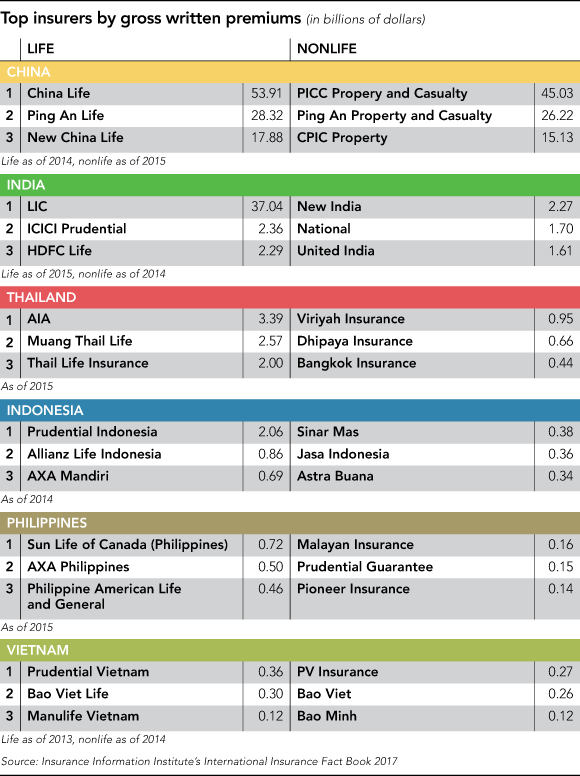 LOW TECH Despite its recent expansion, the Asian insurance sector remains comparatively underdeveloped. The combined market size of Indonesia, Thailand, the Philippines, Vietnam and Malaysia in 2015 was only 13% of Japan's and 4.5% of America's in terms of gross written premiums. The so-called penetration rate for life and nonlife insurance combined stands at about 1% to 5.5% for these five nations, as opposed to about 11% for Japan and 7% for the U.S. Penetration rates are calculated as the total value of insurance premiums as a proportion of GDP.

An optimistic view -- one taken by many in the industry -- is that this gap represents an opportunity. International insurers such as AXA, Prudential, Allianz and Manulife are building strong footholds in the region, with Japanese insurers like Dai-ichi Life Insurance and Nippon Life Insurance biting at their heels.

Governments are loath to let insurers' ambitions go unfulfilled. In Myanmar, for example, where the state-run insurer long enjoyed a monopoly, the industry has been opened up to domestic businesses, with 12 new companies licensed in 2012. For foreign rivals, access is limited but the government is contemplating further liberalization this year.

The spread of digital access helps. "Utilizing digital technology to sell insurance products is a topic that insurers in this region are working on," said Yasushi Sasaki, a partner at Boston Consulting Group. China leads the trend, with around 330 million people buying insurance products online, according to a 2016 report by Ant Financial Services Group, an affiliate of Chinese internet giant Alibaba Group Holding. 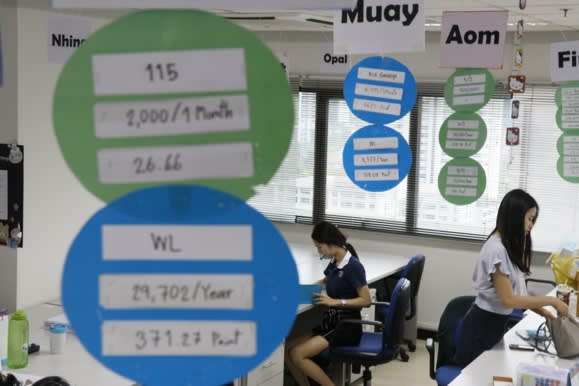 Meanwhile, Bangkok Life Assurance, a leading Thai life insurer partly owned by Japan's Nippon Life, is going old school in pursuit of business. It has employed 40 sales representatives who visit designated offices around the capital, building trust by holding seminars and distributing leaflets printed with their contact details -- just how Japanese insurers have been cultivating customers for years. Each representative's sales are represented by paper ornaments back at the Bangkok Life offices. In 2016, policies sold by the team increased 80% year on year.

Yet the sector is still grappling with long-lasting reputation problems. In the Philippines, the "pre-need" industry -- which covers things like future education and funeral needs -- nearly collapsed in 2005 after many insurers sank into financial trouble. Many parents were left without funding for their children's education, leaving a stain on the credibility of the country's insurance sector.

And, for many consumers, the problems of dealing with the industry are the same as ever. Reports of difficulty securing payouts are widespread. "It is easy to give the insurers money," said Thuy Chau, a financial adviser in Ho Chi Minh City who needed a payout to treat a liver problem. "But it is very difficult to get it out." Her request was rejected by her insurer, which said she was too new to the program.

Despite its shortfalls, there is no denying that insurance enables risks to be minimized and managed, thus driving a country forward. "By having insurance, one can take the next risk, which turns the economic wheels [of a country]," said BCG's Sasaki. "It's true that the presence of the insurance sector is increasing, and I think Asian countries are entering a virtuous circle whereby the sector helps economic activities in those countries."

Update: The chart "Top insurers by gross written premiums" has been updated to include the latest available figures.