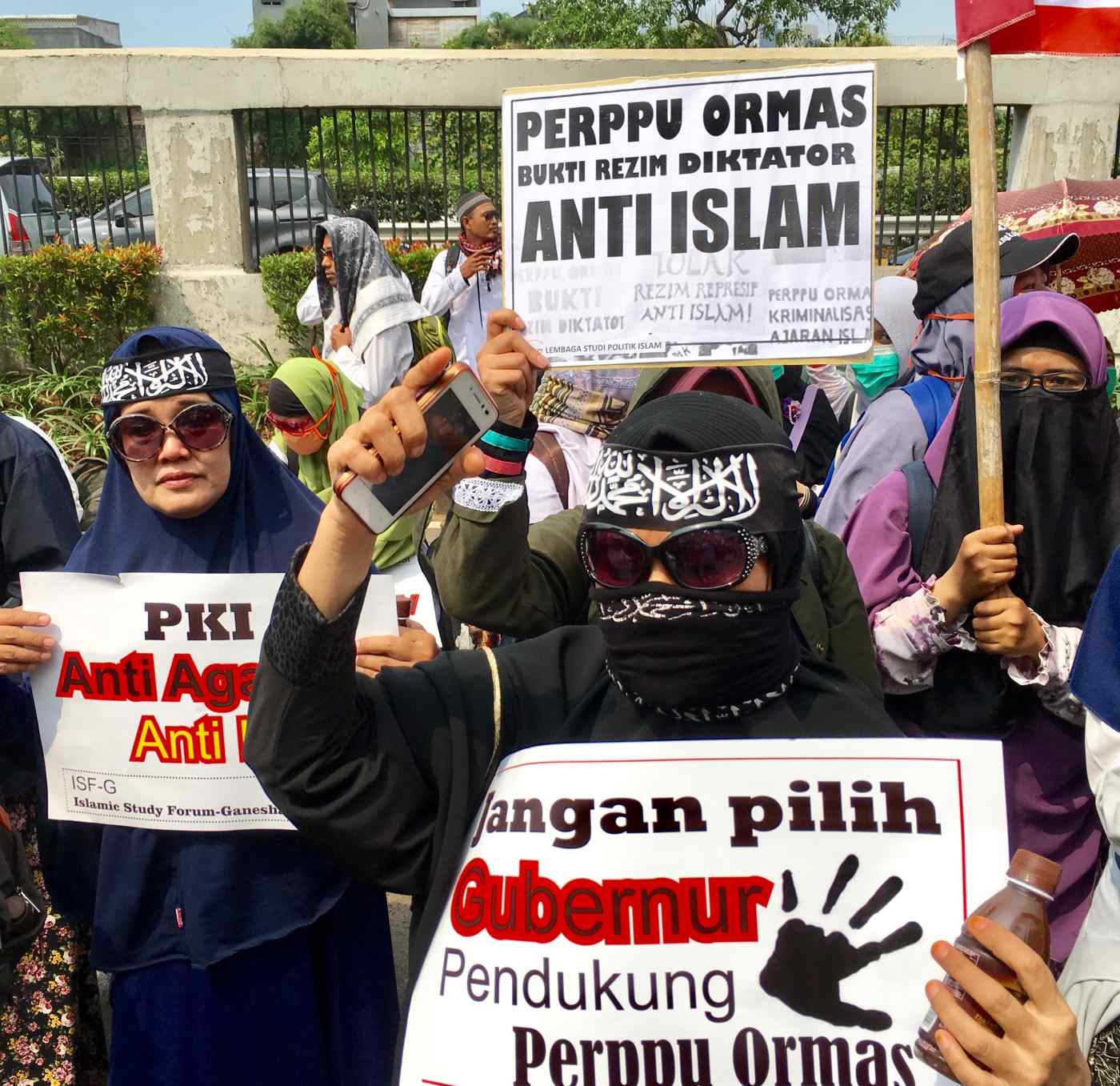 JAKARTA -- Moderate Muslims in Indonesia, a regional power that accounts for some 40% of the gross domestic product of the Association of Southeast Asian Nations, are becoming more receptive to a fundamentalist version of Islam that seeks to impose religious rules and values on everyone. Although more than 80% of the country's 260 million people are Muslims, Indonesia has, from the beginning, been a multicultural society of different faiths. Its motto is "unity in diversity."

Indonesia has attracted a lot of foreign investment, thanks to its status as the world's fourth-largest country by population and its membership in the Group of 20. Foreign direct investment in the April-June quarter came in at around $8.3 billion, up 15% on the year. Its inflation-adjusted economic growth in the quarter was around 5%. But if political stability and pluralism are damaged, the country's growing prosperity could be at risk. A growing wave of Islamization is spreading from the countryside to the more secular capital, Jakarta. This wave is characterized by moves to criminalize lifestyles and ideas that run counter to Shariah or Islamic law, such as drinking, homosexuality and communism.

Jakarta's new governor, Anies Baswedan, took office on Monday, having won the backing of hard-line Islamist groups. Indonesia, long known as a moderate and tolerant Muslim nation, is at a turning point.

"Dear Mujahedeen! Your participation in this action shows your love for religion and the country." So said Habib Rizieq Syihab, leader of the Islamic Defenders Front, or FPI in Indonesian, addressing a rally outside the House of Representatives in central Jakarta on Sept. 29. The ostensible reason for the gathering was to condemn a failed coup in 1965 by the Communist Party of Indonesia, but the true aim of the group was to protest President Joko Widodo's efforts to marginalize hard-liners.

Rizieq was not at the rally. His message was delivered by phone from Saudi Arabia, where he lives in self-imposed exile. He faces prosecution in Indonesia, and the government sees him as the mastermind behind the FPI's radical actions. Front members clad in white heard Rizieq's speech through loudspeakers. They and other Islamist groups chanted their opposition to a proposed legal change that would make it easier to restrict radical sectarian groups. Several thousand people took part, and for a while it looked like violence might break out between the protesters and security forces.

The FPI is pushing for Indonesia to be governed by Shariah. It has distanced itself from the country's two main relatively moderate Muslim groups, Nahdlatul Ulama and Muhammadiyah, which are more cooperative with Widodo.

The FPI supported Baswedan in the runoff election for Jakarta governor in April, playing a key role in defeating incumbent Gov. Basuki Tjahaja Purnama, better known as Ahok, who is Christian and of Chinese descent. The FPI staged a mass protest before the vote, alleging that Ahok insulted the Quran and demanded his resignation. He was eventually convicted on blasphemy charges and sentenced to two years in prison.

The FPI is not the only hard-line group that uses religious decrees, or fatwa, to attack anyone and anything that runs counter to a strict interpretation of Islam. In 2016, Islamist groups vandalized stores decorated for Christmas in large cities, including Surabaya and Bandung. Illegal acts of religious intolerance have happened repeatedly.

Some moderate Muslim groups and less devout Muslims are turning a blind eye to such acts. A senior member of Muhammadiyah caused a stir in June when he called for a boycott of Starbucks. The U.S. coffee shop chain's support for the rights of sexual minorities is believed to be behind it, and some Muslims have heeded the call.

LGBT people have gained wide acceptance in liberal democracies, but they are discriminated against in many Muslim countries. Homosexuality is not illegal in Indonesia, but police detain gay people for violating anti-pornography laws. Placards and banners reading "No gays, no lesbians" are a common sight at hard-line Islamist rallies.

Indonesia is experiencing an Islamic revival, according to Al Chaidar, an Islamic politics expert and lecturer at University of Malikussaleh. "The Indonesian Muslim community is disappointed with Joko Widodo's government today, believing it is moving away from the interests of Islam," Chaidar said.

The president's ruling coalition consists of secular parties and moderate Islamic parties, and Chaidar said Widodo's efforts to keep the country secular have cut off conservative Muslims' lobbying channels to the government. They have responded with mass protests, he said.

Moderate Muslims in Indonesia are susceptible to the influence of hard-liners and sometimes embrace radicalism. Extreme ideologies from the Middle East are making their way into the country through social media.

Experts have warned that radical ideologies are spreading among the young at traditional boarding schools, known as pesantren, which are common in regional cities. Some are also attracted to the Islamic State group and other militant organizations through social media. A local organization that identifies with the group was behind the May bomb attack at a bus terminal in eastern Jakarta.

National police believe that the mastermind of the attack was Indonesian extremist Bahrun Naim, a suspected member of IS now living in Syria. Authorities are trying to block terrorism-related information on social media. Still, many young Muslims travel to Iraq or Syria to join the group. Security officials are monitoring them as would-be terrorists, and the government is considering barring such people from re-entering the country.

Earlier this year, Indonesia temporarily banned Russian messaging app Telegram, alleging that it allows potential attackers to communicate with each other. Indonesia and Australia co-hosted a counterterrorism conference with neighboring countries in the northern city of Manado in July. Participants agreed that their intelligence agencies will cooperate to prevent the spread of terrorism-related information on social media.

The security forces have succeeded in weakening Jemaah Islamiyah, a militant organization sympathetic to al-Qaida, but that has not prevented young militants from returning to the country after joining IS overseas. Although IS has been losing territory in Syria and Iraq, for example, Gen. Gatot Nurmantyo, commander of the Indonesian National Armed Forces, warns the group has cells around the country. Islamization began in smaller cities and is making its way into Jakarta and major urban areas. Hard-liners like the FPI seek to enforce Islamic practices, such as having people pray five times a day and prohibiting alcohol and pork.

The government has failed to counter this trend. It revised an ordinance in July disbanding Hizbut Tahrir Indonesia, a group that calls for the imposition of Shariah throughout the country. The government's move was an effort to uphold secularism, but Widodo's heavy-handed approach makes it easier for opponents to brand him as anti-Muslim.

That could cut short the president's bid for re-election in 2019. The FPI and other Islamist groups are already criticizing Widodo for authoritarianism. Widodo has responded by setting up a body of experts, led by former President Megawati Sukarnoputri, to promote Indonesia's five foundational principles, called Pancasila, one of which is diversity.

Jakarta's new governor was a senior member of Widodo's campaign team in the 2014 presidential election and served as his education and culture minister. The soft-spoken Islamic scholar, who studied in Japan, deepened his ties with Islamists. He was rewarded with FPI backing that helped him defeat Ahok, who was previously popular with Muslims and non-Muslims alike. The FPI is now demanding that Baswedan close a resort in northern Jakarta to crack down on prostitution. He may move the capital's policies in a more conservative direction.

A man holds a Quran over the head of Jakarta Gov. Anies Baswedan at his inauguration ceremony in the Indonesian capital on Oct. 16.   © Reuters

"Starting Oct. 16, we will start the change of Jakarta," he told reporters after his inauguration ceremony at the presidential palace in the capital on Monday. "We plan to run all the promises. Usually people call them work programs, but we call them promises."

Baswedan will lead a metropolis of more than 10 million people, which faces major urban challenges, such as traffic jams, rising house prices and security concerns -- Jakarta recently placed fourth from bottom on The Economist Intelligence Unit's list of safe cities.

Amid this growing Islamist influence, people are turning their attention to the next presidential election. An opinion poll conducted on Sept. 9 by Indonesian think tank the Center for Strategic and International Studies showed 50.9% support Widodo, while 25.8% support the leader of the opposition Gerindra Party, Prabowo Subianto.

Subianto may run again after his failed 2014 presidential bid. If so, he is likely to win support from conservative Islamist parties and organizations. Subianto helped unite the FPI and other Islamists behind Baswedan in the Jakarta election. If Widodo's hard-line opponents continue to gain momentum, Indonesia may show a less moderate face to the world after the vote.