JAKARTA -- In a recent speech to one of his ruling coalition members, the Nasdem party, President Joko Widodo criticized Indonesia's dependence on imported food. His outburst highlighted the political impetus behind a bold plan to attack the country's food cartels, announced in early September by Rizal Ramli, one of his most senior ministers. 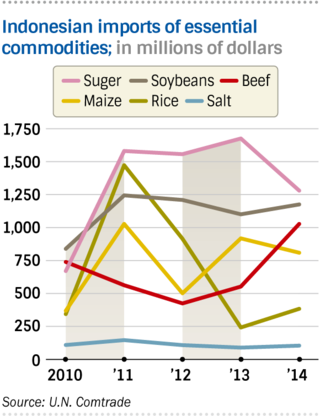 Widodo linked food imports to the weak rupiah, the nation's currency. "We import commodities like sugar, soybeans, maize and salt, and even rice and fruit," he said Sept. 21. "This is what causes fluctuations in our balance of trade, because we need dollars to pay for these imports. This is one of the reasons the dollar is as [strong as] it is now."

One revealing example of the challenges facing the government as it pursues national self-sufficiency in basic foods is Indonesia's reliance on salt imports.

Unlike temperate climate commodities such as wheat, there are no natural barriers to increasing domestic production of salt. Boasting the world's fourth longest coastline, a tropical climate and a long, hot dry season, Indonesia is well-positioned to compete in international salt markets.

Salt was a state monopoly under the Dutch colonial administration, which enabled the then-government to hold down prices paid to the small farmers in East Java and Madura who produced most of the domestic supply. PT Garam (garam means salt in Indonesian) is a state-owned company created after independence in 1945 from the remnants of the Dutch monopoly. Earlier this year, the Ministry of Marine Affairs and Fisheries unveiled a plan to achieve salt self-sufficiency by 2017. The plan calls on the Ministry of Trade to prevent holders of industrial import quotas from bringing in consumer salt. It also provides PT Garam with funding for buffer stocks to stabilize prices and for the acquisition of land in Kupang, West Timor, for salt production.

In 2011, the same ministry set 2014 as a salt self-sufficiency target. However, imports increased and the target was missed.

The main obstacles to salt self-sufficiency are political. Importers with the connections needed to obtain import licenses can earn vast sums by buying cheap salt overseas and rigging domestic markets, much as the Dutch did before independence.

Indonesia consumes about 4 million tons of salt per year, but the country lacks the capacity to produce the higher-grade industrial salt used to make pharmaceuticals, chemicals and other products. In 2014, Indonesia imported 2.3 million tons of salt, mostly from Australia. Total imports were valued at $104 million, according to U.N. Comtrade, a database of trade statistics maintained by the United Nations.

According to Indonesian government data, the average wholesale price of 1,500 rupiah per kilogram of salt is three times current import prices. This gives companies with import licenses huge money-making opportunities. Their profiteering drives up domestic retail prices and hurts consumers.

Government regulations reserve the consumer salt market for domestic producers, so in theory only industrial grade salt is imported. But according to Ramli, whose title of coordinating minister for maritime affairs covers a wide range of responsibilities, importers use industrial salt quotas to bring in consumer salt. They then release their inventories at harvest times to drive down the prices Indonesian salt farmers can get.

"The seven largest private importers call themselves the seven samurai," Ramli said. "But I call them the 'seven robbers.'"

Imposing discipline on importers has proven difficult because government officials sell access to the domestic market for bribes. Companies will not invest in facilities to produce industrial grade salt if hefty profits can be made from acquiring and distributing imported supplies.

In a sign the government is hardening its stance, police on Sept. 13 arrested the president director of PT Garindo Sejahtera Abadi -- one of the seven companies identified by Ramli -- in connection with an attempt to bribe trade ministry officials to increase the company's import quota. Chindra Johan was charged with paying officials 35,000 Singapore dollars ($24,500) for permits to import 116,375 tons of salt this year, according to Indonesian media reports.

Ramli -- who is also responsible for energy and mineral resources, transportation and tourism -- said the government plans to replace import quotas with tariffs to break the grip of the salt cartel.

Switching from quantitative barriers to tariffs would open up imports to all businesses, including those without government connections. This should bring competition to the market. Tariffs also generate revenue for the government while providing some protection to small producers against competition from foreign companies.

Ramli said tackling salt and other food cartels is a government priority because of the rising cost of living. However, he acknowledged that salt importers are a relatively small problem compared to cartels controlling other commodities.

Imports of soybeans, sugar, beef and maize are also controlled by a small number of quota holders. Ramli said change will require firm political commitment, given the widespread protectionist sentiment behind the quota system. "The cartels portray themselves as nationalists," he said, "but they are actively working against the interests of small farmers in Indonesia."

The Commission for the Supervision of Business Competition, a government body established in 2000, has repeatedly investigated food cartels but has lacked the political clout to enforce changes to trade policy.

The commission, known by its Indonesian initials KPPU, recently announced plans to hold a 30-day hearing to present findings from an investigation into price-fixing in the domestic beef market and to hear responses from the industry.

Beef import quotas became controversial in 2013 when the former president of the Prosperous Justice Party, or PKS, a conservative Islamic political organization, was jailed in connection with a beef import scandal. Luthfi Hasan Ishaaq was sentenced to 16 years in prison for accepting bribes in exchange for arranging an increase in a company's beef import quota.

Beef imports drew further attention in August, when prices spiked to $10 per kilogram from $6 in July, following a government decision to reduce cattle imports from Australia. Although ostensibly intended as a measure to stimulate domestic production and reduce dependence on imports, the drop in supply benefited mostly importers and traders rather than feedlots, which do not have spare capacity.

Meanwhile, the government has fresh concerns that rising food prices are driving up wage demands. Food prices rose an annual 9.26% in August, faster than the core inflation rate of 4.9% for the same period, according to government statistics. Indonesia's core inflation measure excludes volatile food and energy prices. In early September, labor unions took to the streets to demand a 22% rise in the minimum wage.

Ramli points to the example of salt, arguing that replacing import quotas with tariffs will provide incentives for domestic producers without imposing sharp price rises on consumers. Success, he reasons, will embolden the government to dismantle quotas for other imported commodities.

That remains to be seen.