JAKARTA -- A railway system under construction in Greater Jakarta avoided hitting the brakes Friday after Indonesia's top ministers put together a funding scheme for the 29.9 trillion rupiah ($2.14 billion) project.

Ministers told reporters Friday night that they agreed on state railway operator Kereta Api Indonesia shouldering much of the project cost, or 25.7 trillion rupiah, via an equity injection and a syndicated loan. State construction company Adhi Karya will cover the remaining 4.2 trillion rupiah. "We have agreed on the financial capability of Kereta Api and Adhi Karya. Therefore, there will be [hopefully] no speculations concerning the sustainability of these two very important institutions," Finance Minister Sri Mulyani Indrawati said.

The funding announcement may end the policy flip-flops over the past two years that have illustrated the potential pitfalls of President Joko Widodo's aggressive infrastructure development program.

The 81.6km LRT Jabodebek, connecting Jakarta and three satellite cities, is expected to ease heavy traffic jams in the region, which has a population of about 30 million.

Adhi Karya started construction in September 2015, with completion targeted for 2019. But the money for the light rail transit project was not secured when work began, resulting in twists and turns in funding plans.

In May, the government appointed Kereta Api to partially fund the project, a move designed to reduce the burden on state coffers. By law, Indonesia's budget deficit is capped at 3% of gross domestic product.

Disarray within the cabinet surfaced after Luhut Pandjaitan, the chief maritime minister and one of Widodo's closest allies, recently said the project's cost will rise to 32 trillion rupiah from the previous 27 trillion rupiah due to changes in the signal system. This prompted State Enterprises Minister Rini Soemarno to fire off a letter to Indrawati and Transportation Minister Budi Karya Sumadi asking for the removal of Kereta Api from the funding process, stating that pouring too much money into the project would cast doubt over the company's ability to maintain its service quality.

"We propose that Kereta Api Indonesia will not be the organizer of funding or the investor ... but only acts as the organizer and the operator," she wrote in the letter, which was widely reported in the local media.

On Friday, Soemarno said the cost was settled at 29.9 trillion rupiah after ministers agreed to reduce some noncore projects.

Kereta Api Indonesia, or KAI, will receive a total of 7.6 trillion rupiah in capital injections from the state budget until 2018. The remaining 18.1 trillion rupiah is expected to come from a syndicated bank loan guaranteed by the government. 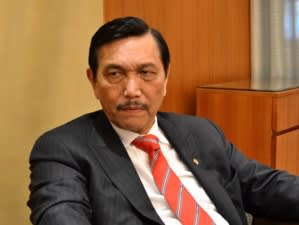 Pandjaitan, who oversees LRT project coordination, said all state lenders will be involved and that some private banks, such as CIMB Niaga and Bank Central Asia, have expressed interest. The financial closing is expected to be reached near the end of the month for a loan period of up to 17 years.

Indrawati said the government will help Kereta Api pay off the loans through mechanisms such as subsidies of LRT tariffs -- and she suggested more capital injections over the next 12 years.

"Therefore, there won't be too heavy a burden on [annual] state budgets, as [the financial support] will be distributed within 12 years," Indrawati said. "And KAI can keep doing its mission and functions of serving the public."

Three years into his presidency, Widodo's commitment to solve a massive shortage of roads, railways, ports and other infrastructure has started to clash with the government's need to maintain a healthy budget. Delays in cutting red tape also have produced mixed results in attracting investment from the private sector.

Though projects that had stalled for decades have been revived under his tenure, Widodo's tactic of using state-owned enterprises as investment vehicles has been criticized by some economists as taking on too much risk. Rifts among economic ministers over funding methods have spilled into the public, raising concerns among investors.

Faisal Basri, an economics lecturer at the University of Indonesia, has described Widodo's style as "just do it ... [and] if something goes wrong, we can make corrections." Basri warned that inadequate planning bears the risk of ballooning costs and corruption. 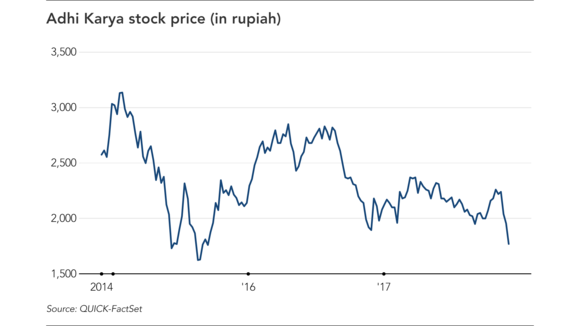 The compromise announced Friday will provide some assurance to investors, who have been spooked by worsening finances at state-owned enterprises tied to infrastructure, which are now shouldering much of the investment.

Shares of Adhi Karya fell 3% Friday ahead of the announcement, hitting their lowest in two years and three months. The stock is down 17% for the year.