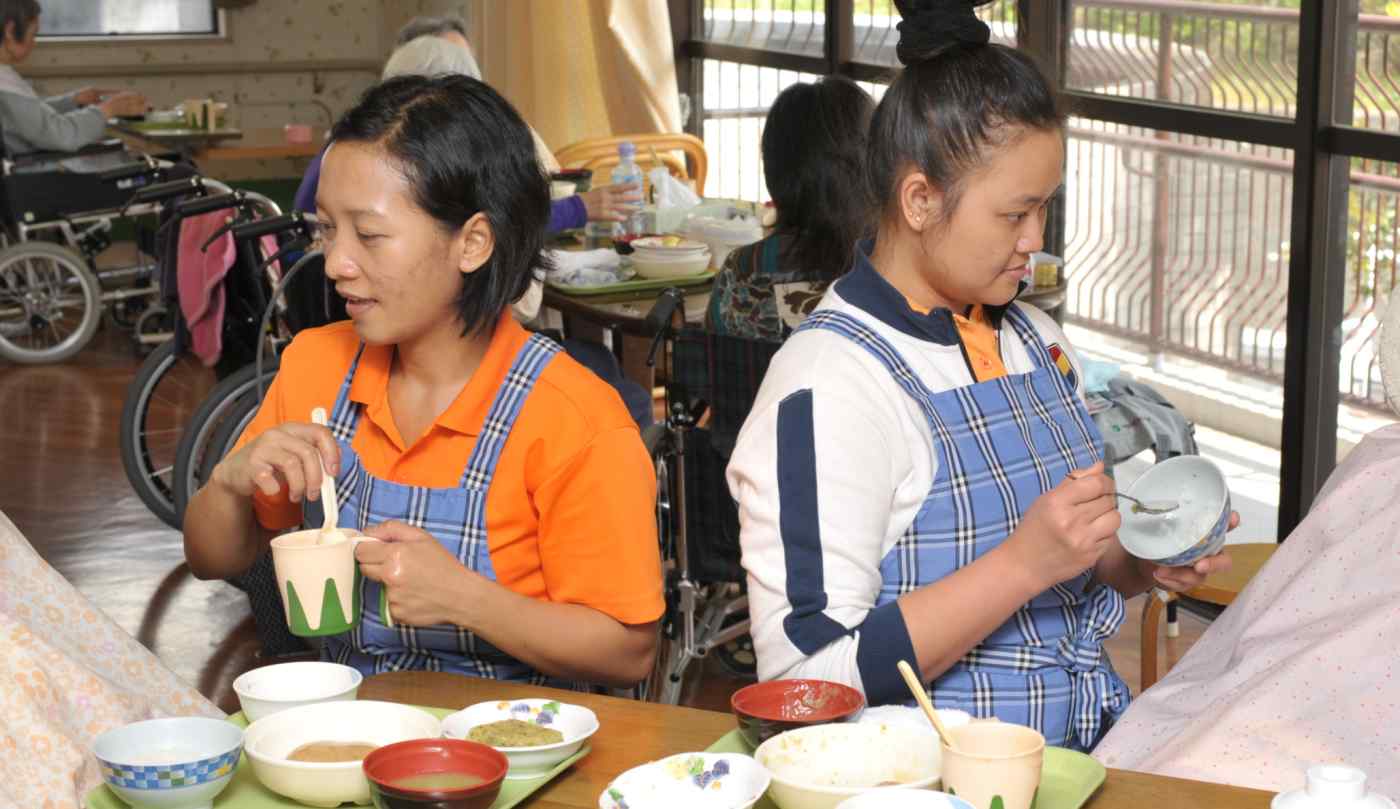 Care workers from Indonesia are permitted to work in Japan through a bilateral economic partnership agreement.
August 11, 2016 05:10 JST | Japan
CopyCopied

TOKYO -- The Japanese government is set to take steps to smooth the way for foreigners to enter and thrive in the domestic labor market, with the reforms targeting hospitalization, taxes and residency requirements.

The economic growth strategy devised by the central government in June highlights the need to aggressively attract foreign talent. The Ministry of Economy, Trade and Industry and others are hearing opinions from companies worldwide regarding bringing information technology specialists into Japan.

The trade ministry aims to amend related legislation and tax rules during the regular Diet session in 2017.

The Ministry of Health, Labor and Welfare seeks to allay concerns among foreigners living in Japan about going to hospitals. Only about 20 hospitals nationwide are equipped to handle emergency cases involving foreigners. The goal is to double that number by March and raise it to 100 before the 2020 Olympics in Tokyo.

The government will help cover costs arising from hiring interpreters and offering documents in English. Multilingual versions of questionnaires and hospital signs cost an average of 3 million yen ($29,619), according to estimates, and the government generally will pay half the expense. For medical interpreters and similar services, the state will subsidize a hospital to the tune of roughly 9 million yen.

Officials also seek to help foreigners on the tax front. If a foreign worker dies in Japan due to unforeseen circumstances such as an accident, the inheritance tax applies to assets held in all jurisdictions. This discourages foreign talent with sizable assets from taking management positions in Japanese companies. Many are urging reform, and METI intends to coordinate with the Finance Ministry and ruling parties to apply the inheritance tax only to Japanese assets starting in fiscal 2017.

Japan currently admits care workers through economic partnership agreements, but those are limited to countries such as Indonesia and the Philippines. The number of guest workers is expected to increase by allowing care givers who learn Japanese or professional skill sets at educational institutions to work in Japan. Necessary legislation is to be enacted during the extraordinary Diet session this fall, with the measures taking effect next fiscal year.

Researchers and other highly skilled foreign professionals likely will find it easier to obtain permanent resident status. Currently, a foreign national needs to reside in Japan for five years before gaining that status. Government agencies are debating lowering the bar to less than three years, with a decision expected this year at the earliest. South Korea allows those with PhDs in high-tech fields to apply for permanent residency after a one-year stay.

Japan also aims to cut red tape surrounding investment and establishing new enterprises in order to help foreign corporations do business. Surveys examining barriers to foreign businesses and professionals have begun, and they will inform initial reforms to be decided by year's end at the soonest.