TOKYO -- Japan's Defense Ministry plans to expand and upgrade its fleet of Aegis-equipped destroyers with a system that will vastly enhance its effectiveness against missile attack.

Under the ministry's plan, two destroyers will be built with an upgraded version of the Aegis Ballistic Missile Defense system that is capable of shooting down high-altitude ballistic missiles and low-altitude anti-ship missiles simultaneously. Two existing destroyers will be retrofitted with the system.

The ministry also plans to introduce a sophisticated communications system that allows its Aegis destroyers and aircraft to share information on enemy targets for more coordinated and effective anti-missile operations.

The enhanced missile defense capabilities are intended in part for the defense of U.S. vessels in scenarios falling under the umbrella of collective self-defense.

Four of the Maritime Self-Defense Force's six Aegis destroyers are equipped with the Aegis BMD system, which allows them to intercept and destroy short- and medium-range ballistic missiles.

While using this system, however, a destroyer is vulnerable to attack by anti-ship missiles or combat planes. Escort vessels must thus be deployed to guard a destroyer conducting missile defense operations in areas where such attacks are likely.

The computer system at the heart of the upgraded BMD system will have enough processing power to deal with both types of missiles, obviating the need for escort ships.

The Aegis system and its latest upgrade were developed by the U.S. 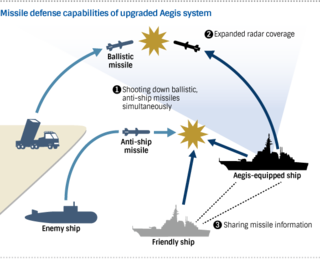 Currently, three Aegis ships must be deployed at any given time to protect the entire Japanese archipelago from missile attack. The current fleet of four destroyers with the BMD system is only just adequate for the job, given their maintenance schedule.

The new system will expand the radar coverage of the Aegis ships enough that all of Japan can be covered by only two ships, giving the fleet greater room to maneuver.

Another key element of the Defense Ministry's Aegis enhancement plan involves cooperative engagement capability, a system of hardware and software that enables the sharing of radar and weapons systems data on air targets among Aegis ships and aircraft.

The two vessels to be built will each include a CEC system.

Currently, Aegis destroyers can intercept only missiles their own radars have detected. The new CEC system, however, will allow them to engage missiles detected by friendly Aegis ships, even if their own radars fail to detect them.

As an example of collective defense operations, the Japanese government described how the SDF would defend U.S. vessels carrying Japanese nationals in the event of a military emergency on the Korean Peninsula. In such a situation, a CEC system would make it easier for MSDF Aegis destroyers to shoot down missiles targeting U.S. ships.

The first of the two new Aegis vessels is scheduled to be commissioned in fiscal 2020.