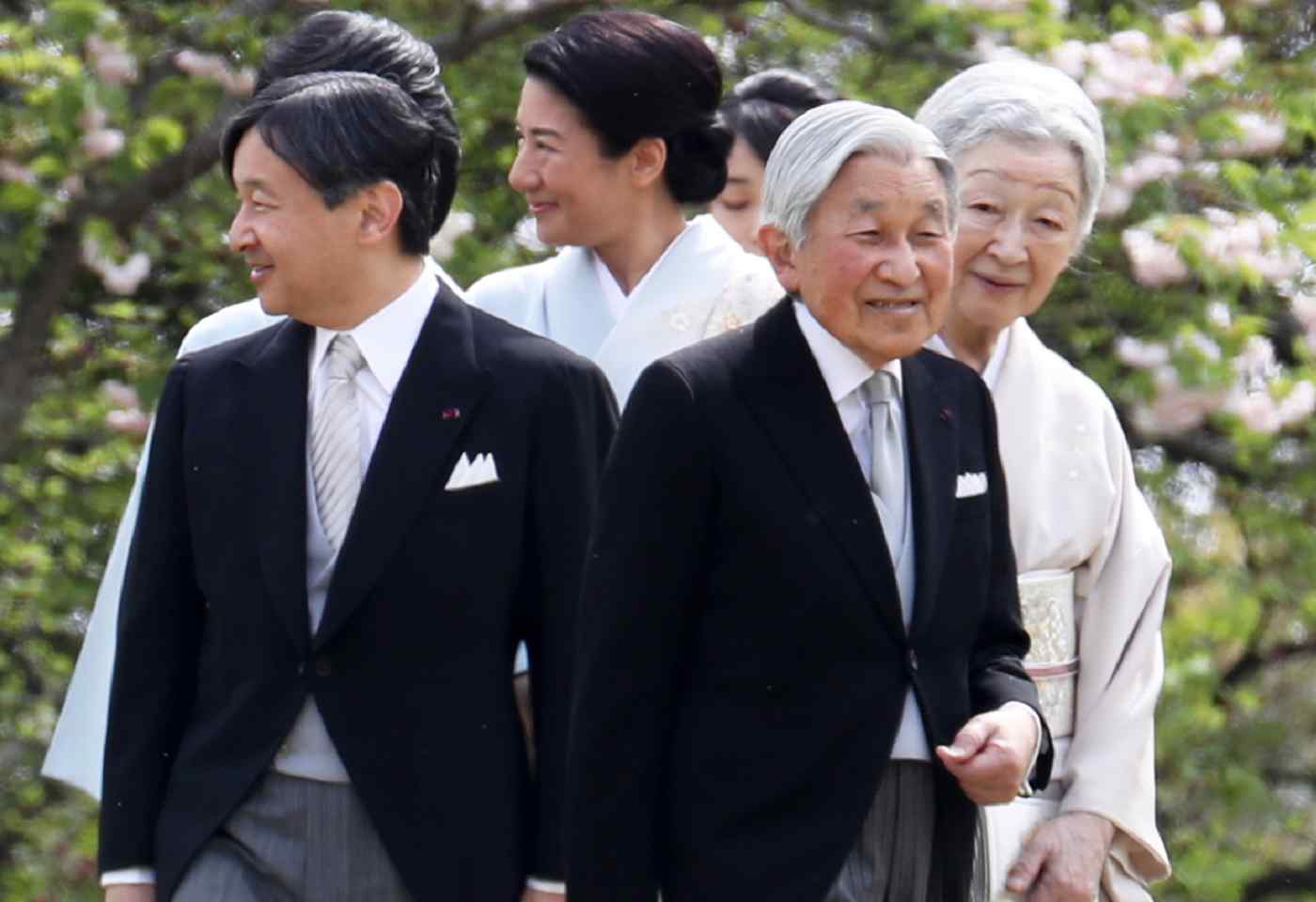 TOKYO -- As Japan prepares for the first abdication of an emperor in two centuries, it is wrestling with the question of how to handle this unusual handover in an era when the monarch is regarded as a symbol rather than a living god.

Emperor Akihito will step down April 30, 2019, a date determined Friday by a government council including Prime Minister Shinzo Abe, Imperial family members and senior lawmakers. Crown Prince Naruhito will accede to the throne the following day, at which point the current Heisei era will end and a new one yet to be named will begin.

"We will put forth every possible effort to ensure that the abdication of His Majesty the emperor and the accession of His Highness the crown prince to the Imperial throne takes place without incident amidst the good wishes of the Japanese people," Abe said. The possibility of an emperor relinquishing the throne before death had not been envisioned in modern times. The last Japanese monarch to do so was Emperor Kokaku in 1817. The transition will involve many issues that did not arise when Akihito assumed the throne nearly three decades ago.

"His Majesty's abdication is a first in our constitutional history," Chief Cabinet Secretary Yoshihide Suga said Friday. He cited the retired emperor's residence and an organization for providing support for his life afterward as some of the examples of the issues to be considered.

The Imperial Household Agency is combing through old records of past abdications and figuring out how to adapt the proceedings in light of the modern roles of the emperor and his family.

The succession ceremonies are "an important occasion -- they show that the emperor's symbolic role has ended and that the crown prince has become the new emperor," a senior Imperial Household Agency official said. "We have to consider how to make them easy for the public to understand."

Akihito's accession in January 1989 took place after his father Hirohito's death from a lengthy illness that had cast a pall over the country and brought a heavy sense of stagnation to the society. Only that September, after the mourning period, was a committee set up to handle preparation for accession-related rites, and ceremonies to proclaim and celebrate the new emperor's enthronement were not held until November of the following year.

Akihito decided to step down before his death in part to avoid placing such a burden on the public. "When the emperor has ill health and his condition becomes serious, I am concerned that, as we have seen in the past, society comes to a standstill and people's lives are impacted in various ways," he said in the August 2016 address in which he indirectly expressed his wish to abdicate.

Akihito consistently showed such consideration for the public as he went about his duties as a symbol of the Japanese state. The Imperial Household Agency said in 2012 that steps would be taken to simplify customs surrounding the emperor's funeral, including cremation instead of burial -- a break with centuries of tradition -- and a smaller mausoleum.

The agency also plans to streamline the succession ceremonies as much as possible, in accordance with the emperor's wishes.

"Times will change. I think that what is asked [of the Imperial family] will change with them," Prince Akishino, who will be first in the line of succession after his brother Naruhito assumes the throne, told reporters last month. "I believe that always has to be kept in mind."

With a trip last month to remote islands in the southwestern prefecture of Kagoshima, Akihito completed a second round of visits to all 47 prefectures. He emphasizes direct contact with the public, even those on the outer edges of Japanese society. This hands-on approach has won him sympathy, respect and affection and firmly established the emperor's symbolic role.

Nearly 30 years into the Heisei era, the Imperial family must reckon with the changes that globalization and the internet have wrought in Japanese society. Naruhito, who has in the past talked about "new official duties that are in step with the times," has expressed determination to follow his father's example.

"I would like to honor the wishes of His Majesty," he said in June ahead of a visit to Denmark, "as I continue to devote my whole self to fulfilling my duties."

The crown prince has shown the same personal touch as his father. During a stroll in Copenhagen, he chatted with locals and accepted a selfie request with a smile.

Hideaki Oda, a former head of the old Construction Ministry's River Bureau, remarked that Naruhito "has a talent for getting people to talk." Oda, who corresponds with the crown prince on water issues -- a particular passion of Naruhito's -- recalled a 2003 visit to Japan by Mahmoud Abu-Zeid, then the head of the World Water Council. The taciturn Egyptian chatted comfortably with Naruhito even at their first meeting, Oda said.

In the run-up to his accession, the crown prince is considering what sort of relationship he wants to build with the public, said Hirohito Suzuki, an assistant professor at the Graduate School of Project Design in Tokyo.

"I expect that the people will also make known what kind of Imperial family they want, and their relationship in this new era will involve the public and the Imperial family supporting each other," he said.