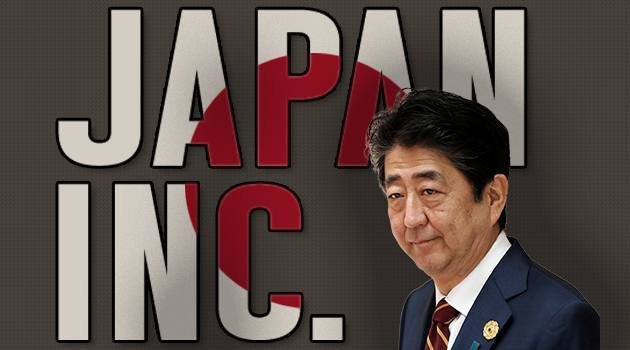 TOKYO -- Having grown impatient with Japan Inc.'s hoarding of cash, the Japanese government will introduce provisions in its corporate tax rules starting in fiscal 2018 to encourage companies to raise wages and capital investment.

Companies in Japan were sitting on a record 199.5 trillion yen ($1.76 trillion) in cash and deposits at the end of September 2017. That is equal to 40% of Japan's gross domestic product and up by more than a third from five years earlier. Prime Minister Shinzo Abe believes this pile of cash lies at the root of Japan's economic malaise and deflationary pressure because it could have been spent on raising workers' wages or investment, thereby lifting economic growth and inflation.

The ruling coalition, comprising the Liberal Democratic Party and junior partner Komeito, agreed Thursday to an outline of tax system revisions, including plans to introduce a carrot-and-stick measure in which companies that raise wages and capital investment will see their effective tax rate reduced, while those that do not despite posting strong earnings will see a tax increase.

On top of the already decided reduction in the corporate tax rate to 29.74% from 29.97%, the special measures will allow big companies to cut their effective tax rate to around 25% if they increase their employees' pay by more than 3% and expand investment on fixed assets and human resources. The new rules are easier on small and medium-size businesses: To qualify for the tax break, they only need to lift wages by 1.5%; there is no fixed investment requirement, and the rules on human capital investment are more lax.

Companies will see a further reduction in their effective tax rate to around 20% if they invest in technologies related to the internet of things and raise their productivity. Big corporations that report strong earnings but do not increase their capital investment or raise wages will not be allowed to take advantage of some tax incentives.

The special tax provisions will take effect in fiscal 2018, starting next April, and run for three fiscal years.

The move is also partly a reaction to the global race to cut business taxes in hopes of pulling in foreign investment. The U.S. is finalizing new tax rules that will cut the rate on corporate income to 21% from the current 35%. Congress was originally discussing reducing it to 20%. France is aiming to lower the rate in stages to 25% by 2022, from 33.33% at present.

Japan's economy has expanded for seven consecutive quarters through the third quarter of this year, the longest growth streak in 16 years. But companies remain skeptical of the country's long-term growth prospects due to its aging, shrinking population. This is making them tightfisted about capital investment.

The painful economic downturn in the early 1990s is also still vivid in the memories of many companies, making them eager to hoard cash rather than increase wages, particularly since this brings a permanent increase in costs.

Stagnant wages, in turn, mean consumers are reluctant to spend, dampening inflationary pressure. Japan's inflation rate still remains some way below the central bank's target of 2% despite aggressive monetary easing over the past five years. 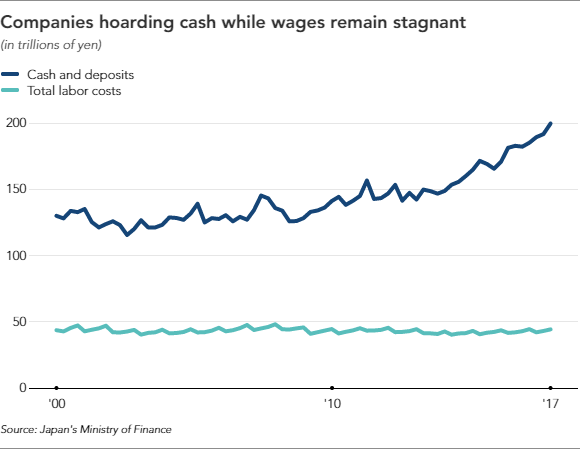 But Koya Miyamae, senior fiscal analyst at SMBC Nikko Securities, believes the tax breaks will not do much to get companies to behave as the Abe government wants.

"Raising wages is a permanent cost increase for companies, and this temporary tax incentive is unsuited to prompting wage rises," he said in a report, adding that even for capital investment, "there is the problem of free riding by companies who were already planning capital expenditures before the measures were decided."