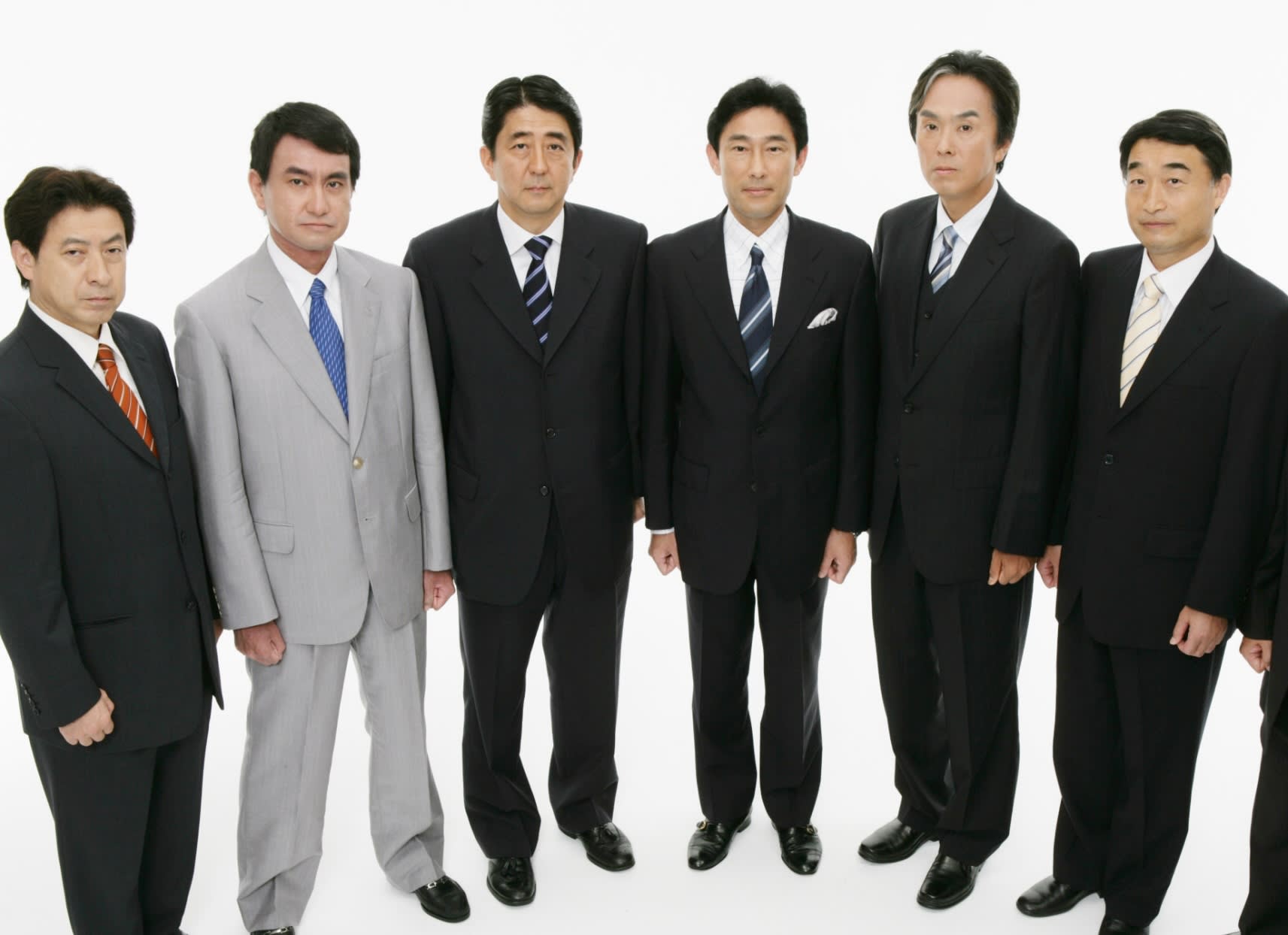 Foreign Affairs Minister Fumio Kishida, third from right, is pictured with other up-and-coming stars of Japan's Liberal Democratic Party in a 2005 poster.

TOKYO -- Japanese Foreign Minister Fumio Kishida, 58, seems to be biding his time in hopes of becoming the next Liberal Democratic Party president. But could he be taking too much time?

In the evening of July 28, a birthday party was thrown for Kishida at a Chinese restaurant in Tokyo. There, a number of middle-ranking and younger Diet members directly urged Kishida to seek the LDP leadership. "I can't wait to work for Prime Minister Kishida," one attendee said. Kishida merely smiled. When the party was over, one younger Diet member said with a bitter laugh that Kishida had remained noncommittal from beginning to end.

But Kishida seems to be one of the most eligible candidates for LDP chief. Kishida and Prime Minister Shinzo Abe go way back, to the days when they were both novice Diet members. Kishida was first elected to the lower house in 1993 -- the same year won his first lower house seat. Since then, Kishida has won eight consecutive elections, as has Abe.

Kishida heads up one of the LDP's most prestigious factions, having taken over the group from Makoto Koga, 75, in 2012. The long-established faction, known as Kochi-kai, was founded by Hayato Ikeda, who served as prime minister from July 1960 until November 1964. He was instrumental in Japan's phenomenal economic growth in the years after World War II. The faction has a little over 40 members at present.

Every so often, Kishida drops hints about his ambitions. In a street speech during last December's lower house election campaign in Hiroshima, he said he wanted to go one notch higher. When asked by one of his supporters to clarify his comment, he just replied, "You will know in time."

This may mean that he is indeed nursing an ambition to be prime minister. However, he has not confided even to his closest followers when he might commit. A lot of people have been pinning their hopes on Kishida as a champion of liberalism that sharply contrasts with Abe's far-right conservatism.

Many within the LDP think Kishida aspires to be the party president in the future, though he also wants to avoid a head-to-head race with Abe. A source close to Kishida predicts the foreign minister will bide his time as long as Abe remains strong.

His battle plan may be influenced by an experience in 2000, when Koichi Kato, 76, then head of the Kochi-kai, staged a failed rebellion to oust then Prime Minister Yoshiro Mori by joining with opposition parties to submit a no-confidence motion.

The revolt split the Kochi-kai in two -- those who sided with Kato and those who did not -- and undermined the reach of the liberal camp within the LDP. Kishida, who weathered the hardship with Kato, resolved to leave the party if he had to.

Since then, Kishida has been quietly building a solid track record within the party and government. Some speculate that his immediate target is to be the LDP's secretary-general.

It would be the best scenario for him to serve in key government posts under Abe and build broader support from both liberal and conservative Diet members before making any possible announcement that he intends to run for LDP president.

Back when each was a rookie lower house member, the two went on a junket to Taiwan. Kishida ended up passing out drunk after tossing back all glasses offered to himself and Abe, a lightweight when it comes to alcohol. Taiwanese often offer numerous toasts at the dinner table, and it is considered rude not keep drinking along with your hosts. So Kishida took one for the team, and Abe seems to feel he still owes Kishida.

One concern is the clock. It keeps ticking, and Kishida does not seem to be in the midst of a lead-up to a campaign. A Diet member who is close to Kishida and joined the Kochi-kai because of his affinity for the faction's liberal posture seems to be running out of patience. "If Kishida," he said, "does not unveil his ambition to vie for the LDP presidency soon, it is about time we find another leader to follow. Even Yoshimasa Hayashi or Itsunori Onodera would do."

Hayashi, 54, is the agriculture, forestry and fisheries minister, while Onodera, 55, is a former minister of defense.