NEGOMBO, Sri Lanka -- Along Sri Lanka's west coast, towns like Negombo have abundant green cinnamon farms that keep peelers of the bushes' fragrant inner bark busy. Pesthathanthri Sumathipala, a seasoned peeler, is up at dawn to lead a small crew of peelers through a 20-hectare farm. Skilled eyes are needed to choose which branches to slice for the day's harvest.

Later, he sits in a half-lit, crumbling building filled with the aroma of the spice. The sharp fragrance spreads as the 57-year-old scrapes the outer bark, massages the golden brown inner bark and then, with a sharp knife, gently teases out long strips of cinnamon to dry. "There is a lot of cinnamon to harvest, not just here but in other towns," said Sumathipala, who has been at his craft for more than 40 years, having learnt the trade from his father.

Cinnamon trails across Sri Lanka, the world's leading exporter of pure cinnamon, attest to this ample supply. But this abundance exposes a troubling picture for the South Asian island: an inability to harvest it all. Currently, Sri Lanka has an estimated 30,000 peelers to harvest 33,000 hectares of the spice -- but 50,000 would be needed to reap the entire crop during its two monsoon seasons, the ideal damp conditions for peeling. Research by the Institute of Policy Studies, a Colombo-based think tank, has teased out two problems that keep new crops of peelers at bay: a social stigma that continues to stain the labor force in status-conscious Sri Lankan society, and the growing diversity of the labor market, which is tempting away young workers from the traditional cinnamon-peeling families that hail from the country's southern coastal belt. "Peelers need social recognition if they are to stay on, because the whole industry depends on them," said Dilani Hirimuthugodage, co-author of an IPS study on the cinnamon trade.

Sumathipala's rough, cinnamon coated fingers explain why the peelers are indispensable. Years of practice lie behind his ability to produce the cinnamon quill, cigar-shaped and stuffed with smaller strands of the spice. The quill marks out "Ceylon cinnamon," as the island's produce is branded in world markets, in a reference to its earlier name. Industry insiders describe the peelers as an essential element in Ceylon cinnamon's pre-eminence over a cheaper global rival called "cassia cinnamon," which is grown in India, Southeast Asia and China.

"Our peelers give us an edge over other countries in the cinnamon trade," Azid bin Rafy Ismail, a cinnamon grower in Negombo, said during a walk through his farm. "You can plant and grow cinnamon anywhere that has our climate, but that matters little, since they do not have our peelers, who have learnt their art through generations, to produce the quills."

Sri Lanka's peeler shortfall coincides with a propitious time for the local cinnamon trade. The global price for the commodity has steadily increased since 2004, rising from $4 to $12 a kilo. Sri Lanka exported 13,000 tons of cinnamon valued at $159.07 million in 2016, according to the National Chamber of Exporters of Sri Lanka, a trade body. Cinnamon export earnings amounted to $132.28 million in 2014.

The favorable global price for cinnamon, which accounts for more than half the island's spice export earnings, is driven by demand from Mexico, Peru, Colombia and the United States, the top importers of Ceylon cinnamon. The Mexican market demands five-inch cinnamon quills, said Nalin Anura De Silva, director of G.D. De Silva Sons, a cinnamon exporter in the southern coastal town of Ahungalla. "We trade mainly with South America. They like our pure cinnamon," he said. 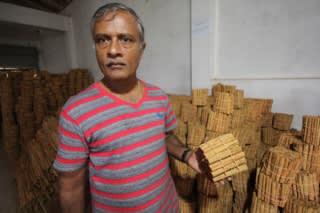 Nalin Anura De Silva holds up a bundle of 5-inch cinnamon quills for export to Mexico. (Photo by Marwaan Macan-Markar)

Not surprisingly, the whiff of profit that cinnamon offers has resulted in the spread of cinnamon farms. It has also encouraged farmers who formerly grew other crops to try their hands at growing the fragrant spice. Consequently, state employed agriculture extension officers in Negombo have their work cut out -- providing cinnamon seedlings and advice to the new growers. "Word has spread about good cinnamon prices, and more people in Negombo want to grow it," said Madhushika Hansanee, an agriculture officer, who dispenses advice every Wednesday. "We gave free cinnamon seedlings till 2015, but last year we introduced a 50% subsidy for the seedlings."

Sri Lanka, which exports 85% of its cinnamon harvest, has witnessed a steady rise in its annual output, from 15,900 tons in 2006 to 17,707 tons in 2015. Nearly 80% of the producers are small farmers strung along the western and southern coastal belts, which have long produced the spice, which is indigenous to the island. Stories are still told in some corners of southern Sri Lanka of the role played by cinnamon in attracting Portuguese colonists 1505. The Portuguese were followed by Dutch and British colonial administrations.

The cinnamon farms spread across the southern coastal belt are a mark of the growers' resilience, too. Many of the farms were flattened by the 2004 tsunami, which killed 31,000 people across Sri Lanka and damaged large swathes of its coastal agriculture. The sector is now expected to grow by 5% annually, according to local growers, who had to wait four years after replanting to enjoy profitable harvests. Yet the peelers required to hit higher production targets remain lacking.

Sarada De Silva, chairman of the Cinnamon Training Academy, is crafting one remedy. Since January, the academy has begun training locals in an attempt to increase the stock of new peelers, hoping to overcome the social stigma that has been the bane of the sector. "There is an interest in the academy because our training is seen positively," De Silva said.

He admited that the academy's efforts will take time to bear fruit. But that problem has not troubled the Sri Lankan government, which is in a rush to expand the national income. In March, it announced an ambitious plan to double the island's cinnamon exports by 2020. Daya Gamage, the Minister of Primary Industries, is eyeing a record $300 million in cinnamon export earnings by that year.

"Who is going to peel?" asked Sumathipala, more grounded in the production chain of the Sri Lankan spice than the minister. "Even my son doesn't like to be a peeler," he said, wiping sweat from his forehead with the back of his hand.