Tanoesoedibjo claims allegations against him are politically motivated

JAKARTA -- Hary Tanoesoedibjo has built a sprawling media conglomerate, partnered with U.S. President Donald Trump, and hinted at running for the presidency himself in Indonesia's 2019 election.

But in recent weeks, Tanoesoedibjo has been forced to defend himself against a string of allegations of intimidation and corruption. He claims the accusations are politically motivated, and continues to run his business as usual. On Friday, his property development company MNC Land announced that American golfer Phil Mickelson will redesign a golf course in Bali as part of a Trump-branded luxury resort.

But lingering legal risks may hamper his ambitions in both business and politics. Tanoesoedibjo spent eight hours at the prosecutor's office in Jakarta on Thursday, answering questions about his involvement in Mobile-8 Telecom, a telecommunications company in which his investment vehicles once held a stake. Prosecutors are investigating allegations of corruption linked to tax refunds that Mobile-8 received in 2009.

"This case is the domain of taxation, not the authority of the prosecutor," Tanoesoedibjo told reporters after the examination. His lawyer, Hotman Paris Hutapea, said the investigation intensified after the Jakarta governorship election in April, during which Tanoesoedibjo supported a candidate backed by the opposition to Indonesia's President Joko Widodo. "Why is the case suddenly open again after the Jakarta elections?" Hotman said.

Separately, the police named Tanoesoedibjo over alleged intimidation in a case involving text messages he sent to a prosecutor handling the investigations into Mobile-8. The immigration office on Thursday said they had imposed a six-month overseas travel ban on him in relation to the case, based on a police request. Tanoesoedibjo has confirmed that he sent the text -- in which he writes that he will clean up corruption "if I am the leader of this country." But he denies that it was meant to intimidate.

Tanoesoedibjo, a former stock trader, built a media empire by snapping up television networks owned by family members of late President Suharto after the regime collapsed in the wake of the 1997-98 financial crisis. His flagship media company Media Nusantara Citra runs three free-to-air national television networks that command some 40% of prime-time audience share. He has expanded into property and in 2015 partnered with Trump to develop luxury resorts in Indonesia -- a move that boosted his international profile after Trump won the U.S. presidential election. 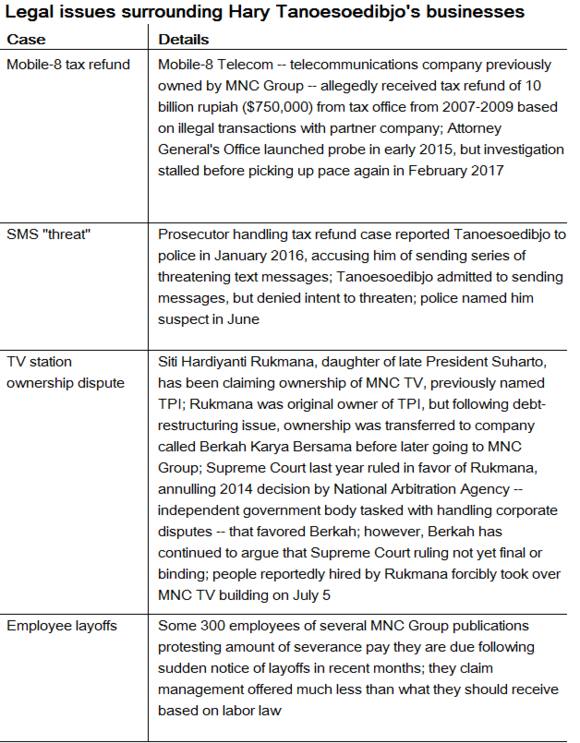 Business success laid the ground for Tanoesoedibjo's foray into politics. He chairs his own political party and supported President Widodo's rival during the 2014 election. While Widodo won the presidency, Tanoesoedibjo scored a victory in April when he backed the winning candidate in the Jakarta governorship race, who defeated a key Widodo ally. While most political analysts see Tanoesoedibjo's chances of becoming president as slim, he is likely to play a major role in the financing and media campaigns in the 2019 election.

The investigations surrounding Tanoesoedibjo, who has held a tight grip on his businesses, are creating uncertainty over MNC's future. MNC and other businesses under Tanoesoedibjo's control are currently negotiating a debt refinancing with the aim of reducing interest payments and exposure to swings in foreign exchange rates.

Earlier this week, Suharto's daughter Siti Hardiyanti Rukmana, who claims ownership rights to one of MNC's TV stations, reportedly hired people to forcibly take over one of the buildings. The move "is taking advantage of the current momentum against him," said an analyst at a local brokerage.

Analysts have already raised concerns over MNC's ability to defend its market share after a rival TV operator acquired a production house that previously made some of the most popular soap operas for MNC. MNC chief executive David Fernando Audy brushed off such concerns in June, pointing to the strong ratings generated by dramas produced by its internal production house, MNC Pictures.

"We prioritize in-house production and no longer depend on third parties," he said. "And it turns out that MNC Pictures shows much better performance."

Shares of MNC have been almost flat since the end of 2016, while Indonesia's benchmark stock index has gained 10%.