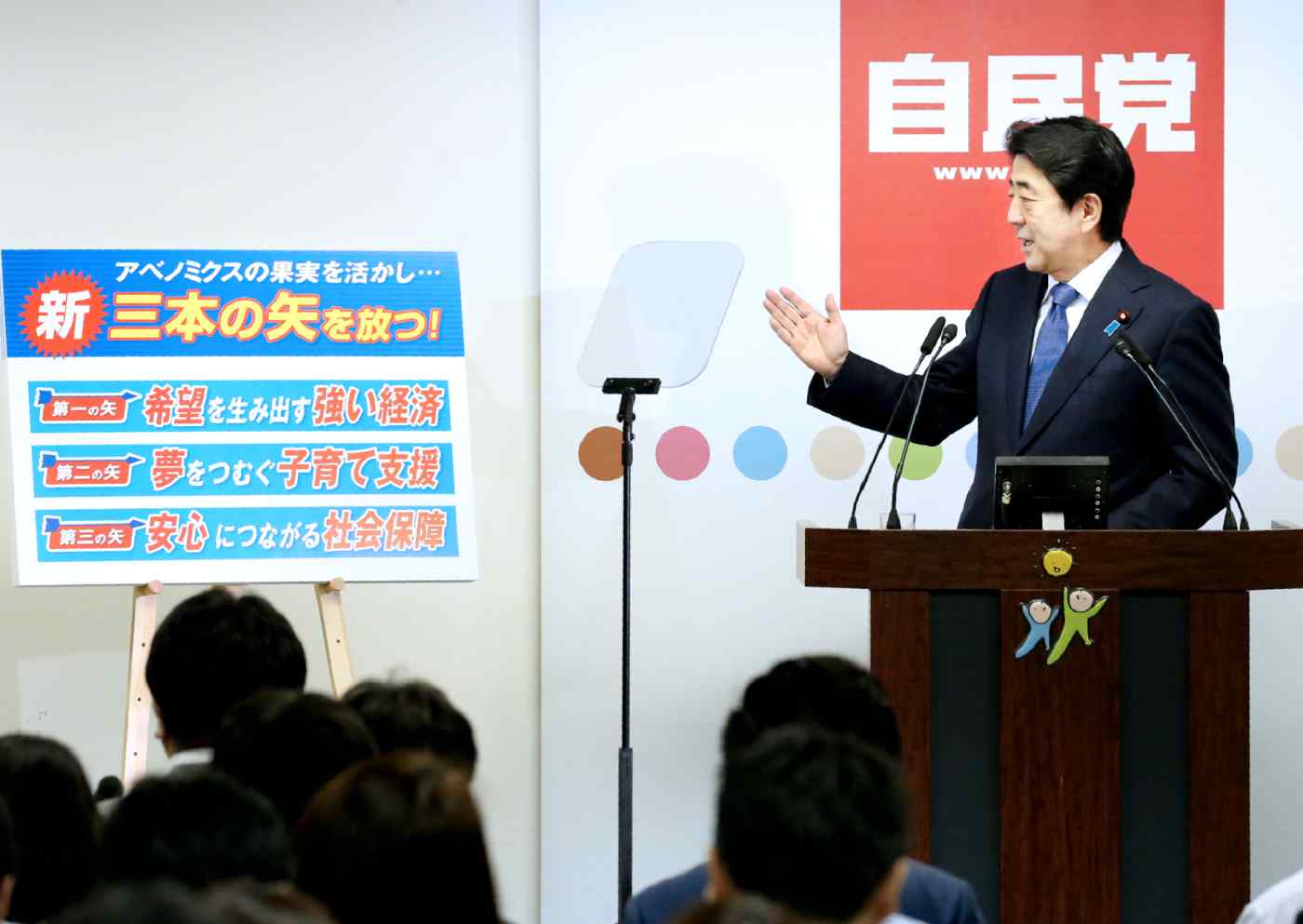 TOKYO -- Prime Minister Shinzo Abe is trying to reorient his government's priorities from national security back to the economy ahead of next summer's upper house election. But his aspirational next stage of Abenomics raises some practical questions.

The three new "arrows" that he announced Thursday aim for a stronger economy, greater support for families and more solid social security. He described them in terms of "hope," "dreams" and "peace of mind."

Abe succeeded Saturday in passing controversial national security legislation during the current Diet session, but he lost public support in the process. The cabinet's approval rating has fallen 6 percentage points from the end of August to 40%, the latest Nikkei/TV Tokyo poll finds. The prime minister appears to be trying to regain support by redoubling his government's efforts on the economy.

At Thursday's news conference, Abe outlined a grand vision of achieving Japan's "biggest economy" and "most affluent way of life" in the postwar era. He set a goal of reaching 600 trillion yen ($5 trillion) in gross domestic product. This figure appears in a scenario issued by the government in the context of improving fiscal health. The Cabinet Office projects GDP reaching 594 trillion yen in fiscal 2020 and 616 trillion yen the following year, assuming a real economic growth rate of at least 2%.

But Abenomics has yet to show it can produce the broad-based virtuous cycle of rising corporate earnings, wage increases and consumer spending growth that the prime minister envisions. Under his watch, real GDP growth of 2.1% in fiscal 2013 gave way to a 0.9% contraction the following year owing to a consumption tax increase. The economy is seen expanding at a modest 1.5% this fiscal year.

For his second new arrow, Abe said his government would clear wait lists for day care and make preschool free. He also mentioned aid for three-generation households and families with many kids as part of an effort "to build a society friendly to raising a family."

These initiatives require continuous funding, but Abe did not explain where the money would come from. Abe's talk of raising the total fertility rate from 1.4 to 1.8 will ring hollow if the government cannot figure out how to pay for more generous child care assistance.

His goal of ensuring no one has to quit a job to care for an infirm family member also invites scrutiny. More than 6 million elderly Japanese require nursing care or daily assistance, and up to 520,000 are waiting to enter special nursing homes with low out-of-pocket costs. Abe said his government would work to provide care facilities. But this, too, costs money.

Having more visiting nurses to provide in-home care would help, but the welfare ministry predicts a shortage of 380,000 caregivers in 2025. To help people balance work and the need to care for loved ones, the government would need to do more to encourage innovation in work patterns, such as jobs that convey the benefits of permanent positions but are limited to certain hours or places.

Many market participants still hope for the third of Abenomics' first three arrows: deregulation and other reforms to unleash growth. But such policies are curiously absent from the new additions to the quiver. Given the hand-in-glove relationship between the ruling Liberal Democratic Party and special-interest lobbies in the upper house -- candidates backed by industry associations frequently run on the LDP's proportional representation ticket -- some suspect Abe's motives for relaunching his economic agenda.