KUALA LUMPUR -- Robust economic growth has long played a key role in smoothing over tensions between Malaysia's different ethnic groups. But with that growth sputtering, resentment over the government's preferential treatment of ethnic Malays may soon boil over.

The rift between Chinese Malaysians, who account for less than 30% of the country's population, and the ethnic Malay majority of 60% deepened sharply after the general election last May, which saw the government of Prime Minister Najib Razak declare victory. The slowing economy has deepened the underlying mistrust between these two groups, and the premier, looking to solidify his support base among Malay voters, appears to be turning a blind eye to the escalating tensions. 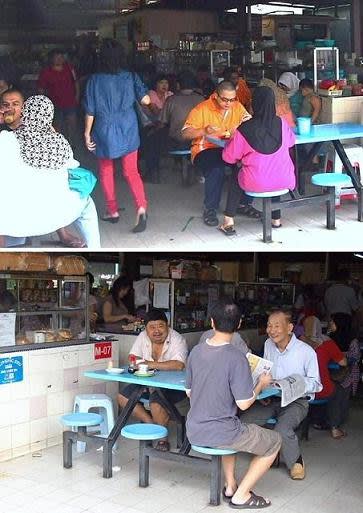 In Kuala Lumpur, there is a clear divide between Malays and ethnic Chinese people. Malays only go eat at food courts run by Malay people, top, while Chinese Malaysians gather only at Chinese shops, bottom.

In the capital Kuala Lumpur stands a poignant sign of Malaysia's division. Two food courts, located barely 20 meters away from each other in the same shopping area, cater to different ethnic groups. In one, there are only food stalls run by Malays for their Malay customers. In another, all the shops are operated by ethnic Chinese serving food for Chinese-Malaysian diners.

Most Malay people are Muslims and cannot eat Chinese food, much of which uses pork, for religious reasons. And though Chinese-Malaysians do not have such religious dietary restrictions, many of them shun Malay-run shops because of rising resentment over the country's race-preferential economic policy of Bumiputra, which gives preferential treatment to Malaysia's ethnic majority.

Bumiputra is a Malay term that means "son of the land," and the policy has clear Malay-run food courts, for example, are administered by local municipalities and their monthly rents are held at 30 ringgit (about $8.96). By contrast, ethnic-Chinese food courts are privately run and their rents stand at around 800 ringgit, roughly 25 times higher. City-administered spaces openly favor Malay restaurant owners, and Chinese-Malaysians have grown increasingly frustrated about such an unfair treatment.

The government introduced the Bumiputra policy in 1971 to raise the overall income levels of ethnic Malays, whose incomes were lower than those of ethnic Chinese. The policy also provides a legal basis for giving preference to ethnic Malays in education and employment, among other fields. The income gap has narrowed between the two ethnic groups over the years, but Chinese Malaysians have suffered numerous consequences: They are granted only limited slots for university entrance and are rarely promoted to executive posts at government offices and state-affiliated companies.

Even so, ethnic Chinese people have refrained from protesting explicitly against the government mainly due to the country's steady economic growth. Malaysia started courting foreign investments in the 1980s, and the government widely shared the fruits of economic growth to keep dissatisfaction in check. On the surface, the two groups have managed to live side by side.

But rising wages have meant foreign investment has started tapering off in recent years. With the once-uniting force of economic growth losing steam, the ethnic Chinese population has begun making its grievances heard.

The general election last spring proved to be a turning point for Malaysian politics. The ruling coalition, Nasional Front (BN), managed to win a majority of seats in the lower house of parliament, but it gained just 47% of the popular vote compared with the opposition Pakatan Rakyat coalition's 51%. Political observers cite ethnic Chinese voters' switch to the opposition camp from the ruling bloc as the main reason for the results.

For years, Prime Minister Najib had been pushing to review the Bumiputra policy. But with the election indicating that he is unlikely to secure support from ethnic Chinese voters, he has shifted back to a more pro-ethnic Malay stance. Last autumn, he announced a decision to provide low-priced housing only for ethnic Malays.

Local Malay-language newspapers have run opinion pieces criticizing Chinese Malaysians who joined the opposition camp as "ungrateful." As the state has strict control of the media, it is widely assumed that the government condones such verbal attacks.

Its own worst enemy

The country's return to a policy of preferential treatment for ethnic Malays is undermining its economy on two fronts. First, the move is fueling an outflow of Chinese Malaysians to overseas. One Chinese student declined a government scholarship and is now studying at a university in neighboring Singapore because, she says, her opportunities are limited in her home country. The World Bank warned in a recent report that Malaysia is losing highly skilled citizens to overseas institutions and many may not return.

Secondly, ethnic Malay citizens are becoming more inward-looking. Many of them work for companies affiliated with the government and enjoy generous protection, such as subsidies. Malaysia has joined the Trans-Pacific Partnership free trade negotiations, but is clashing with the U.S., the leading member, over the reform of Malaysia's state-run companies. Malay companies, which form an important support base for the government, are vehemently opposed to the U.S. demands.

Malaysia aims to join the ranks of industrialized nations by 2020 and is rushing to nurture industries that can produce highly value-added goods and services. But the country will find it very difficult to stem the brain drain and stop further delays in opening up its market as long as it keeps the Bumiputra policy in place.

The country's former Prime Minister Mahathir bin Mohamad, in forging ahead with the policy, once described the economic weakness of the ethnic Malay majority as the "Malay dilemma."

However, the country is now facing an even more troubling dilemma, one with no easy fix in sight.