COLOMBO -- In an apartment block facing Colombo's coast, members of the large Maldivian diaspora in the Sri Lankan capital are discussing economic developments at home. The latest topic: a decision by the government of President Abdulla Yameen to float the country's first sovereign bond, seeking to raise $200 million.

Commercial bankers in Sri Lanka, the Maldives' closest neighbor, are also tuning in for more details. "We still don't know the yield and the date of the issue," a senior commercial banker in Colombo said, asking not to be identified. All that is known is that the bond will have a maturity of five years and will be issued within March.

Moody's, a global credit ratings agency, has assigned a B2 rating with a "stable outlook" to the Maldivian bond. But the rating falls into the agency's "highly speculative category," and is labeled "subject to high credit risk."

The Maldivian economy has been driven by a huge expansion in tourism, Moody's noted, helping to boost per capita incomes to $15,000 a year in purchasing power parity terms -- the highest in South Asia -- and boosting government confidence in the bond's prospects. "We're really confident we would be able to get our targeted funds," Finance Minister Ahamed Munawwar told local media in February. "This would be a historic achievement for this sector."

Not everybody is cheering. The bond issue has prompted uncomfortable questions about the Maldivian economy from longtime observers, who point to the isolated tourist resorts among the 1,192 Maldivian islands in the Indian Ocean to drive home the point.

Each resort, built at costs ranging from $20 million to $100 million, attracts piles of dollars from foreign holidaymakers, but most of this cash never enters the Maldivian banking sector. All the materials needed to build and run the resorts have to be imported, so most building and running costs are spent outside the Maldives. Tourists often pay offshore in dollars, or book online, transferring money to foreign bank accounts. A financial analyst in Colombo shakes his head as he talks about the parallel economies in the Indian Ocean archipelago. "Technically, the Maldives can go bankrupt, if you look at the way economic data is calculated," he said, on condition of anonymity, as he weighed official numbers against the latest economic indicators on the ground in South Asia's smallest country, where 400,000 people inhabit 200 islands.

Other bankers and economists in the Colombo share similar views. "If you look at the numbers, the Maldivian economy looks like it can go off a cliff at times," one economist said, also on condition of anonymity. "But that doesn't factor the dollars circulating outside the formal banking system."

Events in the last few months have fueled worries about the $3.27 billion economy, where the dollar is used for daily commerce as much as the rufiyaa, the local currency. The Maldives Monetary Authority, the central bank, triggered concerns by buying a $140 million bond from the state-owned airport company.

The company needed dollars to pay compensation to GMR, an Indian infrastructure company, whose contract to develop and manage the country's main airport was abruptly terminated in 2014. The saga, which will ultimately cost the Maldivian state $271 million in damages, has severely damaged the islands' reputation for investor protection.

The impression of an increasingly troubled economy heightened in mid-November, when locals began queuing outside commercial banks in Male, the capital, as the country was hit by a dollar shortage. The central bank was forced to step in on Nov. 20, taking over dollar sales from the commercial banks.

The scene added to alarm about the country's foreign reserves, which had amounted to $187 million at the end of October, before the GMR settlement. Critics have assailed the government for reducing the reserves to an all-time low of $47 million.

Reports that the government was under financial strain continued through January, when it had to delay paying the salaries of some civil servants -- providing powerful ammunition to former President Mohamed Nasheed, the country's first democratically elected leader, who is living in exile. "President Yameen is isolated, and he is running out of money," Nasheed told journalists in Colombo during a brief stopover. "He cannot pay the civil servants."

The increasingly autocratic Yameen, who is filling Maldivian prisons with one-time allies (including his former vice president) and political adversaries, appears to be spoiling for a fight. "Those who shiver over the high debt we have to shoulder can keep shivering," the 57-year-old leader said after inaugurating a clean water project on Meemu atoll. "We are going forward with this debt because we do not shiver." 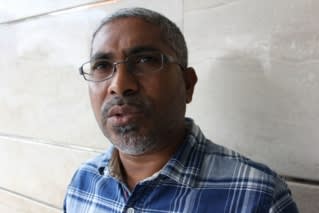 The country also endured a slowdown in economic growth in 2015, when GDP growth fell to 1.9%, from 6.5% the year before, according to the World Bank. The Yameen administration paints a rosier picture of the economy, claiming it grew by 4.8% in 2015. A government minister said that the World Bank was "jealous" of Yameen's development achievements.

However, the International Monetary Fund has also expressed concern about the Maldives' high public debt levels. "[Debt is already high] following persistent fiscal problems, and while investment programs could boost growth in the long run, it will substantially add to fiscal and external risks in the near future," the IMF said in a review of the Maldivian economy last year.

Yameen is trying to boost his political fortunes with three large Chinese-funded infrastructure projects that have made construction and public infrastructure spending the main drivers of the economy, which grew by 3.6% in 2016. The projects include the airport expansion scheme, now being handled by a Chinese company; a $120 million bridge being built to connect Male to a separate island where the airport is located; and a port enlargement on Laamu atoll. China accounts for 70% of the Maldives' foreign debt, estimated at $741.6 million.

Observers say that Yameen has got his way because of a political culture that rewards bad governance. "There is a business-political-bureaucratic nexus in the Maldives that finds bad governance -- or misgovernance -- profitable," said Imtiaz Ahmed, executive director of the Regional Center for Strategic Studies, an independent think tank in Colombo. "The absence of a strong civil society has added to this climate, but that makes the political structures very unstable."

Speaking out against the culture of corruption has a price. Niyaz Ibrahim, a former Maldivian auditor general, fled the country in late 2016 following a series of death threats. His troubles began after he stated in his 2014 auditor general's report that prominent members of Yameen's regime and their cronies had profited from $300 million in kickbacks.

"Now you cannot trust the official statistics of the government, because the numbers are made public to give a positive image of the president," Ibrahim told the Nikkei Asian Review in Colombo. "This is what is worrying about the sovereign bond."

Against this background, convincing foreign investors to snap up this first-time bond will be a test of the acceptability of Maldivian economic data. The Yameen regime's representatives may find that roadshows planned to attract investors turn out to be opportunities for critics to ask awkward questions.