How developing countries can deal with rising health care costs

The world's aging population is a twofold phenomenon. It is a reflection of longer life expectancies and a sharp decline in fertility. Life expectancy has risen significantly worldwide over the last few decades.

In Asia, average life expectancy was only 40 years in 1950; by 2014, it had nearly doubled to 72 years. As people live longer, they require more savings to support a longer period in retirement.

In addition, as reported in our previous study[1], elderly people need significantly more health care than young people, based on data from Japan, Taiwan, Thailand and the U.S. collected from 2003 to 2007.

The annual health care spending of people aged 64 and higher is two to six times higher, on average, than that of younger people. The rapid aging of national populations indicates that significant increases in total health care costs and a rising financial burden on the public health system cannot be avoided. 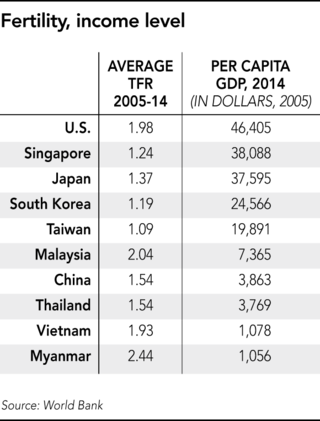 Contrary to the common perception that low fertility is only an issue in high-income countries such as Japan, it is common in countries with much lower income levels in Asia. According to figures from the World Bank, Thailand's TFR during the period from 2005 to 2014 was 1.54; Vietnam's was 1.93. That was not far above Japan's 1.37 and lower than the 1.98 recorded by the U.S.

The table shows the average TFR and corresponding income levels, measured in 2014 per capita gross domestic product, measured in constant 2005 dollars, in several Asian economies. The U.S. data is used for comparison.

Although the Asian economies sampled vary greatly in GDP per capita, from $1,000 to $50,000, their fertility rates, with the exception of Myanmar, have been below 2.1 for at least 10 years.

Squeezed at both ends

Demographers and economists have long recognized that economic development is generally accompanied by a decline in fertility.

Recent studies have used economic growth after World War II in South Korea and Taiwan as examples, and suggested that the "quantity-quality trade-off" idea developed by Gary Becker in 1960, is a useful way of understanding this pattern: Instead of having more children, or quantity, parents invest more in each child's education, opting for "quality."[2]

However, lower income Asian countries, such as Vietnam and Myanmar, also have very low fertility at present. Figure 2 shows fertility rates in several lower income countries, with Japan and the U.S. used for comparison. Fertility rates in the developing countries declined sharply, from 6 in 1970 to around 2 in the 1990s, even without strict population control measures such as China's one-child policy.

The sharp fertility decline makes the problem of an aging population more acute, and implies that the working-age population will shrink rapidly as the elderly population swells.

As Mason and NTA members ("Is low fertility really a problem? Population aging, dependency, and consumption" Ronald Lee of UC Berkeley, Andrew Mason of the University of Hawaii, and members of the NTA Network, 2014, Science) have mentioned, aging has become a major concern in most countries -- a remarkable reversal from decades of concern about the economic and environmental consequences of high fertility and rapid population growth.

Developing countries face an additional challenge: large informal sectors that on average account for more than 50% of the workforce. This differs from developed economies, and further constrains governments' ability to meet rising health care costs through higher tax collection while maintaining fiscal balance. 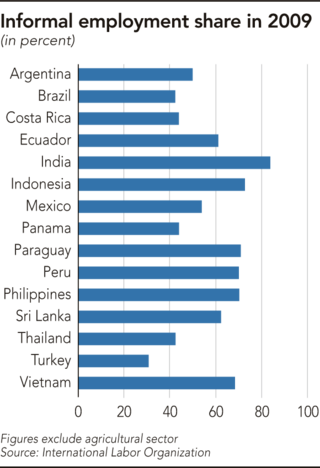 Bar chart shows the estimated ratio of informal employment to total employment in the nonagricultural sector in selected emerging economies, using data from the International Labor Organization. Turkey, which has the highest income among the developing countries selected, is shown as a lower bound, at 30%. Several countries have informal employment ratios exceeding 70%. The ratio would be still higher -- generally over 50% -- if the agricultural sector were included.

Our current study[3] investigates the potential impacts of aging on developing economies and discusses financing schemes to meet the cost associated with aging and optimal population policy.[4]

We develop an economic model to provide a quantitative analysis. We use Thailand as a representative for our target developing economy, and set up the model to capture some of its main features. Thailand has a large informal sector -- 60% of the workforce -- and a low total fertility rate of 1.5. Seventy percent of unskilled workers -- those with high school educations or less -- work in the informal sector.

We create a model economy, incorporating forecast increases in life expectancy and health care demand. The results are given below.

In an emerging economy like Thailand, if life expectancy rises to 80 years, as forecast, by 2055, up 74 years at present, and consumption taxes -- including value-added taxes, duties and other indirect taxes -- are used to balance the budget, health care spending as a share of GDP is expected to increase from the current 5.5% to 12%. That is close to rich-country average and would require the tax rate to rise by 10 percentage points.

We also find that labor and capital income taxes are not a feasible means of covering the rising health care costs of an aging population, because such taxes would cause economic resources to shift to the informal sector to escape the tax net. This reallocation of resources also hurts the total productivity of the economy and reduces investment in education, because human capital is undervalued in the informal sector. Thus, a consumption tax is only feasible means of financing significant health care spending.

At the same time, we find that aging is not an entirely bad thing for developing economies. Aging increases returns to education, as people try to earn and save more for old age. This raises the human capital stock, which in turn increases the capacity of the formal sector and the aggregate income level.

We also find that policies to increase fertility through child allowances and child care subsidies harms social welfare.  Because this type of policy distorts the relative costs of "quantity" versus "quality" of children, it raises fertility but dampens the incentive to invest in educating children.

This, in turn, increases the size of the labor force while lowering its quality; more of these workers end up in the informal sector because low-income earners have an incentive to have more children in response to subsidies, while high-income families' fertility choices are less sensitive to the subsidies. Such policies are therefore likely to hurt the long-run economic performance of developing countries, which in general have lower human capital development and larger informal economies than their richer counterparts.

Our experiments in the model economy suggest that instead, policies that lower the cost of educating children can improve human capital, reduce the size of the informal sector and increase economic output. Under an optimal policy, this could reduce the additional taxes required to finance higher health care spending by 5 percentage points.

In sum, an aging population is not entirely negative, and can be an opportunity for developing economies to develop their human capital and lift economic growth. This may also offset the additional fiscal burden caused by aging, if the population policy is well designed.

[4] An international research project among researchers in Japan (GRIPS), Thailand (Bank of Thailand) and Taiwan (Academia Sinica). The preliminary results were recently presented at the Econometric Society 2016 Asia Meeting in Kyoto.