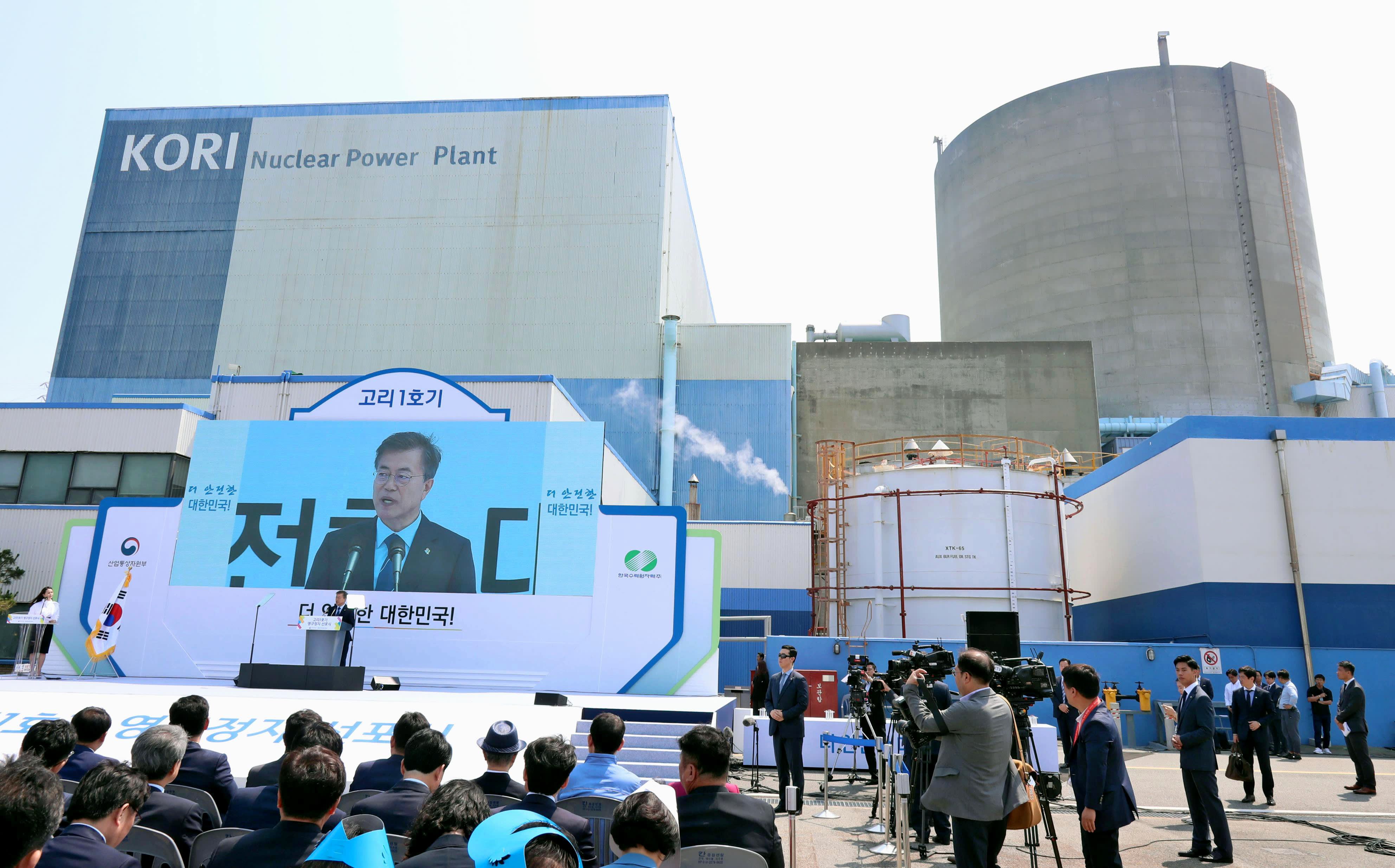 SEOUL -- South Korean President Moon Jae-in is moving quickly to deliver on his promise of sweeping economic reforms, roiling the energy and other sectors amid concerns over cost increases and a big hit to earnings.

Groups including the labor union of Korea Hydro & Nuclear Power on Aug. 8 filed for an injunction to suspend a public review process initiated by Moon to achieve his signature pledge of weaning the country off nuclear energy. Moon created a review commission with the aim of reaching a public consensus in October.

The president in June called for the cancellation of all construction plans for nuclear power plants. The question now is what to do with a project that was already underway, construction of the Shin Kori Nos. 5 and 6 reactors at a plant outside Busan. The labor union's legal action involves those two units.

The general trend around the world is to phase out nuclear energy in favor of renewable energy. But the sudden shift in policy in Seoul has left South Korean industry blindsided.

The government claims that power demand in South Korea will decline by the equivalent of capacity at eight nuclear reactors by 2030, due to slow economic growth, arguing that electricity prices will not rise much even if the country moves to jettison atomic power.

But Kim Jwa-kwan, a professor at Catholic University of Pusan, who headed Moon's energy policy team during his presidential campaign, said energy prices would rise 25% by 2030 if the country makes good on its promise to shut down nuclear power.

South Korea's biggest electricity consumer is Hyundai Steel, which pays 1.1 trillion won ($963 million) in electricity bills each year. Higher electricity charges would raise costs and squeeze profit, and there is nothing companies can do about it, according to an industry insider.

A survey of 152 companies by the Munhwa Ilbo newspaper shows a 10% rise in electricity prices translating to an operating profit decline of 30% on average.

Moon's campaign to achieve economic growth through wage increases is also weighing on the corporate sector.

Time-honored textile company Chonbang is now considering shutting down three of six plants and shedding around 600 workers as early as next year. The government's decision to raise the minimum wage by 16.4% next year -- part of efforts to eventually raise the rate to 10,000 won per hour -- may leave the company little choice.

The textile industry in South Korea has been suffering in the face of ascendant emerging economies that have an army of low-wage workers. Because the sector can take on a large number of low-skilled workers, the government has provided incentives to encourage the industry to keep operations at home.

Chonbang Chairman Cho Kyoo-ok lamented that the company has invested a great deal in South Korea by heeding to the government's plea, only to find itself on the losing end of the latest reforms.

Small and midsize enterprises would suffer even more under the minimum-wage hikes. Employment will fall actually because companies will slash hiring and small companies will go bankrupt, said professor Nam Seong-il of Sogang University in Seoul.

The Moon government is thoroughly on the side of most citizens because he was elected on the promise of correcting the country's vast socioeconomic disparities and various societal ills that have been allowed to fester for years. The government also announced a sharp increase in corporate taxes Aug. 2.

Fully aware that the public lays the blame for many of the country's problems on powerful companies, executives have remained silent.

So far Moon's reforms are all sticks and no carrots for companies. Without incentives, businesses will simply pull up stakes and move vital operations elsewhere.