MANILA -- Years of strong economic growth have markedly lifted living standards in the Philippines, but abject poverty remains a bitter fact of life for many people in this Southeast Asian country.

Smokey Mountain is the most famous of several garbage dumps in the vast capital. And even though it has been closed for two decades, it remains a notorious symbol of poverty and urban misery. The trash heap provided livelihoods for thousands of people, but the problems that created it remain unsolved.

In Tondo, a district along Manila Bay, there is a hill located near a group of high-rise buildings.

Although there is a slum next door, there are few signs indicating the hill was once a mountain of garbage. A bevy of illegally occupied shanties is almost the only legacy of its filthy past.

Smokey Mountain was the spilled guts of a sprawling and growing city. The detritus began rising around 1960 and piled up over the years, when tons of garbage from the capital was dumped at the site. The heap was so named because flammable materials in the waste spontaneously caught fire, producing plumes of smoke.

Scavengers eked out a precarious living sifting through the garbage, collecting recyclable materials such as iron scraps and plastics and selling them to junk dealers. Some even fed themselves on the scraps of food they found.

As the dump became a dark metaphor for poverty, the government closed Smokey Mountain in the late 1990s.

But that did not help the impoverished. With little to no education or professional skills, they had no choice but to continue scavenging for garbage to put food in their mouths.

Smokey Mountain may be gone, but similar scenes now play out daily at a dumpsite in Payatas, Quezon City, in Metro Manila. On one recent day, as a garbage truck dumped its load at the top of a 30-meter-high mass of rubbish, people rushed to sift through it and find anything of value.

Every single day, some 500 dump trucks just like it carry 1,200 tons of garbage from the city to the site.

Payatas has been in use since the 1970s, and it has grown fast in recent years as the country's economy has expanded. It has been dubbed the second Smokey Mountain, and some scavengers from Tondo even migrated here. 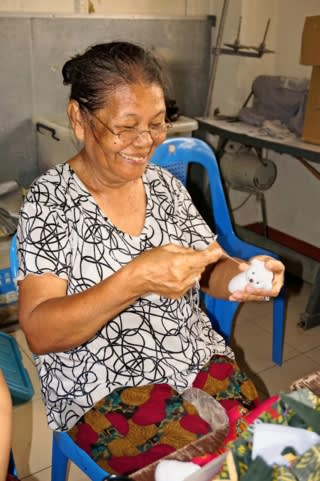 A woman makes stuffed animals at a workshop near the huge dumpsite in Payatas, Quezon City, in the Philippines. (Photo by Jun Endo)

Rows of stalls housing shops that purchase iron, plastic and pet bottles retrieved from the site surround the trash heap.

In fact, it is actually a town built around the mountain of garbage. About 10,000 people live here, and schools and other public facilities exist just like anywhere else.

The municipal government strictly restricts access to the dumpsite. A license is required to work as a scavenger, and currently 1,800 people possess that permit. Children under 15 are banned from entering the site.

Only 400-500 scavengers are allowed to work at the same time. There are two shifts: one in the morning and another in the afternoon. Scavengers earn an average 100 pesos to 300 pesos ($1.99 to $5.96) per day, which is below the legal minimum wage in Manila.

Some scavenge only when they cannot find other work, such as in the construction industry.

The Quezon government tightened control of the dump following a disaster in 2000.

The mountain of waste collapsed, triggering a landslide measuring 30 meters high and 100 meters wide. More than 200 people were killed. With dozens still missing, the death toll is believed to be over 300. 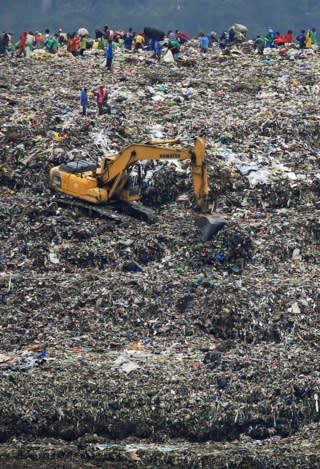 People scavenge at the Payatas dumpsite in Manila on Feb. 3. (Photo by Akira Kodaka)

The collapsed section is now a mound covered with grass and flowers.

In order to prevent another tragedy, the municipal government places a large amount of dirt over the mountain of refuse every day to solidify the mass.

Despite the safety measures taken by the local government, there is no disguising the fact that this is a garbage dump and that the work is filthy and degrading.

In the dry season, scavengers work in the scorching heat, while in the rainy season, they endure the putrid odor.

But many people are stuck here, unable to find another job, according to Jameel Jaymalin, the manager of the dumpsite. In an ideal world nobody would have to work here, but the grim reality is that many of them cannot even afford clean clothes for job hunting, he said.

There have been, however, some encouraging steps taken to alleviate the hardships of living and working at the site.

After the deadly landslide, various government and nongovernmental organizations both at home and abroad started providing aid to the garbage diggers.

One of them is, the International Children's Action Network (Ican), a nonprofit organization based in Nagoya,Aichi prefecture in central Japan.

Ican has set up a workshop near the site that helps residents become financially independent. Here, women skillfully stitch stuffed animals in hopes of selling enough of them to get by.

Vivian, a 60-year-old woman, worked as a scavenger because her husband's income was insufficient to feed their family. She used to start digging through the garbage before dawn, working until she could no longer carry on, she said.

After the disaster, Vina, 51, stopped scavenging and started earning her living by selling the stuffed animals she made by hand.

Initially, retailers often rejected her products, saying they would not sell well. But she has since acquired greater skill and now enjoys developing and making new toys. Her products are sold at bazaars in the Philippines and online in Japan.

A clinic that offers low-cost health care services was established in the neighborhood with financial support. But now, it operates without outside support because local residents work as volunteers.

Mana Abe, an Ican staffer, said the mindset of local residents has changed. "They now try to support themselves and live without receiving outside aid as much as possible," she said.

The Payatas dumpsite continues to grow and is nearing houses in the area. It is expected to reach its limit in a few years.

In an effort to reduce the amount of garbage dumped here, the municipal government plans to introduce a system to burn waste and generate electricity that will power local residences.

In the meantime, the Payatas community will continue to scrape by, hoping that the country's economic growth will someday reach them, too.