YANGON -- Myanmar's de facto leader Aung San Suu Kyi and her National League for Democracy government are gearing up for their first electoral test since taking power last year, with April 1 by-elections looming for a small number of parliamentary seats.

"Many of the vacant seats are in the NLD's stronghold areas," noted Nay Yan Oo, a Myanmar analyst at the Center for Strategic and International Studies in Washington, D.C.

The seats being contested were vacated when their occupants were appointed to various roles in the NLD government. Regulations require that lawmakers who join the administration must give up their parliamentary seats. There are 18 seats at stake, with 95 candidates from 24 parties seeking the support of 2 million voters. "We are confident in these by-elections that the NLD will win," Nyan Win, a party spokesman, told the Nikkei Asian Review.

The voting, however, will take place against a backdrop of growing tensions between the civilian government and the powerful military. Despite a landslide victory for the NLD in late 2015, when it won 80% of available seats, the military still has an automatic allocation of a quarter of parliamentary seats, as well as control over three key security-related ministries and a veto over constitutional change.

Suu Kyi remains barred from the presidency by constitutional restrictions on Myanmar citizens with foreign family - her two sons by her late British husband do not hold Burmese citizenship. Even so, the NLD has toned down its pre-2015 calls to change the 2008 constitution to enable Suu Kyi to become president. She now holds instead the title of state counselor, similar to a prime minister in a semi-presidential system. The role essentially gives her control of the government, with President Htin Kyaw - a close confidant -- serving as a figurehead leader.

The most recent source of civilian-military tension has been over the military's so-called "clearance operations" against the Rohingya Muslim minority in Rakhine State in western Myanmar. The United Nations has claimed that the army's brutal campaign - aimed at Islamic insurgents who attacked police posts on Oct. 9 -- most likely amounts to "crimes against humanity." Following widespread charges of human rights abuses by the military and an exodus of more than 70,000 refugees to neighboring Bangladesh, the army recently indicated it had ceased its clearance operations. But top generals have indicated displeasure that Suu Kyi has failed to involve the National Defense and Security Council in discussing the Rakhine conflict and clashes with ethnic separatist groups along Myanmar's border with China. The military-dominated council was created by the 2008 constitution, drawn up under the earlier junta, and provides a venue for military and civilian leaders to discuss declaring a state of emergency -- a move that would hand total power back to the army.

"We have to separate out the Myanmar government and the military; Daw [an honorific] Suu and colleagues do not control the military at all," said Matthew Walton, senior research fellow in modern Burmese studies at St Antony's College, Oxford.

But Suu Kyi's government has been criticized overseas for largely refusing to acknowledge many of the disturbing accounts of army brutality given by Rohingya refugees. The NLD government has frequently issued denials of atrocities, although it recently expressed concern about reports of rapes and murders contained in a U.N. report, and promised to arrest soldiers if crimes against them could be proven.

"What the NLD government, which was elected partly on transparency and openness, has control over is its messaging," said Walton.

The Rohingya crisis, however, is unlikely to be an electoral issue. Suu Kyi has avoided taking a sympathetic view of the Rohingya, who are widely despised in Myanmar. "She is mostly concerned about domestic opinion," said Khin Zaw Win, director of the Tampadipa Institute, a Myanmar research group, noting that the NLD did not field a single Muslim candidate in the 2015 national elections.

Instead, economic issues are likely to dominate campaigning for the by-election. The government's record in handling vital economic issues has been widely criticized by both foreign and domestic analysts and business people, although it has had to face the formidable challenge of transforming a country that suffered under five decades of military rule which left tens of millions of people mired in rural poverty.

Myanmar's economic growth for fiscal year 2016, which ends March 31, will slow to around 6.3% from about 7.3% in fiscal year 2015, the final year of the government led by former President Thein Sein and the military-backed Union Solidarity and Development Party. Foreign direct investment is likely to fall short of the record $9.4 billion in fiscal year 2015, although it could rebound in the coming year. Either way, even Myanmar's lower growth rate in 2016/17 is the envy of most of Asia. "There is no recession," said Khin Zaw Win.

Uncertainties, however, cloud the NLD's outlook for the by-election. Will the absence of recession be enough for voters to support the government? Will voters see a chance to punish the NLD for perceived failings or administer a tactical shock to the system to spur the NLD to work harder? Or, given that NLD has served only one year, will voters show patience and stick by a venerated leader?

"The by-elections will be a good barometer," said Khin Zaw Win. "If you go back to 2012, she [Suu Kyi] won handsomely, but now the other parties will have ammunition."

Other parties are unlikely to block the NLD juggernaut. The previous governing party, the USDP, won 28% of all votes in the 2015 national election, but due to Myanmar's "first-past-the-post" system, its numbers in parliament fell from 388 to just 41. A proportional system would have reduced the NLD's dominance.

Which party is likely to benefit from any public dissatisfaction with the NLD? "The USDP is not popular, so it is a good opportunity for third parties," said Khin Zaw Win, referring to the USDP's closeness to the military. "I think it's too soon for the USDP to successfully make a comeback," said Nay Yan Oo.

Launching the party's by-election campaign, USDP leaders, most of them from the party's "old guard" in the days of quasi-civilian rule, promised to protect "race" and "territory," but skirted issues such as healthcare and employment, suggesting that they hope to contest the by-elections based on tribal rather than economic issues.

Among the non-aligned parties vying for seats, Khin Maung Swe, founder of the National Democratic Force, claimed the USDP "is not in a good position" while the NLD is vulnerable. "Some people in society are upset, land issues are not handled, the NLD government is not addressing [land] confiscation from the past, workers do not get the rights they have been demanding," he said.

The NDF was set up by disgruntled NLD members who formed a splinter group after Suu Kyi decided to boycott the 2010 national elections organized by the junta under dictator Than Shwe. After carving out an independent role through its handful of seats in the last parliament, the NDF was wiped out by the NLD in the November 2015 vote. The party is now hoping to mount a comeback in 2017, fielding five former lawmakers for the by-elections in constituencies in Yangon and Bago, northeast of the former capital.

The most serious potential challenger to the NLD, however, will not be able to run in the by-elections as it is not yet formally organized. The new group comprises leading members of the 88 Generation, the former students who spearheaded the 1988 mass demonstrations against military rule. Some of the now middle-aged former political prisoners aim to launch a party by the end of 2017.

Prominent members of the 88 group were spurned by the NLD ahead of the 2015 elections, including Ko Ko Gyi, the likely leader of the planned 88 Generation party. The new party would represent a generational shift from the NLD, most of whose leaders are in their 70s and 80s."They [the NLD] have old men in all the leading positions," said the NDF's Khin Maung Swe. 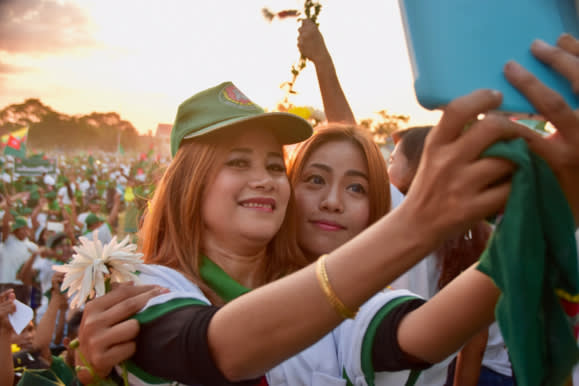 Supporters of the ousted USDP pictured during an election rally in Yangon ahead of the Nov. 8 2015 vote. (Photo by Simon Roughneen)

Nyan Win, a member of the aging NLD central committee, said that he did not think the 88 Generation, many of whom are household names, would succeed in party politics. "I don't believe they can attain the leadership role," he said. "They use this name but there is no evidence that they were the only 88 generation," he added.

Khin Maung Swe expressed similar doubts, saying that the best known 88 Generation member, Min Ko Naing, was not interested in politics and preferred to focus on social and cultural advocacy.

But many in Myanmar already welcome prospects of a new 88 Generation party, which is likely to be outspoken and could either compete against or partner with the NLD -- as when its leaders backed Suu Kyi's pre-2015 drive to amend the constitution.

"I am happy to see many ex-political prisoners who are involving [themselves] in party politics or parliament or government," said Bo Kyi, a former political prisoner who runs the Assistance Association for Political Prisoners, an organization that has lobbied since 2000 for the release of jailed dissidents.

"The political prisoners who did not join NLD should make their own party," said Zaw Ye Win, a former prisoner known as the "engine doctor," who after his release established a thriving business training mechanics to repair the deluge of new car imports into Yangon after the government's post-2011 liberalization.

The AAPP counts 250 "individuals oppressed in Burma due to political

activities," the majority either sentenced or in jail awaiting trial. Many of those recently charged are accused of breaching the notorious Section 66d of the Telecommunications Law, which has been used to prosecute people accused of insulting the government or military via social media or other online platforms.

The rise in the number of such cases under the NLD has prompted questions about the government's commitment to free speech. Along with Suu Kyi's silence over the recent assassination of Ko Ni, a Muslim lawyer who advised her party on constitutional reform, free speech could give a third party a platform on which to campaign against the governing NLD.