YANGON -- The National League for Democracy may be forgiven for feeling euphoric after its landslide electoral victory in November, when its 28-year struggle for democracy in Myanmar paid off.

The party, however, cannot afford to remain sidetracked; it has to gear up to govern a nation.

The biggest challenge that awaits the party, led by the charismatic Aung San Suu Kyi, is its lack of experienced hands. That big victory two months ago swept a tide of rookies into office. Getting them ready for the transition of power, slated for March, is a top priority.

All that inexperience is already making some people nervous about the country's immediate future. 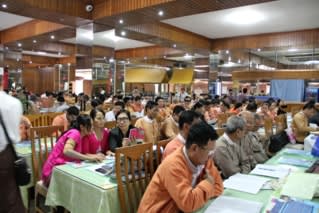 Newly minted NLD lawmakers attend a training session organized by the party to help them prepare for national politics at a Yangon hotel on Jan. 10.

Roughly 200 young, newly minted NLD politicians on Sunday gathered in a hotel here to be trained as lawmakers. The session was part of a program that the party began in December. The program teaches 12 subjects, including the constitution, the budget formation process, laws and regulations, and the party's policy manifesto. Lecturers were selected from research institutes and consulting agencies in and outside Myanmar.

To ensure the attendees absorb the basic knowledge essential for efficiently functioning as politicians, the NLD plans to test them.

"After all, 75% of your victory came from the good reputation of party President Aung San Suu Kyi," Win Htein, a high-ranking NLD official and a member of the House of Representatives, told the attendees before their study sessions. "You people, yourselves, have no experience at all. That is why you must learn."

The NLD won a total of 390, or about 80%, of the seats in the upper and lower houses that were up for grabs. Of the winners, 90% were first-time candidates who had responded to the party's open invitation to run for the general elections. Most of them are professionals -- doctors, lawyers and teachers -- who hardly possess any political experience.

While campaigning, Suu Kyi kept telling the public to focus on the NLD's party flag rather than on individual candidates. On the ballots, candidates were listed along with their party flags. The strategy was necessitated by the reality that most candidates were untested. The tactic worked marvelously.

But it is now almost time to govern.

One lesson was hammered home at party headquarters here on Jan. 4. "I don't like people who self-nominate themselves for cabinet portfolios," Suu Kyi said during a celebration of Myanmar's independence day. "I have received letters requesting Cabinet posts from various people. I will penalize anyone who sends me such a letter from now on."

The comments, which came during Suu Kyi's first public appearance of the year, made those in the audience sit up in their chairs. If the party was feeling a hangover from its electoral windfall, its leader sobered it up.

"Do not forget the trust that people placed in you," Suu Kyi continued. "Do not park your cars on the street. You should volunteer to clean up the streets and public spaces in your electorate."

Her words reflected the sense of crisis she feels.

28 years in the making The NLD was founded in 1988, right after the military toppled the socialist government, by people aspiring to build a democratic nation. It is not a stretch to say that the party's history is the history of democracy in the country.

Suu Kyi, the daughter of General Aung San, a national hero behind Myanmar's independence from British colonial rule, has always been at the center of the country's democratic movement. The military junta placed her under house arrest three times for a total of 15 years between 1989 and 2010.

The NLD was able to survive during that difficult period solely because Suu Kyi commanded a strong following among the population. But the party, which has heavily relied on her charisma, today exists as a highly unbalanced institution that lacks anyone remotely capable of filling Suu Kyi's shoes.

The advanced age of the party leadership presents an additional problem. Among the top officials who were on stage with Suu Kyi during the independence day celebration, those who have been supporting her since the party's early days, were all older than their 70-year-old leader.

These seasoned democracy fighters include Tin Oo, the party's chairman. The former defense chief, who crossed sides to join Suu Kyi's fight against the military junta, is 88. Nyan Win, a lawyer and a member of the NLD Central Executive Committee and the party's spokesperson, is 73. Win Htein, a former army officer and an ex-political prisoner, is 74.

The NLD first secured parliamentary seats in a by-election in spring 2012. The 42 members who won then have since served as the party's core. At the end of last year, their average age stood at 59.

The party traces its roots back to student movements and was once full of young members. But after 28 years, many of its charter members are now of advanced age.

The November elections brought in some new blood and pulled down the average age of the NLD lawmakers by 10-20 years, according to a party official. This is a welcome development, but many of the new faces do not know well the party's early struggles. Furthermore, many of the newcomers are said to have run in the elections to chase loftier goals -- high-ranking government posts.

Such ambitions will not be easily realized, especially since Suu Kyi is a pragmatist and may look to retain some of the current government's talent.

In December, Suu Kyi met with Senior General Than Shwe, one of the former rulers under the military junta. At the meeting, requested by Suu Kyi's side, NLD-military cooperation was discussed.

This marked a radical shift in the party's attitude toward the military; fighting the junta had always been the party's raison d'etre. Successive military governments oppressed the NLD and imprisoned many of its members. More than a few high-ranking NLD officials over the years perished in prisons.

The change of attitude appears to be mutual. Than Shwe called Suu Kyi the "future leader" during the meeting.

Around the same time, Suu Kyi set up a special joint committee with President Thein Sein's incumbent government to manage the transition. Cabinet ministers, including former military officers, and high-ranking NLD members have been meeting every week since.

Having seen Suu Kyi's willingness to work with the military and current government, some are now speculating whether she will drop long-held animosity and keep some key cabinet ministers in an attempt to establish a capable government.

However, Nyan Win, the NLD's de facto No. 2, countered the notion that the party lacks enough talent to run an effective government. "My guess is that at the beginning, the current government did not know much, either," he said, "except for how to handle the gun."

As the member of the NLD Central Executive Committee pointed out, the Thein Sein government, dominated by former high-ranking military officials, did not at the start possess government management know-how. Yet it went on to carry out a series of drastic reforms and guided Myanmar's economy onto a growth path. Considering this, it may be unfair to criticize the NLD for a lack of experience.

Still, the country can ill afford an incapable government creating chaos and slowing economic development. As growth in China and other emerging economies decelerates, Myanmar is drawing global attention as one of the few countries with bright prospects.

The incoming government must ensure that the country's economy remains on a growth trajectory. The new NLD lawmakers will play a big role.