Nepal's tragedy, one month on 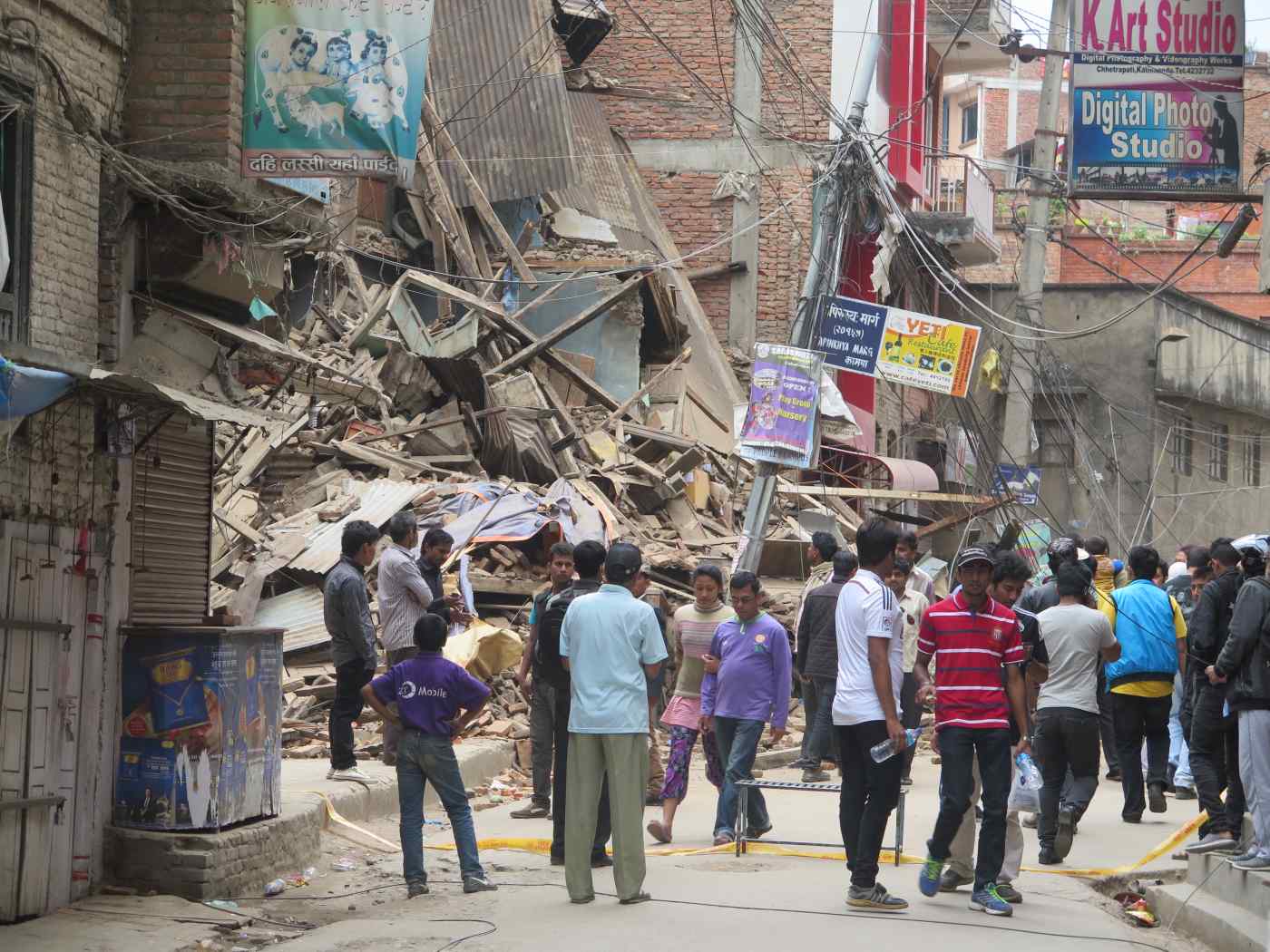 Dazed Nepalis amidst the ruins of their homes in Thamel in the immediate aftermath of the first quake. (Photo by Tom Vater)
KUNDA DIXITMay 25, 2015 09:21 JST | Pakistan, Bangladesh, Sri Lanka, Nepal, Bhutan
CopyCopied

It has been one month since a magnitude-7.8 earthquake struck central Nepal on April 25, killing nearly 9,000 people. The damage to the country is still beyond comprehension: 600,000 homes destroyed, 25,000 schools reduced to rubble, most hospitals in the districts damaged, and 6 million people directly affected. Kathmandu's once-precious World Heritage Sites are in ruins, and the tourism industry has been wrecked. Four hydropower plants have been damaged, and four more under construction will now be delayed. One month later, most government offices in Kathmandu are operating out of tents.

But despite the scale of the disaster, two facts stand out: The quake was not unexpected, and it could have been far worse. A mega-earthquake hits Kathmandu every 80-100 years, and the city's houses and temples sit on top of layers of debris from previous quakes. The first historical record of an earthquake was in 1255, when most of Kathmandu was levelled and the king crushed under his own palace.

The last big quake was in 1934 and registered magnitude 8.3, killing 10,000 people in Kathmandu at a time when the city's population was just 250,000. As of this year, the number had grown to 3 million, swollen by waves of rural migration as people came to the capital seeking jobs and security from a vicious guerrilla conflict that ended in 2006. Most people in the capital lived in unplanned settlements with narrow alleys and badly built apartment blocks. Seismologists had put Nepal at the top of the list of 10 cities around the world most vulnerable to earthquakes and had warned that a catastrophic quake in Kathmandu was not a question of "if" but "when." One United Nations estimate predicted that a magnitude-8.3 earthquake would destroy 60% of the buildings in Kathmandu Valley, killing more than 100,000 people in the first jolt.

In that sense, Nepal got off lightly considering that Kathmandu and everything in it moved 1.8 meters southward and was lifted 1.3 meters on April 25. The death toll in Kathmandu was under 1,400, and while numerous 100-year-old brick and mortar buildings in the city's old quarter and historic temples crumbled and collapsed, 80% of the more recently constructed concrete buildings remained intact. The mobile telecommunications network was jammed but did not go down, Kathmandu airport was only closed for 12 hours because of aftershocks, landslides blocking the highways linking the city were quickly cleared, and electricity was restored within days.

What was unexpected was the high death toll in the mountains to the north of Kathmandu. Some villages there were wiped off the map by avalanches, while in others, 90% of homes were destroyed. Three districts to the east that escaped the main quake were devastated by the magnitude-7.3 aftershock of May 12.

What prevented the death toll from being even higher was that the earthquake was below magnitude 8 and the shaking lasted less than a minute. Additionally, it was a Saturday, so most students were not in school, most offices were empty, and in the farms in the mountains, most families were out in the fields harvesting potatoes or weeding the maize patch.

In that sense, April 25 was a warning to us all to prepare for the magnitude-8.5 earthquake that is expected to hit western Nepal, where tectonic tension is building up because there has not been a major quake for 800 years.

The state's first failure was lack of preparedness for a disaster that everyone -- from international organizations to local groups -- had been predicting. Nepalese politics has been in disarray for the past eight years, with parties' bickering over a new constitution leading to two elections and frequent changes of government. A bill to establish a Disaster Management Authority had been languishing in parliament, and the government was only just starting to move toward better disaster preparedness when the earthquake came last month.

This meant that when disaster struck, there was no proper contingency plan in place, no prepositioning of supplies, no orderly evacuation of people to open spaces. It was local communities and neighborhoods that sprung into action to search for and rescue, with their bare hands, those buried under the rubble.

Volunteers and relief workers started moving out to the mountains as soon as the scale of the disaster became clearer. The government got off to a slow start and seemed overwhelmed even by the deluge of rescue and relief assistance from the international community. Kathmandu's small airport became a bottleneck as more than 800 big jets arrived within the first three weeks.

Then there was the problem of getting those supplies to remote villages. The earthquake occurred in some of the most densely populated and rugged mountain regions of the world. The settlements, however, are spread out across the mountains, making it difficult to reach everyone. Although the Indian and Chinese air forces and the U.S. Marines brought in helicopters, Nepal needed at least 100 such aircraft to meet the vast need.

One month later, Kathmandu is still rocked by aftershocks, but shops have started to open, and the streets are beginning to see traffic jams again. The crisis has given Nepal an opportunity to reverse the outflow of young people to India, the Gulf states and Malaysia by creating jobs in reconstruction and rehabilitation. Nearly 20% of Nepal's population works abroad, and although they send $5 billion home every year, the absence of able-bodied men from the workforce has an economic and social cost.

It was peak spring tourist season when the earthquake hit. About 100 trekkers perished in avalanches in the Everest and Langtang areas. Tourists already in Nepal fled, and others cancelled trips. The Thamel tourist area of Kathmandu is deserted. Even scenic Pokhara, which was not affected by the quake, is empty. Hoteliers are hoping visitors will start returning in July and August, which is the tourist season for such trans-Himalayan regions as Mustang, Dolpo and Tibet.

Our newspaper, the Nepali Times, has started the "Help Nepal by Visiting Nepal" campaign which is gaining traction on social media under the hashtag #VisitNepalAutumn2015. What the international media does not tell the world is that large parts of Kathmandu are not in ruins, only two trekking areas have been damaged, the airport is functioning normally, and tourist hot spots like Pokhara and Chitwan were not affected.

On April 25, as the quake hit, 12 of us from the Nepali Times were hiking up on a ridge overlooking Kathmandu when the entire mountain shuddered and swayed. We looked down at the pall of dust that had shrouded the city below and were convinced that Kathmandu had been destroyed. We feared for our families and were happy to see when we got back down that they were all safe.

Since then, we have moved the newsroom to tents in the garden to escape the aftershocks, or to wherever we could find electricity and Wi-Fi connections. We have gone into digital-first mode, uploading everything online and compiling articles once a week for the print edition on Fridays. Our printing press was badly damaged but is still in working condition. Needless to say, the last four issues have all been about the different phases of the rescue, relief and rehabilitation, telling miraculous stories of survival, of the generosity of strangers, and of Nepalis helping Nepalis.

In many ways, we were lucky. Despite the tragic loss of life, Kathmandu and Nepal got off lightly this time. It was a test, a rehearsal, and we have been warned to be better prepared for an even bigger quake that one day is sure to hit us. Kunda Dixit is editor of the Nepali Times newspaper in Kathmandu