YANGON -- During the weeks leading up to Myanmar's Nov. 8 elections, some of Yangon's tech set decided to do something about the mix of disinformation and disinterest they perceived among many of their peers -- despite the country's first fair election in a quarter century being just weeks away.

Aimed at getting the word out about the vote, and about the candidates, recent weeks have seen a flourishing new crop of smartphone and social media-based applications -- on the back of a communications revolution in a country that was mostly cut off from the outside world during five decades of army rule.

Some of the applications are no more than decorative, such as Chaparty, which allows Myanmar's Facebook users to graft the logo of their preferred political party onto their Facebook wall.

Thura Hlaing, a Malaysia-educated app developer who came up with the web-based Chaparty, believes the app "will help voter turnout," even for the many young Myanmar people who, like him, are not politically active.

"I'm far from a hardcore activist, though I do take some interest and this election is important," Thura Hlaing added, discussing why he got into politically-themed apps. "But many people my age do not really care about the election," he said. 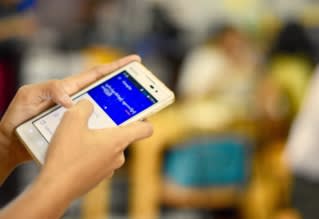 Chaparty has provided a useful indication of how the election might go, with 93% of its 150,000 users to date opting for the logo of the National League for Democracy, the party headed by the revered former political prisoner, Aung San Suu Kyi.

And while Chaparty does no more than fire a party logo onto a user's Facebook page, others apps, such as MVoter, are more in-depth, collating a litany of information covering the election's 91 parties, 330 constituencies, and 6,000-plus candidates -- data that voters might otherwise find hard to access.

The national election commission has been widely criticized for partisan statements made by its chair, former general Tin Aye, who said he wants the ruling Union Solidarity and Development Party to win. The commission has also come under fire for a chaotic update to the voter list, which saw thousands of complaints from people who had been left off the list at their presumed polling stations.

"Before the apps came out nobody knows which constituency they are in, where to vote, who to vote for," said Thiha Aye Kyaw, of Phandeeyar, which describes itself as an information and communications technology hub "designed to support social innovation, civic tech and ICT4D/M4D in Myanmar."

Thiha Aye Kyaw criticized what he saw as the patchy voter education efforts carried by nongovernmental organizations as well as the election commission, and said that it was left up to the initiative of others to fill in the gap.

Among those with an interest, of course, are Myanmar's political parties. Suu Kyi, the NLD leader, told the media on Nov. 5 that her party's countryside network of activists were carrying out voter education work, which, no doubt, she hopes will ensure a high turnout and an NLD win.

"The NLD has decided as a party it is up to us to fill in the gap," Suu Kyi said, discussing voter education.

Another newly launched app is New Niti, which debuted on Oct. 17, and which aims to offer wider civic education but includes a chapter on the Nov. 8 elections.

Underpinning the viability of the apps is the increased uptake of cellphones and smartphones in Myanmar, after Norway's Telenor and Qatar's Ooredoo began operations in Myanmar, having being awarded telecoms licences in mid 2013.

"I think the drop in prices of SIM cards and smartphones, and the increased influx of cheap Android phones, particularly from China, have really been key developments enabling this kind of project. A few years ago, I doubt it would have been very useful to roll out this kind of project," said Angelika Kahlos of OneWorld, the NGO promoting development via mobile technology which came up with New Niti.

Myanmar ICT for Development Organisation, or MIDO, carried out a survey earlier in 2015 that suggested that 70% of Myanmar's mobile phone owners use a smartphone, contributing to skyrocketing Facebook followings for Myanmar's main news outlets.

According to Socialbakers, which compiles data on social media use worldwide, the three biggest overall Facebook audiences in Myanmar are for the news outlets 7 Day, Eleven Media and The Irrawaddy, each of which have more than 3 million followers on the social network.

A note of caution, however, for those social media evangelists who might see the advent of apps and the increasingly widespread use of Facebook and smartphones as ensuring that the upcoming election will be completely free and fair.

"Citizens will need to be able to vote freely, without any kind of intimidation or threats, and confidentially.There shouldn't be any buying of votes or other tricks or irregularities. Unfortunately,  this app [New Niti] can't prevent these things from taking place," said Angelika Kalhlos.

The election is being billed as Myanmar's first free and fair vote in 25 years, and with the NLD hotly favored to win, the stakes are high, as the outcome may see diminished army control, despite a 2008 constitution that allocates 25% of seats in parliament to the military.

One app, Kyeet (which means look), allows users to send information about polling and vote counting as part of a planned crowdsourcing effort to help ensure a transparent election outcome.

After Joko Widodo and Prabowo Subianto fought a vitriol-laden presidential election contest in Indonesia in 2014, the eventual loser, Prabowo, challenged the election result based on what he claimed were sample counts showing him to be the winner.

However Indonesia's tech heads came up with a range of applications and platforms allowing people to crowdsource ballot counts from around the country, and draw up tallies that closely mirrored the eventual official result.

Htike Htike, program director at MIDO, which developed Kyeet, said that her team looked at the Indonesia example.

"The idea is that the app will allow us to crowdsource citizen accounts of the elections," she said.

Though the app, which was launched two weeks ago, has only 1,700 users so far, Htike Htike expects this to pick up on election day and as the count takes place.

"We added a feature that allows users to SMS what they find, if the Internet or 3G network is not available," Htike Htike said.

"We hope Kyeet and all the other apps can help ensure a fair election."