WELLINGTON -- The gamble by New Zealand's center-left Labour Party to appoint the young and charismatic Jacinda Ardern as leader is paying off, as it is enjoying a surge in support and now faces the possibility of grabbing power from Bill English's ruling National Party in elections on Sept. 23.

Reflecting the rise of a new generation of youthful and social media-savvy leaders such as France's Emmanuel Macron and Canada's Justin Trudeau, Ardern's popularity has been dubbed "Jacindamania" and the "Jacinda effect" by New Zealand media. Prime Minister English, whose party has been in government for nine years, has dismissed her appeal as "stardust."

New Zealand's trade and international relations policies would likely be little changed under a Labour-led government, given the country of 4.8 million relies heavily on agricultural exports and tourism. But its campaign focuses on social and environmental issues with some international implications, including plans to sharply reduce immigration to ease the pressure on housing and infrastructure.

Such plans include restricting foreign buying of residential property and a possible withdrawal from the Trans-Pacific Partnership.

Early-August polls showed Labour trailing the center-right National Party by 23 points, prompting the party to replace leader Andrew Little with Ardern, his 37-year-old deputy. Her warm personality and optimism have struck a chord with many New Zealanders and poll ratings have soared almost 20 points in five weeks.

In the Sept. 7 Colmar Brunton poll, Labour had jumped to 43%, and National had declined to 39%. Ardern was favored by 36% of those surveyed as prime minister, compared with English's 31%.

But poll findings have been volatile in the final lead-up to the vote: The latest Reid Research survey on Tuesday puts National ahead by nearly 10 points while a Radio New Zealand poll of polls has the two parties neck-and-neck.

"Women and people under 40 in particular are tending to realign their vote and that realignment is going to Labour," she said. 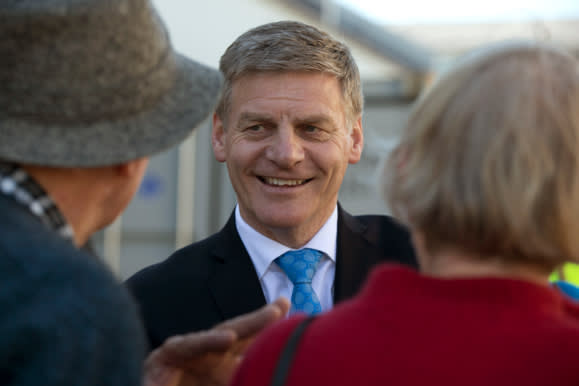 English was widely respected as finance minister for eight years before taking the top job after the shock resignation of the popular John Key in December last year. The 55-year-old from a farming family in New Zealand's far south lacks Key's relaxed charm and his appeal for votes is based on his government's record of sound economic stewardship.

But Ardern is promising generational change and a raft of social and environmental reforms.

"My generation has been sold down the river by your government," Ardern told English in a televised debate on Sept. 7. She later told a party rally that economic growth must be accompanied by greater equality.

"For the sake of so many left behind these past nine years, we can't afford to stick to the status quo."

English said Ardern, a former Mormon and one-time president of the International Union of Socialist Youth, lacked the experience to be prime minister.

"On our side we have a strong record of proven success and a confident vision to take New Zealand forward. Since 2008, we've faced a recession, the global financial crisis and devastating earthquakes," he told the National Party's campaign launch.

"Fast forward to 2017. We now have one of the best performing economies in the world and the books are in surplus." Economic growth is around 3%, although economists have pointed out that this has largely been driven by immigration. Gross domestic product per capita grew just under 1% in the year to March.

House prices in New Zealand's largest city, Auckland, average around 1 million New Zealand dollars ($730,000), and although prices have recently flattened in the main cities, affordability is a key election issue.

Labour plans to stop non-residents from buying existing homes, matching rules in Australia. But there is disagreement on how much impact overseas investors, particularly the Chinese, have had on house prices and English described foreign buying as a "peripheral issue."

But Ardern said curbs on foreign investment in New Zealand housing would be a priority for a Labour-led government.

"Too many families are missing out on buying homes so we'll introduce that law to ban overseas speculators from buying existing homes and we'll do it by Christmas," she told a Labour rally.

This proposed ban is also behind Labour's decision to seek a renegotiation of the TPP if the 11 remaining countries decide to continue with implementation following the withdrawal of the U.S.

The current agreement would not allow New Zealand to introduce curbs on foreign property investors. Such a ban also would breach provisions of a free trade agreement with South Korea and also has implications for the FTA with China.

Ardern said in a radio interview that a Labour government wanted to be part of the TPP but not at the expense of restricting foreign property sales.

Under Labour policy, immigration would be cut by 20,000 to 30,000 a year. The focus would be on reducing work visas for those with lower skills, limiting student visas for low quality courses and restricting the right to work for foreign students completing lower level qualifications. Some low quality courses are allegedly a front for immigrants whose main aim is to work in New Zealand.

But the policy changes should not be interpreted as a sign of growing nationalism or insularity, as seen in the U.S. following the election of President Donald Trump or Britain's vote to leave the EU, commentators said.

"It would still be a very internationalist and outward-looking government. They do want protections around New Zealand land ownership as a condition but they're still quite keen to carry on with development of international trade relationships," Hayward said.

Bank of New Zealand Chief Economist Tony Alexander said business confidence may fall initially if Labour won because of the typical uncertainty surrounding a new government. But there was likely to be no significant change to monetary policy and "reasonably sound fiscal management" would be expected, he said in a report.

Since New Zealand adopted a proportional voting system in 1996, no single party has been able to govern without the support of one or more minor parties. Labour is allied with the Green Party but they would need to lift their current levels of support to win control of Parliament.

In the most recent Colmar Brunton and Reid Research polls, the Greens support had fallen to around 5% and Winston Peters' populist New Zealand First Party had 9% and 6% respectively. Peters has previously served in governments led by both Labour and National.

Early voting began on Sept. 11, with predictions that up to half of voters could cast their ballot before the official voting day. Mixed signals from the polls suggest the result could be very close.

"I think there's a very strong chance Labour will win this election but it's going to be an incredibly tight race," Hayward said.