North Korea can now target Japan with a nuclear missile

Behind the scenes, Russia pulls the strings in a proxy fight with the US

TOKYO -- One of North Korea's missile test-firings in May suggests that the country's ballistics development program is nearly complete.

On May 14, Pyongyang launched an intermediate-range missile, what it calls a Hwasong-12. The projectile reached an altitude of more than 2,000km -- well out of the Earth's atmosphere, which is about 480km thick -- then hit the Sea of Japan while traveling at least Mach 15.

Mach 1 is the speed of sound. Mach 2 is twice that.

That the missile did not disintegrate upon its re-entry into the atmosphere shows that it is capable of carrying and delivering a warhead.

Furthermore, it is believed that the missile's electronics were able to keep measuring the inside temperature, flying speed and perhaps other data -- and send the information back to ground control.

Sometime later, a national security source who is familiar with Japan's missile defense circumstances told me, "North Korea appears to have completed the development of a Japan-targeted nuclear missile."

There are missile defense systems designed to target a missile at each of these stages. The Aegis anti-missile system used by Japan's Maritime Self-Defense Force tries to intercept missiles at the second stage. Just not at 2,000km. An advanced Aegis system can send an intercept missile up to 1,000km.

Japan could possibly consider deploying a land-based missile defense system like Aegis Ashore, but such systems offer no guarantees. Moving targets are hard to hit, especially when they're moving at Mach 15.

The Self-Defense Forces also have Patriot PAC-3 surface-to-air intercept missiles at their disposal. These are designed to intercept a missile as it re-enters the atmosphere -- but not those traveling as fast as the Hwasong-12.

Terminal High Altitude Area Defense systems, also known as THAAD, could be deployed in Japan one day, but even their probability of interception is low.

Even though Japan has spent massive amounts deploying U.S.-made missile defense systems, it still has no shield against North Korea's latest missile.

Let's look at a related matter: How did North Korea manage to accelerate its missile development program? I believe another country is aiding Pyongyang.

A national security source recently told me Russia has been inviting young, talented North Korean engineers to its research facilities, then teaching them about key ballistic missile technology.

So today's North Korean engineers are at least familiar with Soviet and Russian missile technologies. 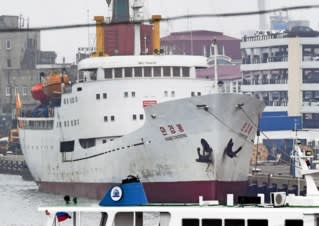 A North Korean cargo-passenger ship arrives at Vladivostok on May 18.

Earlier this month, Russian President Vladimir Putin defended Pyongyang's nuclear development program, saying that a small country like North Korea has no other option but to posses nukes if it wants to maintain its independence and security.

Russia has also OK'd a cargo-passenger ship route between the two countries.

Moscow seems to becoming increasingly supportive of Pyongyang. But its military aid to the country goes way back.

Time for another question: What could Russia hope to gain by helping to arm North Korea with nuclear missiles?

We have to take in the big picture here. Russia has been supporting the regime of Syrian President Bashar al-Assad, while the U.S. and other Western powers oppose Assad. This is why the Syrian conflict is often referred to as a proxy war between Russia and the U.S.

Moscow is also building up its military presence on its borders with Estonia and Latvia -- two former Soviet states that chose independence after the Soviet Union disintegrated and later became members of NATO.

NATO's founding principle is collective self defense by all members should one be attacked by external forces. It began in 1949 with 12 member states and now has 29.

From our broad perspective we see Russia is applying pressure in the Middle East as well as in Eastern Europe. If it can do the same in Northeast Asia, it can dilute the U.S. military's focus. In this sense, North Korea is a tool Russia is using -- and with little effort -- to annoy the U.S.

Like NATO, the U.S. and Japan have a security pact that calls on the U.S. to defend Japan should the Asian nation come under attack.

Russia could also be using North Korea as a testing ground for its missile capabilities. The treaty on intermediate-range nuclear forces, agreed to between the U.S. and Russia, bans both parties from possessing such weapons. Why break such a treaty when North Korea is willing to test your technology for you?

Meanwhile, Japan is obsessed with the idea of enhancing its missile defense systems -- despite the apparent impossibility of such a mission.

The 2011 earthquake and tsunami revealed that Japan lacks satisfactory quartermaster and field support capabilities. There have been no improvements in the intervening years. This is largely because the government has focused on acquiring extremely expensive -- not to mention fallible -- anti-missile systems. But without sufficient field support, how can the country's self defense forces take on enemies in a conventional war?

The government should be able to oversee all of its defense and security needs.