One year on, first poll test looms for Myanmar government

YANGON -- On April 1, Aung San Suu Kyi's National League for Democracy faces its first electoral test since taking power in Myanmar on the back of a landslide election win in 2015.

The governing party will compete for a total of 2 million votes in all bar one of 19 by-election contests -- seven of which are for regional parliaments -- for seats vacated mostly by incumbents who joined the NLD-led government as ministers.

With most of the contested seats lying in NLD strongholds in central Myanmar, the governing party is unlikely to face any major electoral setback for what are just 12 national legislature seats out of a total 664 in the country's upper and lower houses of parliament. 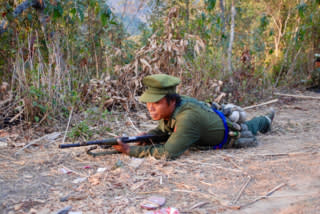 Ongoing fighting between Myanmar's army and ethnic militias has shown how little influence Myanmar's civilian government has on the military. Here a Kachin Independence Army soldier is pictured during 2012 fighting near the Myanmar-China frontier. (Photo by Simon Roughneen)

But with economic growth and foreign investment down slightly on previous years, sectarian violence in Rakhine State in the west and conflict between military forces and ethnic rebels in Kachin and Shan states in the east and north of the country, Aung San Suu Kyi has had a difficult first year as de facto leader of Myanmar.

Foreign investment in the financial year ending March 31 is likely to be down by around 25% to 30% compared with the $9.4 billon record achieved in the last year of the previous administration led by Thein Sein's Union Solidarity and Development Party. Economic growth too has dropped, albeit slightly, to around 6.5% for fiscal 2016-17 from 7.3% the year before -- but according to the World Bank, the country will rebound to above 7% growth after 2017.

The NLD-led government is dealing with the formidable challenge of transforming a country that is barely five years out of a half century of military rule. The "dark decades," as many in Myanmar see it, left tens of millions of people mired in rural poverty and fundamentals such as electricity supply and education standards lagging well behind neighboring countries.

Internationally the NLD government has been tarnished by the army's reprisals in northern Rakhine state, close to the Myanmar-Bangladesh frontier, after Rohingya militants killed nine border police in October 2016. The subsequent military actions saw tens of thousands of Rohingya, a mainly stateless Muslim minority numbering around 1 million, flee to Bangladesh. Refugees have given harrowing accounts of military and police atrocities to media and to United Nations officials. A U.N. human rights delegation met with hundreds of refugees in Bangladesh and in February produced a grim report that cited extrajudicial executions, torture, arbitrary detention, rape and destruction of property.

The government said through the foreign ministry that it "disassociated itself" from a U.N. Human Rights Council meeting on March 24, in which the European Union called for the dispatching of a "fact finding mission" to Myanmar in the wake of the alleged atrocities.

And while the government had previously said it would investigate any allegations of wrongdoing by soldiers, the powerful army chief Senior General Min Aung Hlaing, speaking at Myanmar's annual military parade on March 27, strongly defended the military's operations in Rakhine and repeated the official line that the Rohingya are not a Myanmar ethnic group, but rather "Bengali" immigrants from Bangladesh.

The army holds 25% of parliament seats which gives them a veto on major constitutional changes, such as allowing Aung San Suu Kyi to become president -- a position she is barred from because her two sons hold foreign citizenship.

The state counselor has been relatively silent on the miltary's operations in Rakhine state, a reticence that is unsurprising in the light of her party's refusal to field Muslim candidates in the national elections in 2015, despite the fact that Muslims make up an estimated 4% of the country's population of about 54 million. With public opinion seemingly in favor of the army's actions in Rakhine state and for the most part implacably opposed to the view that the Rohingya are Myanmar citizens, Aung San Suu Kyi is seemingly unwilling and unable to rein in the army.

Similarly, the government has had little success in advancing the country's wider peace process with the multitude of ethnic minority militias that have periodically waged insurgencies almost since the founding of the modern Myanmar state, then known as Burma, after World War II.

Aung San Suu Kyi's pledge to push ahead with efforts to achieve a nationwide peace deal, the groundwork for which was laid by the previous administration, is yet to achieve concrete progress in conflict zones or at the negotiating table, with fighting between government forces and a coalition of ethnic militias in Shan and Kachin states close to the Myanmar-China border, and postponements of wider peace negotiations. Min Ko Naing, left, a leading 88 Generation member, talks with Tin Oo, a founder of the National League for Democracy, before a 2014 rally for constitutional reform in Yangon. (Photo by Simon Roughneen)

Arguably Aung San Suu Kyi's greatest success since her election triumph has been craftily side-stepping the constitutional ban on her presidential aspirations after her party's rout of the then-governing USDP in November 2015.

By creating the new position of state counselor -- equivalent to prime minister in a western presidential system -- and taking the dual role of foreign minister, Aung San Suu Kyi has been able to take control of government and represent Myanmar at international fora such as the Association of Southeast Asian Nations, while relegating her hand-picked "proxy," President Htin Kyaw -- a long time friend, to a figurehead role.

To many, the state counselor's apparent reluctance to delegate or share decision-making has resulted in an overly centralized and personalized style of governance. It is a modus operandi that is unlikely to erode her popularity so soon after winning 80% of contested seats in the November 2015 election, and so early in her drive to tackle a multitude of cross-cutting and complex challenges. Obstacles may come further down the line if the 88 Generation of former student protest leaders and ex-political prisoners makes good on plans to form a political party ahead of the next national elections in 2020. 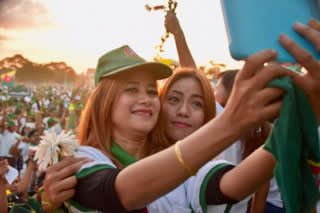 Supporters of the ousted USDP pictured during an election rally in Yangon ahead of the Nov. 8 2015 vote. The USDP was routed in the election, but hopes to kickstart a comeback in the upcoming by elections. (Photo by Simon Roughneen)

For now, Aung San Suu Kyi's blindsiding of the military with the creation of the state counselor role has heightened tensions between the NLD and the army, which appears reluctant to step back from its powerful role in Myanmar politics, where it holds three security-related ministries and can assume power in the event of a "national emergency."

Echoing the line by army leaders since Myanmar began its transition to democracy in 2011, Commander-in-Chief Min Aung Hlaing told the European Union Military Committee in September 2016 that "Myanmar still needs the help of the Myanmar armed forces to adjust, as the country does not have much experience in operating a multi-party, parliamentary democracy."

And while it is unlikely that the USDP will make much of a comeback at the April 1 by-elections, the brutal, broad daylight assassination of Muslim lawyer Ko Ni, an advisor to the state counselor on constitutional issues, at Yangon Airport in January has deepened distrust between the civilian and military wings of Myanmar's government, with former army personnel among those accused of involvement in the murder.