MELBOURNE/SYDNEY -- Malcolm Turnbull is set to continue as Australia's prime minister after opposition leader Bill Shorten on Sunday conceded defeat in the national election -- eight days after voters went to the polls.

Shorten's announcement came as Turnbull's conservative Liberal-National party coalition inched closer to the minimum seats required -- 76 out of 150 -- to govern in its own right. However, the coalition may still need the support of independents and minor party members if votes yet to be counted contribute to it falling short of that majority.

"I respect that Mr Turnbull has won government -- be it a minority government or a majority of one or two seats," Shorten said on Sunday.

That was still the question as Turnbull declared victory about an hour later. With votes still to be counted, it remained unclear whether the coalition would secure a majority.

With around 80% of the votes counted on Sunday, the Australian Electoral Commission had the coalition ahead in 76 seats.

Turnbull had used the days prior to shore up support from crossbenchers. Three out of the five elected had agreed to back the coalition when it came to supply and confidence matters, a move that effectively ended talk of Shorten leading a minority government or Australians being forced back to the polls.

"It looks like he [Turnbull] will cross the 76 seat threshold and, even if not, he has support from a couple of independents," said John Warhurst, emeritus professor of politics at Australian National University.

"We've won the election," he said.

But huge challenges remain for the government. With a slim majority in the House of Representatives in Canberra, it could take little to potentially destabilize the parliament.

This was a point noted by Bob Katter, of the tiny Katter's Australian Party, who holds a crossbench seat -- and therefore important influence -- in the lower house. Katter compared the situation to 2010's hung parliament situation, out of which Labor's Julia Gillard formed a minority government with support from independents.

"You take the risk of what happened to Julia Gillard -- you are flying on a couple of votes, even a little nobody like me can knock you out of the ball game," Katter said. Then there is the matter of the Senate. Both main parties can still claim up to 30 seats, but will likely have to depend on an eccentric array of minor-party senators to pass laws. An estimated nine crossbenchers -- some of them from the far right -- and about the same number of senators from the left-wing Australian Greens will have pivotal votes on legislation.

"There are only two threats to Malcolm Turnbull," said ANU's Warhurst. "He needs to carefully manage the balance of forces within his own party, and secondly, though it could be a week or two before we know the exact balance of forces in the Senate, it will likely contain a lot of people with a protectionist view of trade and the economy."

Despite the uncertainty ahead, some members of the government have been positively buoyant about the election result for days.

Prominent frontbencher Christopher Pyne declared the coalition victorious on Friday. Senator Arthur Sinodinos, the coalition's cabinet secretary, seconded that view on Sunday morning. The coalition, he added, had won a mandate to implement its economic policies, including a controversial company tax cut. While the government has said this tax cut will help create jobs, the Federal Treasury has predicted it will cost some $38 billion over the next decade.

"We have a mandate, and we should proceed with that mandate and the budget is part of that," Sinodinos said. "I think we will put up all the elements of the budget."

As votes were being counted in the week after the July 2 poll, ratings agency Standard & Poor's lowered Australia's stable credit outlook to negative. There was a one-in-three chance, S&P warned, that it would downgrade the nation's AAA credit rating by 2018 if parliament failed to introduce savings or revenue measures that reduced its budget deficit to a "balanced position" by the early 2020s. The budget deficit this financial year reached $28 billion.

"If it occurs, S&P will presumably lower the rating one notch to AA+ and the obvious concern is with such a high level of foreign ownership of Aussie debt (60.4% as of March 2016) that we may see forced sellers, which could cause sizeable capital outflows [from] Australia," said Chris Weston, chief market strategist at IG in Melbourne.

Turnbull securing support from crossbenchers will allay some concerns over the government's ability to pass budgetary legislation.

"It's vital that this parliament works," he said on Sunday. "We need to ensure we have a strong economy in the years ahead."

Labor has backed Shorten to continue as party leader, putting only his name forth in a mandatory leadership vote -- and silencing speculation of a challenge.

In an email to Labor party supporters and volunteers, Shorten followed up his concession speech with a note of minor triumph, contrasting this year's closely fought election with the rout suffered by Labor in 2013. "We are united, we have found our voice," he wrote. 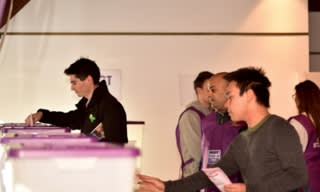 Despite victory, pressure remains on Turnbull. His party has lost a significant number of seats -- it began the campaign with 90 -- and is smarting from what was supposed to be a comfortable win on July 2. That was what was predicted soon after Turnbull toppled his predecessor, Tony Abbott, last September to gain the top job. Abbott, from the party's far right, had helped the coalition storm to power in 2013, but had quickly lost touch with the people -- something reflected in opinion polls -- and his party-room colleagues.

Now it is Turnbull who will be under pressure from within his own party. Michael Kroger, the Liberal Party president for the state of Victoria, is one person on the right of politics who has already criticized Turnbull in the media over his economic policies.

It is not going unnoticed in Australian political and business circles.

"Clearly Turnbull has suffered from the way he came to power, a poorly managed budget and the 'perception' that he stands for business as usual so what was the point of getting rid of Abbott," said Mark Evans, director of the Institute for Governance and Policy Analysis at the University of Canberra.

The reduced number of seats for the coalition not only reflects the rise of independents and smaller parties, but the fact that Turnbull went to the polls a mere nine months after seizing control from Abbott.

But Turnbull's party coup replicated similar putsches inside the Labor Party when it was in office before 2013 and meant that Australia had its fifth prime minister since 2007. Such churn has left voters increasingly dissatisfied with the two main parties.

On the eve of the election, Turnbull pleaded with voters to ignore the smaller parties and independents and eschew what he dismissed as "a protest vote." But that plea may have backfired, at least with some of the electorate.

While all bar five of the 150 seats in parliament will go to the coalition and Labor, smaller parties and independents won the backing of more than a fifth of voters, prompting calls for changes to the electoral system among smaller groups.

"Proportional representation is badly needed in Australia," Sydney-based Greens Senator Lee Rhiannon told the NAR. The Greens won 10% of the vote, an outcome that will most likely be rewarded with just one lower house seat.