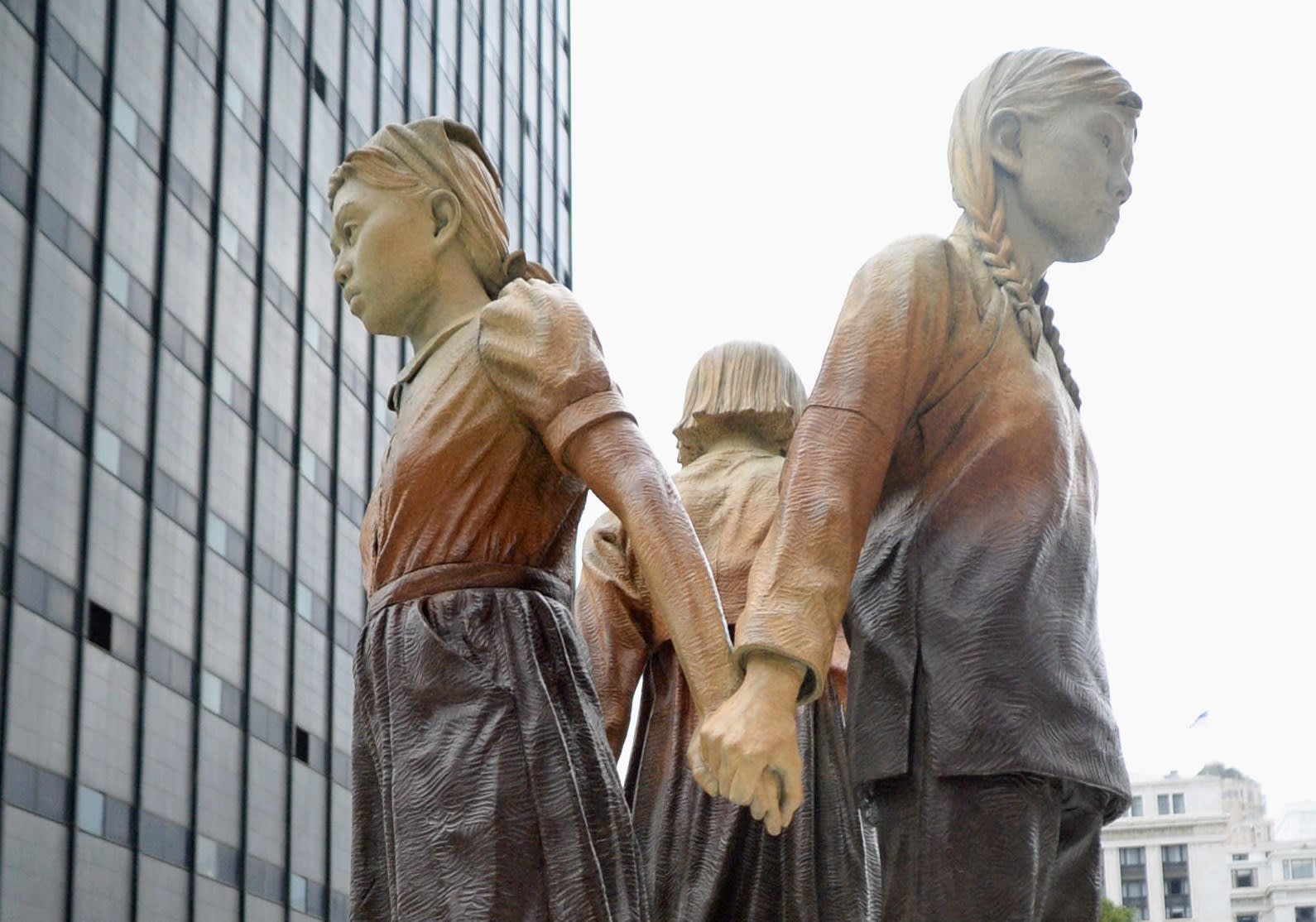 The memorial for "comfort women" in San Francisco's St. Mary’s Square represents girls from Korea, China and the Philippines.   © Kyodo

OSAKA -- It is a scene to which Osakans have become accustomed: tourists, mostly from South Korea and China, snapping selfies in front of the city's storied Glico "running man" billboard. Now there is real concern those visitors might head elsewhere, angered by a political move Osaka felt obliged to make.

After six decades, Osaka recently decided to end its sister-city relationship with San Francisco, after the U.S. partner accepted a private donation of a "comfort women" statue. The Japanese city has yet to send a formal notification, but it is all but a fait accompli. San Francisco's monument has three figures holding hands on a pedestal, representing girls from Korea, China and the Philippines. It was installed in September with an inscription describing the wartime women as sex slaves -- a view that differs from Japan's official position. Osaka Mayor Hirofumi Yoshimura had been warning that he would cut the ties between the cities if San Francisco allowed the statue.

Now the mayor has been forced to follow through. But Osaka has much to lose: Aside from all those tourists, the western metropolis is also competing with Paris for the right to host Expo 2025. It is hoping for a repeat of the infrastructure boom it enjoyed the last time it hosted the event, in 1970. Posing with the Glico "running man" billboard is a must-do for visitors to Osaka.

Osaka is scheduled to make a bid presentation next November, and political baggage could hurt its chances. It certainly cannot afford to be seen as a hotbed of extreme-right sentiment.

At the same time, the city could not easily ignore a statue the Japanese government sees as an unnecessary provocation by Asian-Americans. After all, Japan thought it was resolving the comfort women issue for good in 2015, when it struck a deal with the South Korean government. Under the terms, Tokyo expressed its regret and set up a foundation for the victims.

So Osaka made the decision to cut the relationship on Dec. 13. It has also decided not to subsidize future exchange projects with San Francisco.

In the 1950s, U.S. President Dwight Eisenhower proposed the concept of sister cities to strengthen ties between peoples and help prevent conflict.

Nagasaki signed Japan's first such pact -- with St. Paul, Minnesota -- in 1955, according to the Council of Local Authorities for International Relations. There are more than 1,700 of the partnerships today.

Osaka's link with San Francisco, forged in 1957, is the sixth-oldest.

One Osaka official said San Francisco requested the partnership, since both are commercial port towns. Various exchanges -- including reciprocal visits by delegations and short-term stays by high school students -- have strengthened the bond.

Despite the decision, that bond will not be broken immediately. Ed Lee, the Chinese-American mayor who accepted the statue in November, died of a heart attack on Dec. 12. An election to choose a successor is scheduled for June 2018, and Yoshimura has said it is "not appropriate" to notify San Francisco while there is a political vacuum. As a result, the formal notification will come after the election.

Deep down, Osaka officials are likely hoping the next mayor adopts a different stance. This is unlikely: The resolution calling for the statue received unanimous approval from the San Francisco board of supervisors. No candidate will come out against the statue in such an environment.

Next summer, a 60-year relationship is set to be consigned to the history books. Soon, Osaka will find out how heavy a price it has to pay.